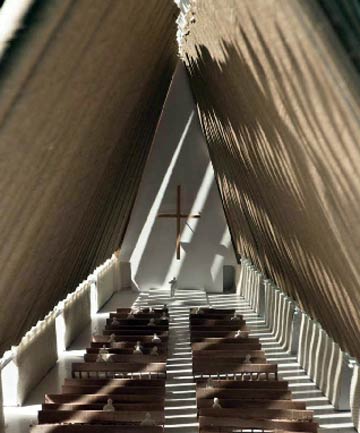 As far as Architectural SuperStar news stories goes – this one has to be a biggie, surely.
Japanese architect Shigeru Ban designing a new cathedral for Christchurch out of cardboard? Fantastic !

Despite lots and lots of anguished stories about heritage buildings being destroyed, or at least – not saved, this is the opposite story – a ray of hope and light in an otherwise derelict future for NZ’s (formerly) second-largest city.

Shigeru Ban is an architect that virtually no one in the architectural community needs an introduction to, and yet outside of that narrow circle, probably nobody has a clue. Amongst architectural students, he is a Starchitect. He appeared a year or two ago in Wellington, and packed out the audience from what I hear – the pulling power of an architect who designs cool stuff using only simple cardboard forms evidently grabbed the hearts and craftknives of the assembled massed students. Plus, he’s a real sweety, as can be seen here.

Of course, there was that mild wrangle between Ban’s designs for the tsunami victims, and possible issues as to whether what he had designed was ethically suitable or morally usable – Ban said his houses were great, others muttered otherwise – but his show of work seemed to speak volumes. He first came to prominence – oooh, ages ago, where he won a competition (as a student?) for emergency housing using the basic found materials. His emergency housing is pretty basic, but it is also lightweight, and surprisingly insulative, being composed mostly of timber and intervening air. The simple cardboard tube is his weapon of choice – a strut, a stud, a lightweight member, he coaxes it into performing roles it has not otherwise been considered for.

The cathedral design is a simple plan – on a site yet to be confirmed – where the nave will be completed of two rows of inclined tubes, touching at the top. The size, apparently, is to be similar size to that of the existing ChristChurch Cathedral, now lying in a state of, if not ruins, then at least can we say: a state of unhappy sanctity. Is that too polite? Too much beating round the burning bush? OK – it’s munted. Buggered. It has, literally, shuffled off this mortal coil and is singing with the choir invisible. It is, an ex-Cathedral.

So: what about this one instead? Ban San has said that “the building would cost $4 million, take three months to build and could seat 700 people. A triangular stain-glass window could be designed by a local artist” while the Cathedral Dean said that “he hoped the building could be completed in time for the one-year anniversary of the February 22 quake, and that they are looking for an inner-city site for the cathedral, which could be used by orchestras, other churches and community functions.”

While the cathedral as proposed is not as fancy as some of the other projects proposed by Ban, he has done some gorgeous projects before, including a church in Kobe, tha tis now into it’s second decade, and currently resides in Korea:

He’s also a dab hand at splicing these bits of cardboard tube together – here’s a giant lattice work gridshell that he created:

and here is a typical jointing detail:

….there are still some issues to sort out – and surprisingly, getting the locals onside looks like it might be one. The pages of the Press are overrun with grumpy numpties, if these letters to the Stuff Press are anything to go by:

Anne : “We do not need a $4,000,000.00 temporary cathedral. The money would be much better spent on the truly needy people of Christchurch. Sadly there appears to be no common sense in Christchurch. We need real planning. The only good thing is that it is so hard to get planning permission for anything and insurance would be impossible that we may never need to worry about the idea. Shame on Peter Beck”

Glenn M : “Why pay $4,000,000 for a “temporary” cathedral, in cardboard no less. Utterly ridiculous idea. Come on. All you people who think its a “wonderful idea” need to screw your heads on the correct way round and re-think. What could you do with the 4 million that would benefit the locals in a more “appropriate” way? How about employing more building and property assessors who are qualified to do this job and speed up the assessment process so people who really need to move on with their rebuilding and their lives, can! If they are going to shell out 4 mil for a “temporary” cathedral then surely the church with all it’s wealth could be coughing up this money. I know, why not ask Bishop Tamaki if he might want to make a sizeable donation, after all, he has bucket loads of money and worships the same god. Doesn’t he? Utterly ridiculous idea.”

Claire : “$4million … All I can say is I agree with what I’ve read, I’m shocked this was even thought of! Ok, sure in a year or two build it – but not out of cardboard! Right now our economy isn’t that flash and there are people suffering so please help them! And there isn’t a city centre for this thing to be built yet? It just makes no sense, people are acting mad that’s for sure.”

Antipodean Futures : “Is Aotearoa about to become the land of the plastic waka and the long white cardboard cathedral?”

James : “Spending $4 Mill on a possible temporary cathedral….Made from Cardboard? Lol………One has to ask….Are you for god damn real? Im sure the 30,000 people with not fixed abode will be stoked. I made a play house out of cardboard ,when I was like 5.. Didnt fear to well when it rained..Lol”

….these comments are all sadly so typical. Some more understanding / inspired comments after the next image:

Blake : “This is great – a world class architect, with world class ambition that Christchurch desperately needs. “You need to build a new Christchurch, not just bring back the previous one” about sums it up. Anyone who thinks $50,000 is excessive for a feasibility study has no idea what a feasibility study is. Just build it and see how great a bit of out-of-the-box thinking can be…”

John : “I hope one eye Cantabrians can open the other with this wonderful solution. Shigeru is a master in his field of architecture and has helped so many troubled regions of the world with his emergency structures. This would be an Iconic deign in itself, and I too would love to visit this cathedral when I am in Christchurch. It does sound unfeasible to have a building made in Cardboard, but have a look at his past projects, to see what a genius he really is. He does combine it with other more permanent materials. The Issey Miyake project he did was stunning! Its money well spent. It will also be a tranquil place to be . Christchurch is very privileged to have such a prestigious world renowned architect to offer such a beautiful design.New Zealander David Trubridge has a similar aesthetic, and could privide the New Zealand imput, and well as local artists. But keep it simple, to keep the costs down.Sigeru is the master of simplicity and minimalism. I would not be surprised if it was not relocatable once it is finished with. I can see why on the surface it sounds ludicrous, but once you understand what we are dealing with here, I’m sure the majority will be please. Just think of how Wellington missed out on a Frank Gehry Te Papa, and what we got was the dross you now see. Embrace it, it would cost a lot more just for the foundations of the new one, and it may not be completes until the mid 2020’s if your lucky.Then you will have something else to be proud of, and the soul of the city will be intact.”

I’ll leave you with a few pictures of his work, so that you can make up your own minds – and any passing Cantabrians to this site can perhaps get to grips with how good a simple structural cardboard tube can truly be:

….and saving the really lovely one for last: his space he created for Issey Miyake – with a beauty and simplicity so suited to the Japanese fashion guru: