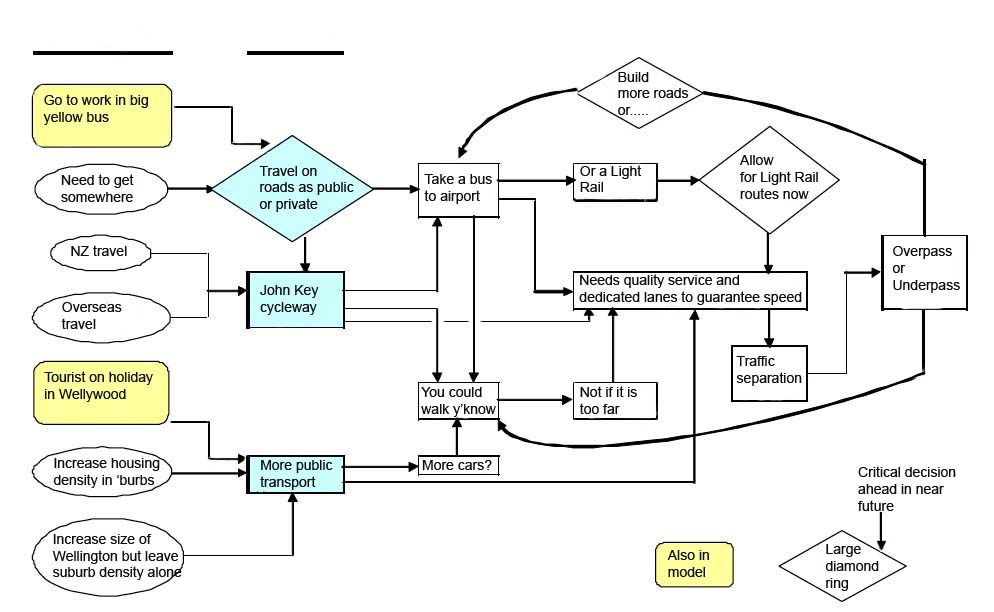 Having waited for over 2 years for the NZTA’s announcement of the Basin Overpass, it was good to see the scheme given some decent coverage in the DomPost the other weekend. Finally we got to see some graphics on what it may look like – although seeing as this is more or less exactly the same as what was intimated 2 or 3 years ago, you have to wonder what the hell they’ve been doing in the mean time.

It is all part of the Roads of National Significance, otherwise known as the RoNS. That’s such an awkward name, and seeing as Transit (sorry, NZTA) gave us just two options that we’ve seen before – and because this ‘consultation’ all seems so laughable, that I think I shall just refer to those particular options as the Two Ronnies. SO today I thought it might be worth looking at what is behind their costings – how does all this roading get costed? So – from the NZTA archives – here is the bit where they justify the cost of the Ronnies:

Limitations of CGE modelling of roading investment
“The most significant limitation is the quality of the roading project data that is fed into the GE model. The main inputs are nothing other than a subset of the output of traditional partial equilibrium cost-benefit analysis â€“ reductions in work-related travel time, lower vehicle operating costs and reductions in accident-related expenditure. Any error in these estimates will translate directly into comparable error margins on the GE results.

Another limitation is that non-market costs and benefits are not captured in GE models. For example, GE models do not generally capture the value of pain and suffering associated with accident trauma, nor the value of savings in travel time where the travel is related to leisure activities….

Travel for commuting is also excluded in our analysis as it is assumed that savings in commuting time would be taken as additional leisure, rather than as more working hours. If this assumption is considered unreasonable it is a straightforward matter to simulate the situation where some or all commuting time substitutes for work time.

Unless information is provided to the contrary â€“ information which does not usually feature in roading cost-benefit analysis â€“ it is assumed that savings in (work) travel time are allocated to industries on the basis of their direct use of petrol and diesel for transport. Firms that do not operate their own vehicle fleet obtain their benefit indirectly through the effects on commercial transport industries. The same procedure applies to vehicle operating costs and legal costs associated with accidents, except that households are also included.

Clearly then the user mix of benefits should be seen as approximate, albeit no more approximate than what is implicit in the usual cost-benefit analysis. In this sense a GE model cannot add empirical content. For most projects this limitation probably has second order effects, but for projects that (are targeted to) benefit particular industries it may be worthwhile to test the robustness of results to alternative assumptions about the incidence of benefits across road users.”

You’ve got all that? In case you missed the salient points: the costing relates only to roads insofar as they relate to work – any savings in time of commuters getting to work are counted, but any savings in time of people getting to weekend footie are ignored. Seeing as people generally tend to go to work in the morning, and go home again in the evening, that means that day time users are predominantly only trucks, vans, taxis, and couriers. Mums taking babies to creche don’t enter into the arguments. Although these marvelous cash-flow diagrams seem to have it all sorted, my feeling is that it shows its all pretty nebulous. So I’ve done my own version (above) where I look at another way of figuring out these costs.

Anyway – back to the analysis! The Summary Report in their Conclusion notes that :

ii. WEBs have also been identified and quantified at both a regional level and a national level, broadly consistent with the use of WEBs in program evaluation in other countries;

iii. These WEBs are generated by the RoNS program beyond those estimated through conventional economic assessment, and are of relatively considerable scale;

v. Estimates of regional WEBs and of national economic and productivity benefits indicate that the potential exists for further additional benefits to the economy generated by the RoNS over and above conventional transport economic benefits;

vi. There is not a materially significant difference between the outcomes of implementing the RoNS under an aspirational versus compliant timetable â€“ the inclusion of WEBs does not change this outcome;

vii. Notwithstanding this, the results indicate that the total benefits remain larger than total costs for the RoNS portfolio as a whole, whether delivered as an aspirational program or a compliant program;

viii. The results indicate that there is no major difference in economic outcome in substantially delivering the RoNS within a ten year timeframe (an aspirational scenario) compared to a longer delivery timeframe. Indeed if funds are available to invest sooner, economic benefits generated by the RoNS, both conventional and wider, can be realised sooner.

Now, I’m presuming that a WEB is not something made by a spider, nor SpiderMan, but instead is probably a Wider Economic Benefit. And before I bore you (and myself) to tears over this, I’d say that the whole point of that excerpt was to highlight that (point iv.) the BCR (that’s the Benefit / Cost Ratio) needs to be 1.8 for a project to make economic sense.

As you’ve probably all gathered, the BCR on this project is nowhere near 1.8 and in fact is apparently a lot less than 1 ie there is no economic benefit for doing this work at all. However, given that (as noted above) all the benefits for people not driving trucks or taxis are not taken into account, then actually it shows that perhaps all the cost rationale on this project is based on completely irrelevant information?