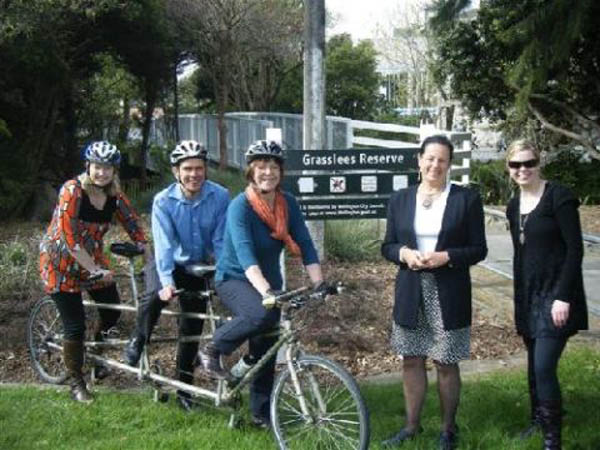 Councilor Andy Foster writes:
“A recent article asked â€˜why isnâ€™t there more evidence of progress for cycling under a green mayorâ€™ ? Questions were also asked about how this all fits with transport overall.

(Note: Photos sourced by Maximus, unless Clr Foster wants to send in alternatives…)
So letâ€™s start with cycling. As WCC Transport Leader from 2007-09 I led development of the Cityâ€™s first ever Walking and Cycling Policies, both adopted in November 2008. At the time the budget for cycling was a paltry $70,000. At the following (June 2009) I was successful in getting a 9-6 vote to support lifting the budget for the â€˜basicsâ€™ (cycle racks, cycle friendly grates, advanced stop boxes, lane markings etc) to $225,000, and putting in funding to develop a strategic cycle network. That is now $1 million per annum. Importantly in both instances this included NZTAâ€™s 53% contribution. That is the same as for local roading.

However the first challenge was getting that NZTA funding support. In November 2008 we had just had a change of Government. Labour had said that if a project was in a Council’s properly developed and consulted on Cycling or Walking Policy then it would get funding support. National abruptly changed the rules completely, focusing very heavily on â€˜Roads of National Significanceâ€™. Fully 40% of spending on transport (all modes, all roads, safety, policing, planning) over the next decade is intended by Government to be on RONS which collectively represent about 0.5% of the national network. Most other aspects of transport suffered and are going to continue to suffer, both in terms of the amount of money allocated in the Governmentâ€™s Policy Statement, and also in how hard it is proving to access what funding there is. RONS projects basically automatically get funding because they are considered to have â€˜high strategic fitâ€™, regardless of whether the transport case is good, bad or indifferent.

Tawa Cycleway/Walkway
However we eventually got the money required to spend what is $1.3 million a year on cycling. The strategic project that was ready to go was the $4 million, 5 km, Tawa â€“ Porirua cycleway/walkway. Thatâ€™s what NZTA agreed to fund, and that is what we are now well advanced in delivering. It will be finished in the next financial year (2013/14). The problem is that for most people they probably wonâ€™t see that because most of us donâ€™t live in or cycle through Tawa/Porirua, and therefore they naturally wonder what Council is doing. Ideally what we should have done is to advance two projects simultaneously albeit slower and that is probably our mistake.

Other Initiatives
What else is happening ? Weâ€™ve been installing about 30 advanced stop boxes a year at traffic lights, cycle friendly grates (to stop your wheels getting stuck if forced too close to the kerb), and cycle racks. The Mayor has been strongly advocating for the Great Harbour Way â€“ a 70km walkway/cycleway from Pencarrow Head right round the harbour to finish at Owhiro Bay on our South Coast. WCC has closed the â€˜gapâ€™ Balaena Bay, Hutt City has been doing some good work on the Eastbourne bays route.

The whole region has decided that the big gap between Petone and Ngauranga is the #2 priority for the next three years, and NZTA is working to a timetable to deliver this project in 2014-15, though I am nervous that they seem to be looking for reasons not to fund it. (apparently most road cyclists wouldnâ€™t use a path if it was slower- we have suggested looking at the many potential cyclists, and walkers/runners who would use a safe route if one existed – the State Highway being just too dangerous) It doesnâ€™t help that NZTA doesnâ€™t acknowledge recreational road use which is obviously growing dramatically.

We have asked the Port about land to get the Great Harbour Way along Aotea Quay, which is also proving a challenge. If built that would link up with the improved shared walkway/cycleway along Waterloo Quay to the cruise ship terminal finished last year.

Celia and I have supported a regional tourism cycleway which Positively Wellington Tourism is now championing with the Hutt and Wairarapa Councils. We are quietly hopeful of an announcement soon that the route using the Hutt River Trail, Rimutaka Incline and Western Lake Road will be approved.

At the second time of trying we put in a morning peak clearway on Thorndon Quay to address one of cyclists’ most dangerous â€“ high crash rate areas in the city. (it is especially a morning peak issue).

Celia and I pushed officers to allow a trial cycle route up through the Botanic Gardens (Met Office to Cable Car) which has a grunty approach but is a safe route up to the Western Suburbs. My experience is it is working very well. We also approved uphill cycling on the Birdwood St footpath into Karori, again for safety reasons. There is now signage on bus lanes (not bus only lanes please note), showing clearly that cyclists are allowed to use them. We have approved speed limit reductions through a number of suburban centres, and importantly along Oriental Parade and round the Miramar headland. Simple green paint on the Hutt Road shared path has been helpful in reducing the hazard caused by motorists crossing the path to enter business premises â€“ altering them to the potential for cyclists to be there.

In Johnsonville, the then ward councillors (Ngaire Best, Hayley Wain, Helene Ritchie) and I specifically got a paper to our Strategy and Policy Committee to better address walking and cycling issues as part of roading plans for the Johnsonville triangle associated with the planned Mall redevelopment. There have been recent improvements at Houghton Bay as part of roading changes. We should also not forget the ongoing fabulous work being done in developing off road tracks, mostly by mountain bikers, with Council support. Some of those are also excellent ways when time permits to get to and from work in a fun way and with a bit more exercise than a direct road route, as I will do going in to Council this afternoon.

Future plans
We have funded investigatory work on a new cycle route from Island Bay to the Central City. That is intended to be our next city strategic route (beginning 2014-15) after Tawa is completed.

We are also looking at the sections of the Great Harbour Way from Ngauranga into the City.

Further out there will need to be some thinking about the northern approach to the city along Middleton Road from where the Tawa shared path will finish.

Future opportunities on the Hutt Road are intimately linked to NZTA plans to add a lane to the Motoway from Ngauranga to the Aotea offramp.

Adelaide Road was mentioned by one blogger, and I agree. We have yet to make any decisions on road space allocation, but in my view safety for people travelling on the road has to rate more highly than on road parking, especially as most of those properties already have off road space.

We have also last week confirmed our desire to have officers consult on lower speed limits (30 or 40 km) across the CBD area which is helpful for walkers and cyclists.

Iâ€™ve also had unanimous council support for officers to work with key stakeholders to audit all those pedestrian crossing times that were also mentioned in dispatches.

So, I understand peopleâ€™s concern about the visibility of any changes. Yes we probably should have spread the Tawa project over a longer period to allow another project to get underway that a larger proportion of the city would have seen, but Tawa is nonetheless a very good project and we will move to other major projects shortly.

It is important that we invest in all modes and that absolutely includes cycling. Wellington does not yet have an adequate, safe cycling network, and our topography and narrow streets make it challenging to deliver one. However cycling is growing rapidly in popularity, and it is really important that the City continues to deliver a better network. I think that has the potential to be quite transformative.

In all this we are keen to continue to work with cyclists, pedestrians and representative groups like Cycle Action Network (CAN), Cycle Aware Wellington (CAW) and living Streets Aoteoroa (LSA). We will also need to continue to stress to Government and to NZTA how important we see this investment.

I hope this gives a bit of context for what is happening, what we plan to do, and the (difficult) environment in which we operate.