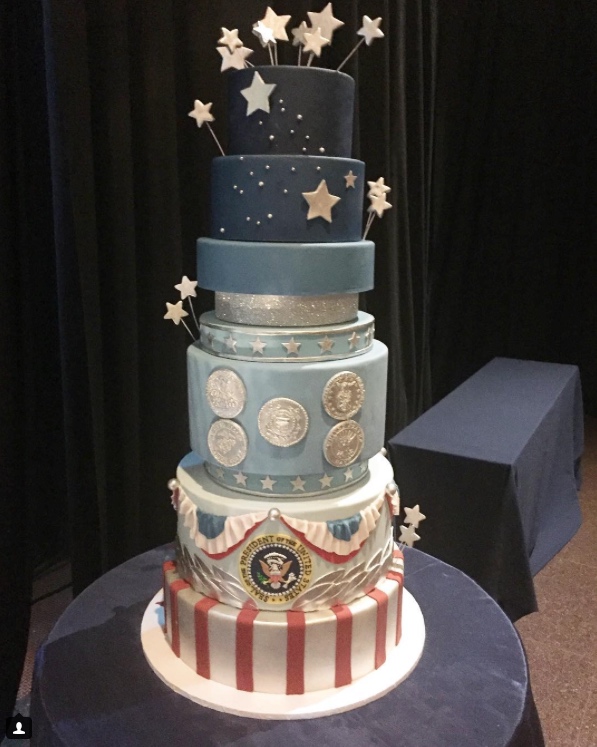 Talking about integrity as a President brings up another issue – integrity of Design and acknowledgement of ownership.

The new President’s team commissioned a cake that was EXACTLY the same appearance as one made for Obama 4 years earlier. No acknowledgement to the original baker, or icer, or cake designer, and not just similar, but a direct copy, according to Stuff in this article from the Washington Post.
“They came to us a couple of weeks ago, which is pretty last minute, and said, ‘We have a photo that we would like to replicate,'” MacIsaac told The Washington Post by phone. Her bakery tried to encourage the client to use the photo as “inspiration,” as they do with many others, she said.
“They said, ‘Nope, they want this exact cake. It’s perfect.’ And we said, great,” MacIsaac said.”

There’s been some extensive discussion on Stuff and no doubt on the twitter-mill overseas, where the lunatics hang out. Comments like:
Yondercall: “The criticism is getting pretty petty. Next everyone will be criticizing his choice of toothpaste. At the end of the day Donald doesn’t care what you say and is just getting on with being President..”
Battle: “When are the liberals going to stop wildly veering between crying and mocking and actually get on with life. It’s democracy people, not a high-school “prom”.”

But the point that I think they are missing is that the original cake for Obama was by pastry chef Duff Goldman, a cake specialist, who said:
“The five-foot-tall, 50-pound cake was meant to pay special homage to the nation’s armed forces, with seals of the five branches military. The different tiers would each be of different flavors, from red velvet to pumpkin-chocolate chip.”

Mmmm, tasty! Clever! Diversity! Innovative!
the new creation, by Tiffany MacIsaac, is:
“MacIsaac said the attention caught her by surprise partly because, per the order, the Trump cake was intended to be more of a prop: All but a three-inch slice at the bottom was inedible.
“It’s just a Styrofoam cake. It’s not for eating,” she said. “I wasn’t expecting it to be seen on TV.”

To me this is not a story about Cake, but about lack of respect, and an attitude where appearance is valued over actual substance. Remind you of anyone?