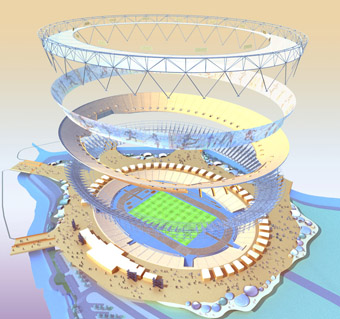 Following swiftly on from the news that Wellington Waterfront is even thinking of demolishing the existing stadium, comes the question: If not there, then where?

Its clear that the current site can’t cope with much more expansion, given that it is quite a large building already, and I can’t see anyone being particularly happy at the big shed getting even bigger or shedier. Although the DomPost reported that that was being considered, it is not really an answer. They might be able to go from a capacity of say, 3000, to say, 4000: but what they really need is to get to a capacity of 8000 or 10,000. That is way more than can ever be installed on that site. Vector Arena in Auckland – although strangely misshapen – can take up to (I think) about 17,000.

I’m presuming that other sites may be being considered. It is a pity that the new Indoor Sports Stadium is being built in Kilbirnie, as that would have been big enough, but the Kilbirnie Stadium report made it clear that the sports folk didn’t want to share their building on odd evenings with rockers etc – as this would have stopped their netball for a night. What that does mean is that the possibility of an events only stadium in the inner city could be a possibility.

So, sites that may be possible must include:
The Stadium forecourt – up on stilts above Fran Wilde Walk.
The Centreport log farm – really, do we need to have our low value exports stored on prime waterfront land?
The Carparks under the Motorway – I know there is a lot of space there, but is it enough?

Where else? Any other suggestions?