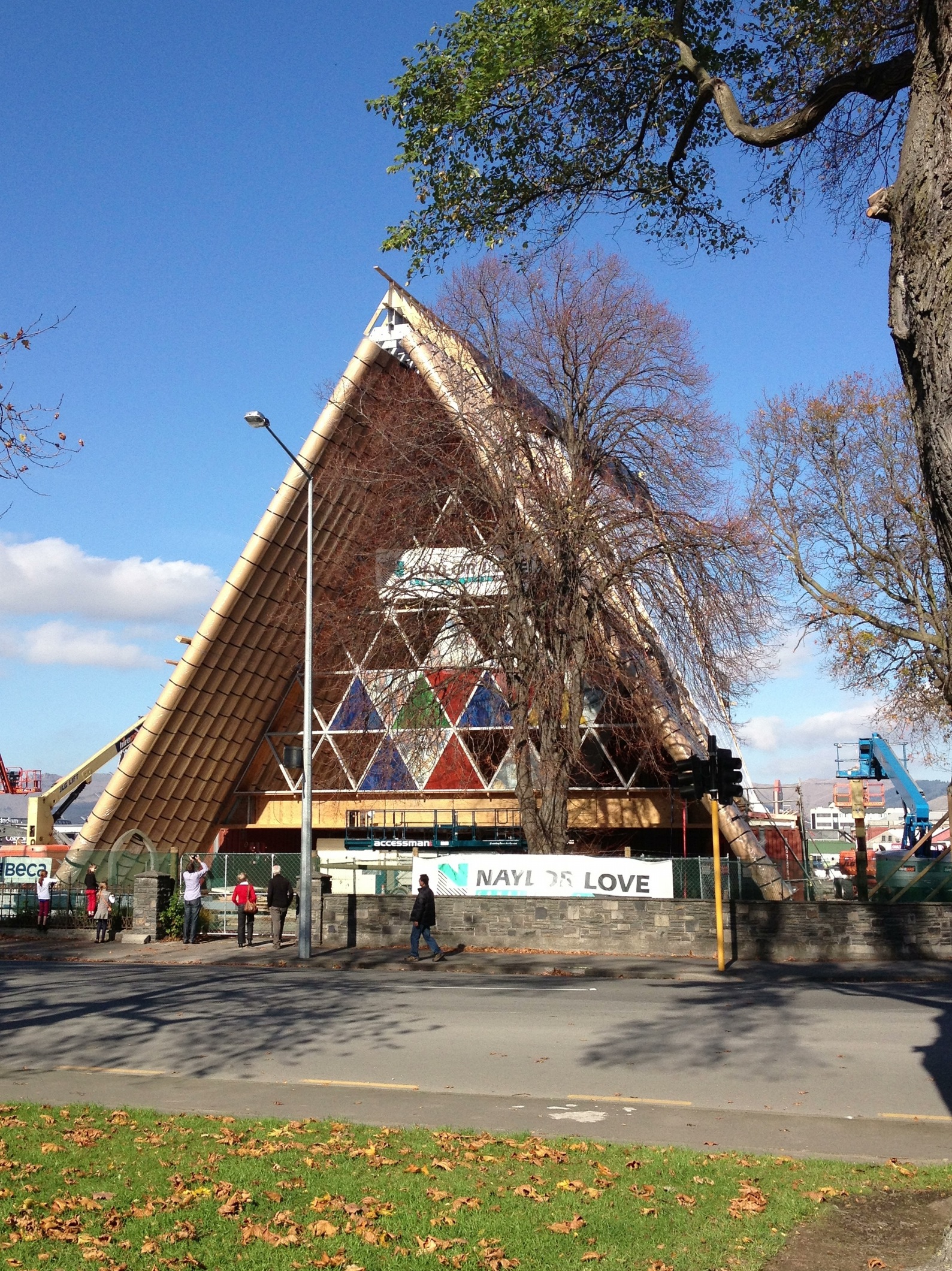 I’ve done a quick google review and I believe what you are about to read is a true EYE OF THE FISH EXCLUSIVE!

This week I’ve had the opportunity to go on site and look inside Shigerua Ban’s Transitional (Cardboard) Cathedral here in Christchurch, and I have to say what I’m writing weighs heavily on my architectural conscious.

Since moving to Christchurch I have encountered a public that is passionately ignorant about design, architecture, and urbanism. Â I have never encountered such a vile attitude towards contemporary design, or creative thinking as I have here. Â Now, that’s a broad brush, and it’s certainly not reflective of the entire community, one only has to look at grass roots work of people like gap filler to see that there are people who care, it’s just that the ones who don’t are incredibly vocal. Â And to that vocal group the Transitional Cathedral represents everything is wrong. Â Their ignorance focused on the use of cardboard, that it would melt in the rain, that it would fall over in the wind, whatever misinformed nonsense you could imagine, they were peddling it. Â When engaging these people it was as if they were actively engaging in knowing as little as possible, about the project. Â I actually got in to a quite heated discussion about a year ago that went more or less like:

Local: “That cardboard cathedral is stupid. Â How’s cardboard even going to stand up?”

Me: Â “Well, shigeru ban has done these structures before and the cardboard in those structures is about 20mm thick and is quite strong. Â However in this case there are primary structural beam inside the tubes”

Local: “And how rich is this architect getting doing this stupid building?”

Me: Â “He’s donated his time and is receiving no compensation for the design”

Local: Â “It looks dumb and no one is going to want to come to it.

Me: Â “Actually it’s already being featured on international websites and people are wanting to travel to just see the building.

Local: “Well, it’s a stupid waste of tax payers money that could have gone to helping people’s houses”

Me: “You know it’s not being paid for by the taxpapyers right?, and that for people’s houses comes from a completely different pool of money than this project. Â It’s effectively private money financing it”

Local: Â “Well, I just do think they should be building it.”

Me: Â  “Oh, so you don’t think private groups should be able to spend their own funds to build what they want to do?”

So in light of a this ignorant and antagonist landscape, I watched the construction of the cathedral with a close eye. Â Located only a few blocks from my house I would walk by and take photos as the building took shame, hoping that it would prove all the critics wrong and come to symbolise the new progressive design and creative thinking that could take hold in Christchurch. Â So it pains me to report that it is a deeply flawed project.

So for those of you who don’t recall, the original illustration was quite beautiful. Â Large cardboard tubes creates a roof for a temporary space.

I think from a pure recreation of the original idea, you can see the final project is pretty faithful to the original. Â And there are some very fine qualities to the space that provide some delight.

One enters the space under the coloured infill glass (I hesitate to use the term stained glass, as it certainly appears to be some kind of image applied to glass or acrylic), through a short vestibule space. Â Once inside there is a quite nice volume of space with the cardboard ribs and other slots proving some lovely lighting effects.

Now, clearly the building is not completed. Â It is currently due to be opened in August, however I think enough of the building is in place that you can get a strong feeling for where the building succeeds and fails. Â For those unaware, Shigeru Ban did not do the documentation and site works, but the project was taken over by a host of local consultancies, led by christchurch old boys Warren and Mahoney. Â I do not know of any details of the working relationship between Ban and WAM, and indeed there could have been much butting of heads of design detailing and material selection, however I have to say if I was an international star architect looking to pair with a NZ firm to complete the project, this building would give me worry.

One of the problems of the building which is shared both by Ban and WAM is a poor response to the site. Â While the entry to the building on the north face, looking into Latimer square is nice, it seems to ignore the reality of car. Â The cathedral is sited on the corner of Hereford and Madras Streets, and is part of the one way city loop. Â Cars drive north bound on Madras and speed around the corner of Latimer Square when moving north.

This identifies two problems of the building. Â The facade which has the most care and detail can only be appreciated by the pedestrian. Â For those in their cars (and this is christchurch) it is the backside of the cathedral which is most prominent (and problematic). Â Additionally, the building is meant for the public to pour out of the space however the site provides little space for the 100’s to congregate. Â This wouldn’t be a problem if the street separating the site from Latimer square was a pedestrianised street, but the street is effectively used as an inner city motor way.

Now about that problematic rear facade. Â For those travelling on Madras (remember, one-way, northbound only), this is the experience.

And this is where I really have to say…REALLY?! Â WHAT THE FUCK?!

The louvers were apparently required as in the summer the polycarbonate cladding creates an absolute oven so some natural ventilation is required. Â But is that the best that could be done?! Â Absolutely shocking. The whole facade is pretty agricultural and disappointing but those louvers are a downright abomination.

This starts to point to the real failure in design detailing in the building. Â While there are some success, such as the exposed steel plate/pin connections supporting the cardboard/LVL members. (This photo is from several months ago compared Â to the one on the right taken two days ago)

Â there is also this.Â

Â  Now, this isn’t hidden away, but is right near the entry. One can hope that there is still some level of finishing required here, but take note of the plastic blocks that attach the polycarbonate. Â These are on view in multiple locations.

So there is definitely some problem detailing here, which really let’s down the project. Â However the worst are the tubes.

So fundamental to the project, that the building took on the material’s name, the cardboard tubes are really a let down. Â During the design process it was discovered that no cardboard tubes could be sourced in NZ with a thick enough wall to provide the level of structural support and fire safety required. Â It was at this point that they decided to utilise an LVL system and encase these in the cardboard tubes. Â Unfortunately during our recent rains, some water got in and heavily damaged the cardboard. Â

While were on site, these damaged sections were being cut out and patched, laying the true structural system bare.

There are some fine bits of LVL in those tubes, and in watching the workers bandage up the cardboard, I could help but think of the adage about the chinese having a word that means “crisis and opportunity”. Â My feeling is that the cardboard tubes actually undermine what is an interesting structure and the rain damage was an opportunity to correct a bad design decision. Â The qualities of the space, the beautiful patterns of light, the materiality, would not suffer, and some integrity would have been restored.

Unfortunately I was not the only one who felt this way. Â Out of our large group of design professionals there was a strong sense of disappointment in the realisation of a beautiful design concept. Â And while I once viewed the cathedral as the symbol of the potential of strong creativity and design in the city, I now look at it in the context of building consenting woes, insurance problems, and other scandals and wonder whether it is an omen for christchurch. Â Missed opportunities, ham fisted and bungled solutions, lack of contingency thinking. Â It is a worry.

below, more photos from the construction process.