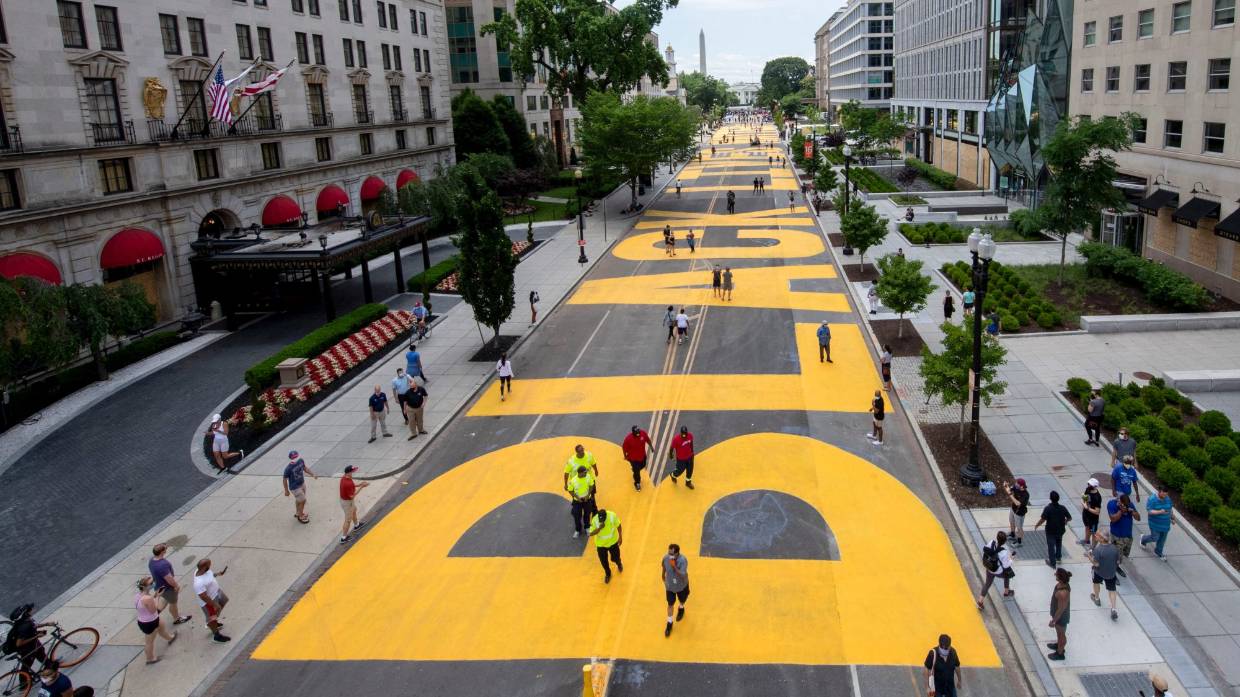 As a blog dedicated to commenting on Architecture and Urban Design in Wellington, you could argue that I should have no reason to make any comment on the disruptions in America caused by the death of George Floyd. You could, but you’d be wrong – it’s my blog and I’ll write what I like, about what I feel. The Eye of the Fish looks in many places, not just towards Whanganui-a-Tara.

I think we’d be hard pressed to find anyone in the world who wasn’t shocked, outraged and deeply saddened by the blatant murder of Mr Floyd by someone who is meant to be a protector of the people. “Protect and Serve” it says on most police badges, and while we are not yet quite in a state of Robocoppedness, it clearly doesn’t say the Verhovenesque mantra of OCP’s “Whatever it takes”. Yet this is what it has. The USA has an extraordinary array of armed forces, and is in effect one giant military machine – to an extent completely unknown here in little-old-noo-zealun. There are wave upon wave of armed officers – not just the Police, but also Sherifs, Marshalls, National Guard, Coast Guard, ICE (Immigration and Customs Enforcers), TFA (Tobacco and FireArms), FBI (You know that one), CIA (and that too), NCIS (sorry, that one’s made up) as well as the National Guard, the Army, the Navy, the Air Force, the Marines, and now the Space Force. And Secret Service. There’s probably more – almost definitely more – but I haven’t got the time to count them. There is also the local residents – the American Constitution holds that the People have the right to bear arms as part of a militia, should the States ever go rogue. Arguably, that time is now. Ironically, just one force is strictly forbidden of waging war against the civil population – the Military. And that’s the one that old dumb-ass himself tried to mobilise against the people…

NZ, by comparison, has just the Police and the Defence Force who carry weapons – our Fisheries officers are only allowed to carry a large mackerel as a weapon, and our DoC rangers may only slap you with a wet podocarp leaf or a pre-deceased possum, rather than pull out a gun and get all medieval on yo ass. Our secret state spy agency is only allowed a briefcase with a copy of Penthouse and a pie. Even our Police do not yet routinely carry weapons (South Auckland excepted, sorry to say) and our Defence Force is largely for show – we can’t afford live firing at sea (shells costing thousands each) nor on land (I believe those playing at war in Waiuru are authorised to say “Bang” loudly). We don’t know how lucky we are.

George Floyd was an innocent man who did not deserve to die and the man who murdered him does deserve to be locked up immediately – although a public execution of the police officer concerned would probably be a worthwhile exercise in bringing home to the Police Force that this shit is serious. Yes, policing is an ugly task, but it strikes me that the best thing NZ could do is to offer to go over there and teach the USA Police how to actually be a police force. God only knows we’re not a perfect force and that many of our cops are no doubt as racist as anything as well, but even so, a five year old at first week of school can tell you that you should not just kill someone for no reason. America’s police force is – on the face of it – badly in need of some basic training. First – do no harm. Second – protect and serve. Third – keep the peace. Certainly not: Kill anyone with a black skin, just because you feel like it.

As we all know (well, with the possible unfathomable exception of the Fox-News-watching racist kiwi in the paper in the weekend), America is ruled by an idiot, with a compulsion to lie all the time, a narcissist and sociopath who is destroying the country that once held some respect in the world. Now we just feel pity. Time for him to go, by force if necessary. America deserves a better president. The world deserves a breathing space from his toxicity.