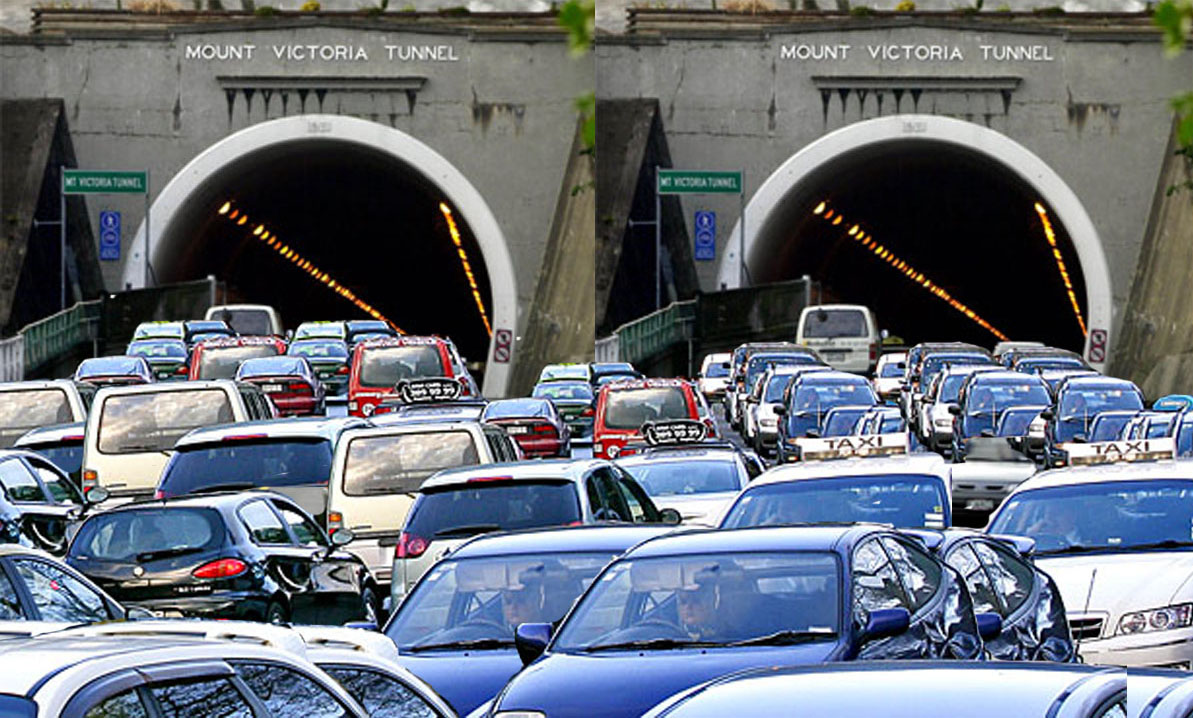 To Tunnel? or Not Two Tunnel?

That IS the question alright, being asked all over Wellington as we near the time for an election. This year, Council elections appear to be up in the air – in a big way. We have a wide range of candidates for all Councils, and really, it is hard to know who to vote for. How to make your mind up? And Why does it matter? Let’s have a look at that list again.

Conor Hill – “For a better Wellington”

Andrew Grantham Cox – “I have strived.. to help the Council with their transport vows.”

Ajay Rathod – “I will be a leader that doesn’t tolerate discrimination.”

Right off the bat, I’m going to dismiss the fringe elements, because, well, fringes are made to be trimmed. So Hausberg, McDonald, Cox, and Rathod go. Bye! Not quite sure why you stand for Mayor if you haven’t even got the nous to put up a website or billboard. That would appear to leave us with a smaller choice of Condie, Lester, Hill, Calvert and Foster. But a choice of five is still too many. Condie is clearly going to appeal to the leftish/youngish vote, with Fudge-coloured hair and an interest in Montessori Schools. Calvert appears to be in the wrong election, as she clearly should be standing for Regional Council instead of local, as she wants to control the buses. Well, I reckon I could sort out America better than Donal Trump too, but not if I stand in the Zimbabwe elections. Choose the right race first Calvert! Widely misguided but will still draw the vote from True Blue supporters. Lester is clearly going to get a lot of repeat custom from people who recognise his name and think he is doing an OK job. I find it interesting to read that he thinks he has lead a “Council that’s getting things done” as it seems the exact opposite to me. Has anything, at all, actually been done? There is a coloured pedestrian crossing in Cuba St, yes, but anything else? Hill is the only candidate I’ve actually met recently, and he seems nice, and normal, and is obviously a decent bloke, but is that enough to win? And Foster… well, there’s a thing. I’ve actually got a huge amount of respect for Foster as he is the only Councillor I know that actually gets things done. Plus, he writes reasonably regularly on news items in places like Scoop – and even occasionally The Eye of the Fish. For that reason alone he is likely to get my vote, but he has stood before and polled appallingly, for reasons unknown to me.

Clearly, therefore, the two likely front runners are going to be Justin Lester due to voting inertia and name recognition, and Diane Calvert due to the blue rinse brigade wanting a National candidate to vote for. Connie and Hill are likely to be dismissed as too left / too “not mainstream” enough, and Foster used to stand under the NZ First banner so he is probably still tainted / bedaubed with that perception, despite being the only candidate who can realistically get any action to happen. Calvert is, to me, a complete idiot for standing in the wrong election – if she had wanted to be in power she could have gone for GWRC and probably shot straight in at number One, as they are clearly rudderless, but she didn’t, and shows no sign of understanding her fundamental mistake. I went to a GWRC meeting the other day, and the Councillors were openly laughing about the idiocy of people at WCC thinking that they would control what is legally in GWRC’s bag. So we are probably still likely to get Lester back in again due to vote splitting and there being no clear single credible alternative.

This election is, like no other, going to be around the issue of Transport, and accordingly, To Tunnel or Not To Tunnel – THAT is the question. The people at Save The Basin Reserve have come out and posted their picks / recommendations for Mayor based on answers to a series of questions about transport – including whether a second Mt Victoria tunnel should be built or not. The somewhat surprising result is that they recommend people choose: Jenny Condie, Norbert Hausberg, Conor Hill, or Justin Lester.

That’s a clearly left-leaning selection, distinctly clear from the clearly right-leaning selection of Calvert, who is pro-roading and tunnelling. Foster, of course, is a transport enthusiast and a keen cyclist, which some clearly think makes him a greenie, but he is also pro-sorting-the-traffic-out in a way that makes him look more like a tunnel man, and to some, right-leaning.

I’m sort of amazed that Save the Basin have come out so strongly against a Tunnel, because they were so much against a Flyover last time, that a tunnel option should surely help resolve traffic, something that they spent a great deal of time and money arguing in court with the sister organisation of Mt Vic Residents Association….

“Little Amsterdam of the South Pacific”