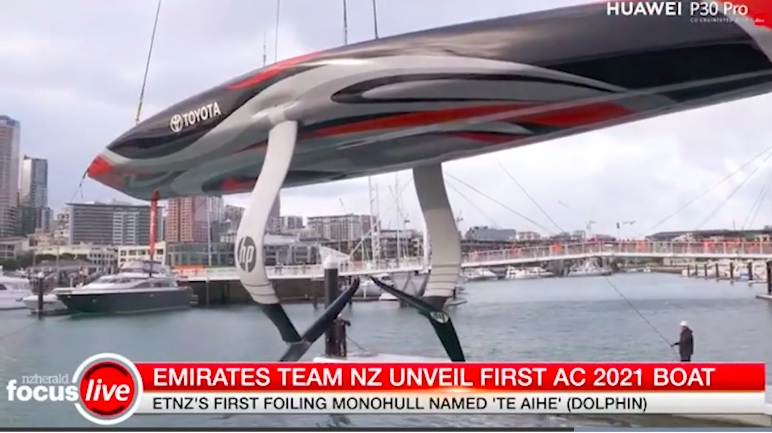 Although normally concerned with matters urban and matters Wellington, occasionally I take a deep dive and end up in the Waitemata. On this occasion a new boat has been launched, on which much of New Zealand’s pride has been locked up in. On TeamNZ winning the America’s Cup last time (we’ve won and lost so many times now that I’m really not sure where we are up to) we – (we? who am I kidding – you and I had nothing to do with it) – specified that the next Cup (e.g., this one, in 2 year’s time!) would be raced with “foiling monohulls”. And here it is, version 1.

Foiling monohulls – so easy to say but so difficult to do. Foiling catamarans were difficult enough – there you had two fixed funky foils: one foil per hull, so as one dipped into the brine, the other rose out of it – but on a monohull, this becomes so much more difficult. A seriously order of magnitude more difficult. In this case, caused because you still have two foils but on each tack, one side needs to lower the foil into the water and the other side needs to be raised clear. That’s much the same as having a car with four wheels, but always driving only with the two on the left, and folding the other two wheels away when not in use. That’s James Bond level shit! Great on paper, great in the movies, but helluva hard to do in real life.

So it has already been tested on smaller boats, apparently, with Dean Barker sailing in “American Magic” a few years back – he used to work for NZ but for way more money by defecting to the dark side.

Seemed to work ok there. Except that it didn’t.

“Team New Zealand have been responsible for the foil cant system, a mechanical movement that takes the arm up and down, and have had positive feedback on that.”

“Luna Rossa were responsible for the foil arm itself and they haven’t stood up to tests for the massive loads involved with these huge boats.”

It is all so much harder as you get bigger. The so-called “foil cant” mechanical system is basically a large hinge that needs to click into one of two fixed positions – up or down – and stay there, completely rigidly, while the boat forces incredibly high amounts of torque through there. With the yachts sailing at 45 knots (90 km/hr) and suspending the entire weight of the enormous yacht – and ginormous mast/sail – on the foil, the stresses on the foil are enormous – and all rest on a single “foil cant” working perfectly every time. I don’t like it’s chances. If anywhere is going to break on this boat, it is going to be this one point – it has the potential to rip itself to pieces – or to stay whole, but rip the boat to pieces instead.

The foils themselves are one thing – beautifully shaped, presumably all carbon-fibre – they’ve evidently moved on from Luna Rossa’s flat T foil, and are now much more flowing like a bird’s outstretched wing. With winglets like Air NZ’s latest planes. And a forward-pointing V like a boy racer from the Hutt with the latest Supra. These carbon-fibre foils will have to support the entire weight of the hull and mast and lift it up out of the water and make everything fly – and fly perfectly straight.

But it is the foil-cant-mechanisation that I am most intrigued about. As far as I understand, everything on the boats needs to be manual – i.e. activated by ropes being pulled. There is presumably no electric motor twitching this flapping bird’s wing hither and yon, and on all good principles of cantilever, there must be a hefty amount of this sticking into the inside, carefully tucked out of view. Somehow, not moved by hydraulic ram, but hauled into place on each tack by 7 hunky great slabs of man-flesh. Toughest job in the world, right there. And held in place, unmoving, while the next tack is sailed with the entire ship held out above the water, at speeds that would run down and kill anyone in their way. This is an extraordinary joint, with extraordinary potential to fail spectacularly.

There’s what appears to be a dimple or crease on the outside above the wing, where evidently something lis attached, of such huge importance that the boat is allowed to interrupt the perfect streamlining and crease the surface with a scar – no small decision, I am sure. And in the middle of that crease, I see what looks like a bolt hole from the outside. Undoubtedly, this bolt hole must be for taking the wing on and off the boat – for replacing the wing when it goes wrong or even possibly for replacing on different wind days? But does the entire fate of the boat then rest on this one, single bolt? How much faith would you put in a building that had one single bolt to hold the entire building up? How much faith do the designers have in this extraordinary design, on which rests the hopes and dreams of a nation, not to mention the continued high property prices of half the entire country?

As King Richard said once (paraphrasing here, a little): “A bolt, a bolt, my Kingdom for a Bolt!” Our kingdom’s futures ride on the bolt holding this joint together. This will be an interesting race to watch.

To Tunnel? or Not Two Tunnel?