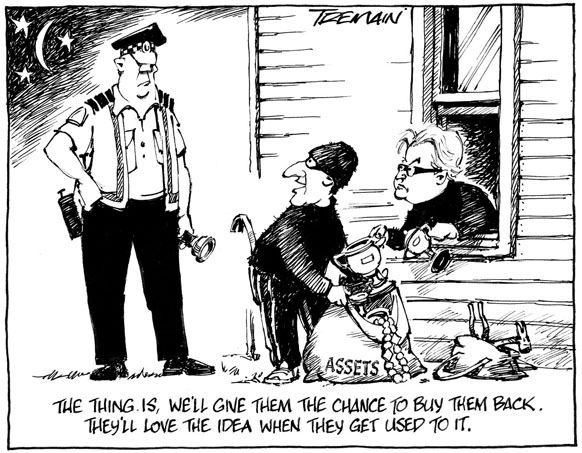 And so the sell-off begins.

Cartoon thanks to Tremain, from a year or two ago – and how apt it is turning out to be. John Key, the used car salesman who could sell a sombrero to a Mexican, and the fellow accolytes of market sell-offs, are starting once again to dismember the corpse of New Zealand. Targets for sell off this time included Mighty River Power (which, seeing as the Tainui people have been given back possession of the river bed of the Waikato, would seem to have a greater claim of ownership to its assets than the Key government..), and Solid Energy. As in, yes, the one that has just gone bankrupt, morally and physically, if not completely financially… Damn. If Key could only have got in early and flicked that one off, then he would have been able to blame the collapse on the new owners. Which would be us…

But how have the sell offs been doing in the past? In the 80s we had just about everything sold off that wasn’t nailed down, and even quite a few that were. Telecom was once New Zealand owned, and I guess that has been a moderate success, although Gattung presided over a massive loss in shareholders funds. Contact Energy has been so-so. Lots of people lost loads of money there as well. KiwiRail of course has been a disaster, run down so much by the former crooked owners that just asset stripped it and then scarpered. So the Government had to buy it back. Air New Zealand as well – a basket case really at one stage, even if it is all happily hobbited and furry friendly these days.

I’m at a loss to understand this Government’s attitude to sell offs. Not only are they going to be missing out on any further revenue stream (assuming that it rains again one day, which we have to presume it will, eventually), but they are selling assets at the worst possible time – who has any money to buy them? Not just people, but countries as well – we’re all broke.

Can someone explain the logic to me?