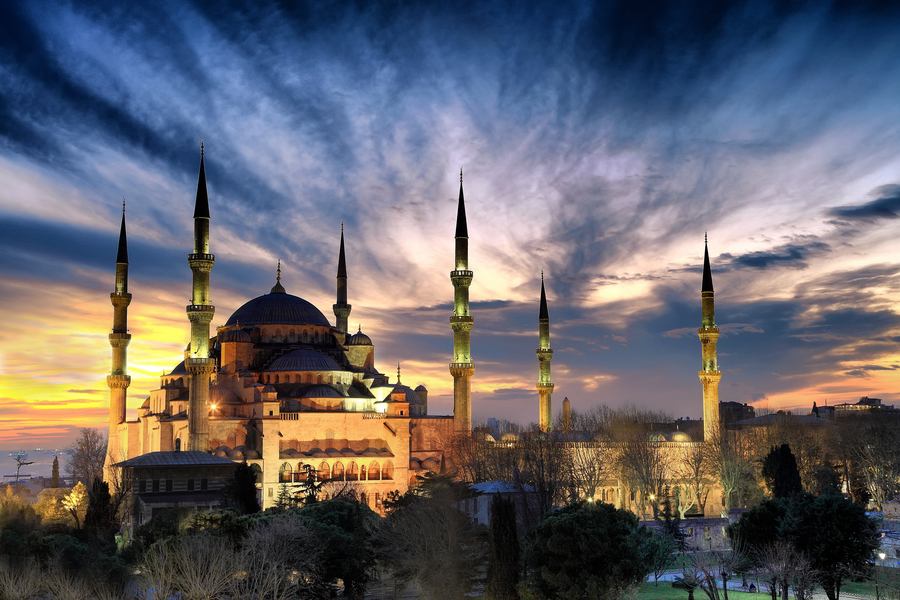 Religious nutters are on the loose. No, I’m not talking about Colin Craig (although did you see that full-page advert in the paper on Monday? That’s one full-blown monster raving loony party right there…). I’m talking about ISIL, the self-proclaimed Islamic State of Iraq and Syria, ISIS, or ISIL, or just the Islamic State, where there has been a notable and disturbing development. Well, everything from that part of the world is fairly disturbing these days, but this even more so. They’re blowing up Mosques now.

I’ve spoken to a few of my Muslim friends, and they all agree: ISIL are extremist religious terrorist fanatics, and should not be allowed to flourish, or continue, but I fear that this particular Islamic cat is out of the muslim bag, and may not be able to be pushed back into the cage they crawled out of. Should an Islamic state truly come to pass, what would it mean for us? For the world? What chances are there for great works of architecture in a new Islamic State?

Well, not much it seems. These are the same sort of extremists that blew up the giant Buddha of Bamiyan, because it was a depiction of a foreign god, despite an age that well exceeded that of their own religion. They have no respect for others religions, and certainly no interest in religious idols. As far as I understand, they’re a branch off the Sunni tree, but even the Sunni don’t like them. Needless to say, they don’t like Shia. And I’m pretty sure that they don’t like Americans, the Western way of life, and probably not that keen on Christians, Jews or Atheists either. Damn, they probably even hate Quakers and the Amish – and no one dislikes the Amish, except for people stuck behind them at the lights.

I’m not entirely sure why they are blowing up Shia mosques, or even more curiously, what they plan to achieve by bulldozing Sunni facilities. It’s like they are just trying really hard to piss absolutely everybody off. Well, they’re succeeding. It’s convoluted, but these are the same guys who are battling Syrian President Bashir – the same guys who until recently at least, we’re getting covert funding from the US and Europe to fight for freedom in Syria. Democracy is a bitch, ain’t it? Be careful what you wish for…. Want Bashir dead and gone? Fight a war. Fund an opposition. Want Saddam Hussein dead and gone? Same thing – and just how well did that turn out now?

Yep, chalk that one up as a real success towards world peace and political stability. Thanks Tony and George!

There’s no way that anyone will be able to win this war with sane and rationale discussion, and the way that modern warfare is going, ‘Murica is just going to send in the drones – which will inevitably just alienate the population further, and radicalism still more impressionable youths.

I’m reminded a little of the last time that Islamic leaders ruled over Europe. The signs of it are still visible in the architecture of Spain and of course in certain parts of the -sorry, Balkans. The Moors were in southern Spain from 709 until 1614! Which is just over 900 years, while Christian armies roamed through France, so we shouldn’t really be that surprised if there is another period of Islamicism in the Western world. The Ottoman Empire lasted from 1299 to 1923, just over 600 years, and spread over large swathes of Europe and the Levant, while the ancient city of Damascus (probably the oldest continuously occupied site of human urban habitation ever) has been an important city since at least a couple of thousand years BC, and was settled possibly up to thirteen thousand years ago. It’s had more religions through it than I’ve had hot dinners, although certainly Islam has had a hold on it for the last 1200 years or so.

I’ve always wanted to go to Damascus, but never got on the road to go there: right now it’s not looking like the most comfortable place to be in.

But much of the rest of the Islamic world has a fine tradition of fantastic architecture. Istanbul has not just the “recent” Islamic architecture of the Blue Mosque and the many minarets that make it such a beautiful sight, but also the Hagia Sophia that started off this whole Dome thing back in 537.

Both of these buildings are incredible works of architecture, one started by Justinian at the time of the schism between the Catholic and the Orthodox churches, the other celebrating peace with the Persians, built in 1616. Fanatical belief in God can indeed produce great architectural beauty – in fact, one could argue that without that fanatical belief, the resulting architecture is nothing. Does the Modern Movement suck at soul-searching architecture because the buildings are worshipping Mammon and Onnan instead of God?

We’re not likely to get any great architecture from the idiots of ISIS, sadly, who despite their renouncing of Western ways, seem quite happy to use the very Western inventions of the Kalashnikov, the bazooka, the Nissan pickup truck and the cellphone, yet rant at the unholiness of the any depiction of Mohammed, anything living, and any worship of any saint. The hypocrisy seems unlimited. While I’m sure that the vast majority of Muslims are against the extremes of ISIL, there is a small radicalising sect that will continue to get converts, and to breed more extremists. As far as I’m concerned, they can all go to hell, if indeed I believed in such a place.

Post-script addendum: True terrorists prefer Toyota, not Nissan.
Ironic post-modern slogans that seem appropriate right now: Toyota’s: “You asked for it – you got it!” and “Toyota – moving forward.”
and Nissan: “Innovation that excites”. But didn’t they used to have one that said: “Power. Shift. Control” ? Now that would be ironic…