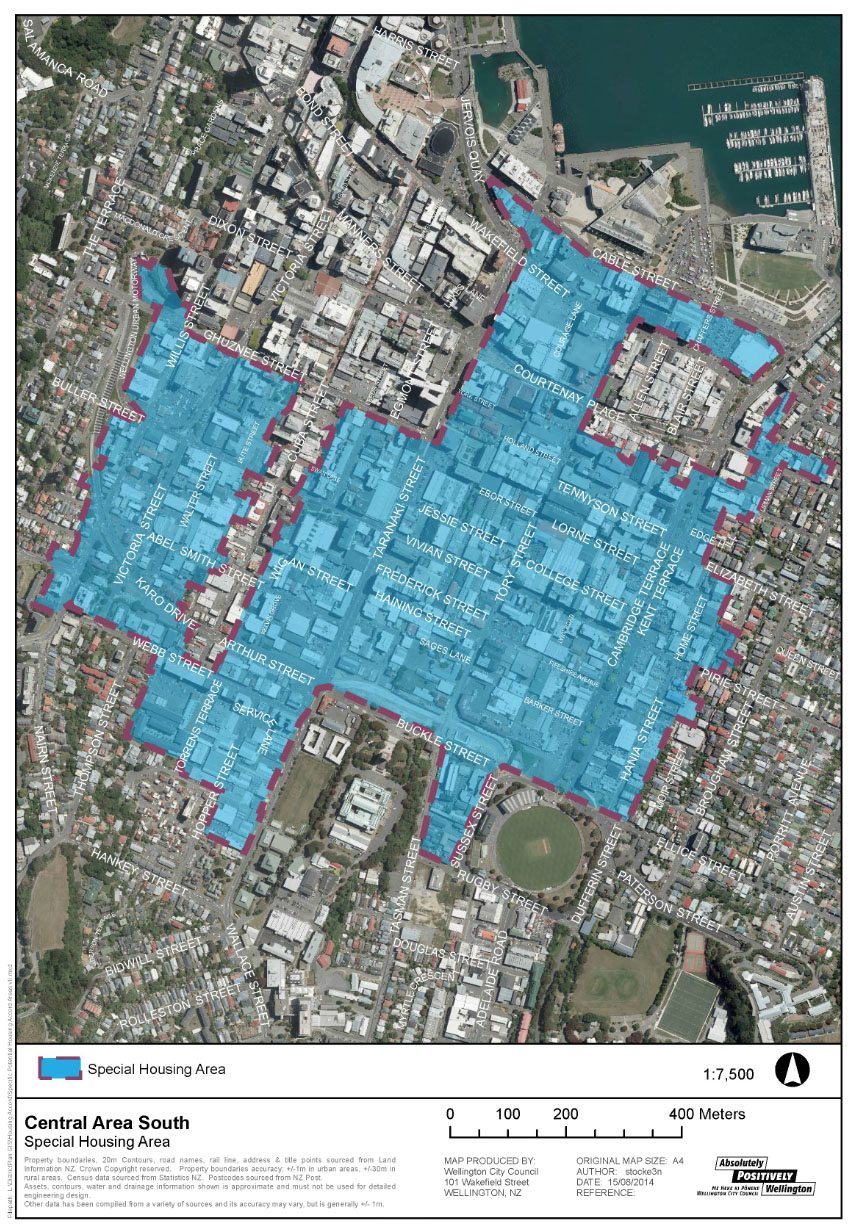 OK – so today we have a look at the remaining sections of the Special Housing Accord areas, based in and around the central part of Wellington. There are, it appears, three remaining areas : the first, and biggest of these, is Te Aro.

Te Aro is, to be perfectly honest, the growing residential heart of Wellington. Once – not so long ago actually – it was home primarily to light industry, with spray painters, panel beaters and dodgy car repairers down every back alley. Now, the cappucin monkeys have moved in (the cappucino-drinking set of bipedal humanoids) and the polished grunge of caffinated service permeates the air. A hogoe of sirreverence, if you will, according to Markman Ellis’s book: the Coffee House – a Cultural History – well worth reading if you’re interested in coffee, as most of us seem to be.

But first, a bit about Te Aro. It carries on from when the first pakeha settlers came to Wellington – not just from England, but moving here from the Hutt. The land that the new settlers moved to was, superficially, much better ground. Not subject to the vagaries of the Hutt River, or the Waiwhetu stream, but Te Aro was not perfect either. Have a read of this account of Te Aro in 1859:

“Mr Plimmer also mentions that Te Aro flat was covered with fern and flax, except that portion of it extending from Courtenay Place to the Basin Reserve, which was one impassable bog.
A friend told the writer that in 1859 he would walk out of the back door of the house in Courtenay Place – walk a few paces, then jump up and down and watch the jelly like movement of the ground for a considerable distance around.”
From the Cyclopedia NZ vol 1, p245

Just imagine – the very site that the writer was describing back then, could be the very site of Boogie Wonderland today. Those same tendencies still exist in Courtenay Place today – walk a few paces, jump up and down, and watch the jelly ripple… But we’re talking about a different seismic event. Nowadays, it’s dance party central, and the ripples are the waves of muscle, flesh, and sub-visceral fat that permeate the bodies of the young groovers who shake their booty on the dance floor. So, there may well be historic reasons why high-rise building has not taken place much on the Te Aro foreshore until today…

“In 1853 Te Aro swamp burst through the narrow bank which separated it from the sea. The bursting caused a loud noise, which was heard from a considerable distance, and covered the town acres in the waterfront.
Te Aro flat was merely flax bushes, fern and streams, where inungas and eels could with very little skill be easily captured, and where cattle that had been pushed overboard in batches from the ships near the waterfront of Bethune and Hunter’s and other places on the beach, sometimes took charge of the town and defied the efforts of the bullock punchers in charge to pen them in the yards provided for them in the vicinity of Manners Street. Numbers got bogged in the swamp, where those that could not be rescued by horsepower were left to perish. In 1855 the earthquake disintegrated the swamp, and small islands of flax and toi-toi were floating about the harbour and interfering with the passage of small coasters in the area. At the same time the whole area was raised.” P304.
From Early Wellington – By Louis E Ward.

Strange to think of Courtenay Place as a swamp full of eels and toi-toi only 150 years ago. We have all heard that Cambridge / Kent Tce was the route of the Waitangi Stream, but it is a bit disconcerting to read that the whole of downtown Te Aro was built on a 150 year old jelly / eel pie. Hmmmmm. Not so tasty after all. Looking at the new Elevate Tower Apartments that have just gone up 17 storeys high on the site of, what was, until recently, a sandy beach near Te Aro Pa, makes me nervous. Have the geo-tech engineers got it right? Have the pilers reached rock-bottom, in a very literal sense of the word? Fingers crossed.

But the relevant thing to note from all this, is that the SHA for this area is vast. For some reason, it misses out the special character areas of Cuba St and Blair/Allen St, but the rest, apparently, is up for grabs. Except the Basin Reserve. And the old Dominion Museum. And… well, as noted previously, the boundaries are a bit odd.

The next area, close by, is the Arlington area.

Now Arlington is a much more feasible area for redevelopment, given that it is largely all social housing at present, some of which has reached the end of its useful life anyway. There is a lot of history in these buildings – built in 3 main phases, from memory, with Council staff involved in the early phases, and a young and hungry Ian Athfield involved in the later phases. Some of them – if not all – have a heritage rating. Some of them – if not all – have a seismic problem. This, to me, is the real heart of the SHA territory. What DO we do with these buildings? Some of them may well be deathtraps. Some may be saveable – others, not so much.

And the final SHA for Wellington is the old chestnut, Adelaide Road.

So much energy has been spent on redesigning Adelaide Road – for at least the last decade, and probably more, it has been an issue in terms of its clash between needs of the traffic corridor it is, and the destination that it wants to be. It’s worthy of further discussion in itself, but before a single further Resource Consent gets granted here, the WCC and the NZTA need to sit down and solve the chronic traffic fuck-ups that exist here. Is it a cycle lane, or is it a bus lane? It can’t be both, safely, at the same time. Do we want parking here, or do we not? Does the street need to be made wider, to hold more cars, or narrower, to encourage more pedestrians? Solve the traffic here first – then, and only then, install the housing.