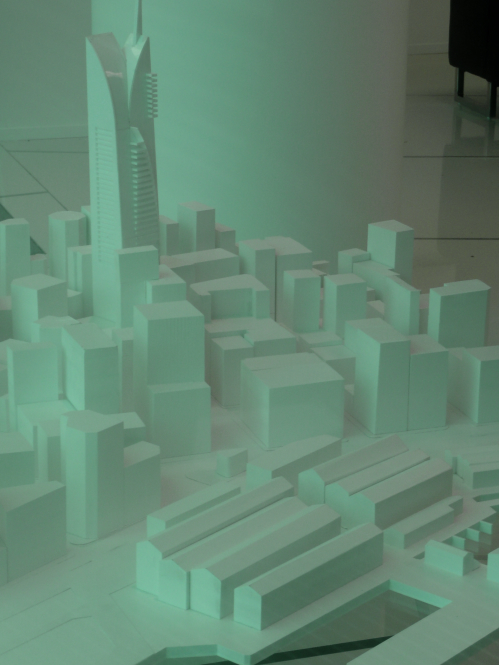 Hooray, the Dominion Post is finally taking an interest in architecture! Well Done to their photographer Kent Blechynden with his page 3 photo, a full frontal spread of the boys from PyraDeck striking the scaffolding on part of the Sodo apartments.

It’s a lovely photo – well composed, full of little colour accents ie the fluoro Hi-Vi vests of the workers, and its really good to see some new buildings in the paper. The only thing it missed out was the noise aspect as well – each of the men had to say Yep in a loud voice when he had grabbed hold of the next scaffolding pole, so the whole building – the whole of that part of Taranaki St was echoing to the sound of 16 Yeps, like a be-bop version of himalayan chanting, or possibly a avant-garde rapper with not much to say (like the Hiphopopatamous, my lyrics are bottomless…). A rare moment when construction captures the eye – the Fish was there too, and other people watching the artistry of the scaffolders – but my photos aren’t as good as Kent’s pic. Although I did snap this one just the other day in Welly.

We have commented on the building before – its ridiculous name, the tiny rooms, but also the sheer geometric precision the building was being assembled with, like a giant Tetris game I thought. I’ve heard some pretty terrible comments about it from people in the street, or apartment dwellers in the town – there seems to be some disbelief at just how ugly it was looking, and the possible design flaws (such as south-facing open deck entry on the Ghuznee St side – brrr, you can tell it has been designed by an Aucklander with absolutely no concept of just how nasty The Southerly can be), but I’ll try and bite my tongue and keep my thoughts to myself till I’ve had a look around inside.

So, in the mean time, feel free to comment on the Sodo, or if you want to tell me if this number is for real – spotted in the window of a prominent Wellington developer….