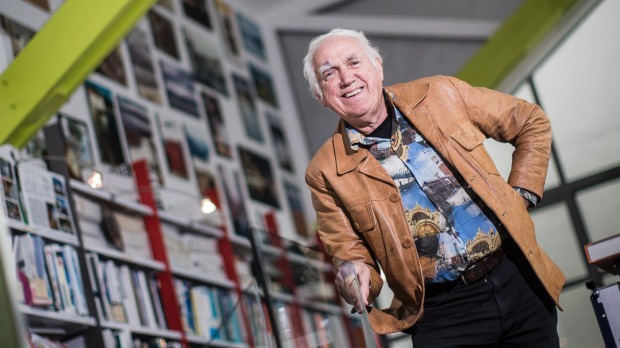 Wonderful to hear that last night Roger Walker received the NZIA Gold Medal for 2016 – well deserved and long overdue. There was quite a nice wee film screened about Roger and his work / life, featuring of course some suitably humorous tales about cars, women, his connection with Ath, and above all, architecture.

Sadly, Ath has gone, but gloriously, we still have Roger, looking exactly the same as he has for the last 50 years as far as I can tell, including the same brown leather jacket. The battered, rugged look worked well for Indiana Jones, and to be be honest, works really well for Rog as well. You just need a hat – and a whip.

In a serendipitous moment of joy, what is probably one of Walker’s best ever houses is for sale at the moment – the Britten House. I’m hoping that they are going to have an open day, for I’d love to have a look around, but in the mean time, here are some photos from Tommy’s real estate where you can buy it if you’ve got the moolah. It’ll cost you a mill, but its worth two at least.

It is a period piece from the 70s, designed for New Zild’s celebrity chef of the time – the most famous person ever to come out of Otane, and in a time way before Masterchef and MKR, Des Britten was THE business. Yes, there was Hudson and Halls later, but Des Britten was the lad about town, the Jamie Oliver of the day, a mean hand with a sharp knife and a pan full of spices. The stories that the house could tell if walls had ears…

And now, oddly, he is a priest. Des, that is, rather than Roger. Somehow I don’t think that Roger would be that keen on the priesthood (apart, perhaps, from the confessional stories and the holy wine…). If anyone was to buy it back, it should be Des (I’m presuming that he is not living there now), but as it looks hardly touched at all by time (i.e. no new interventions since 1974, except for lurid pink and turquoise external paint job – was that you Roger?), this house really is a superb example of well-crafted architecture, custom-designed for the site, the client, the zeitgeist, the sheer, complex, mind-fuckery of the planning. How does he do this stuff? How does anyone virtually visualise a series of inter-connected species climbing up an around a staircase split over 8 levels? I’m impressed. The fevered mind of Roger Walker is a seriously complex 3D machine…

Just in case the house sells and the photos go down, here are some more images from the Britten masterpiece.

If I was in the market (sadly, I’m not) for a new house, I’m not sure I could live with it as it is. Yes, I love a good period piece, but honestly, was the 70s a good period? Is that orange-tiled bench top a thing worth keeping, or something to avoid? Those curtains – perhaps – would have to go, and the pink external colour scheme might have to be tamed, but that is a seriously evocative piece of architecture. Good on you Mr Roger Neville Walker – long may you continue to design and stimulate our senses.