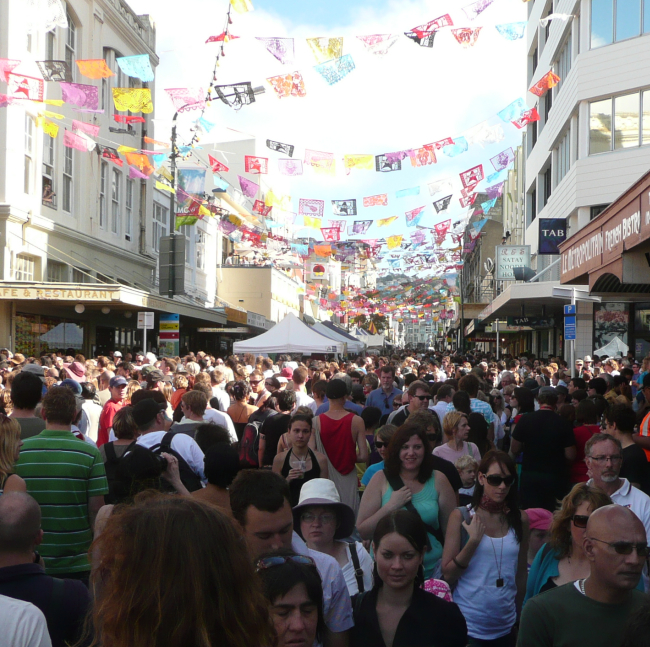 Front page news today that the Cuba Carnival is canned for next year, and that the future of the whole event is in doubt: Oh No, Say It Isn’t So! That sucks – it really does. The Cuba Carnival really is one of the high-lights of living in Wellington – the colours, the parades, the music, the clothes (or lack of), the food, and oh, did I mention the music? We do live here in a fairly staid, primarily anglo-saxon culture, and the introduction of the latin influences adds a zing to the whole city that resonates throughout the year. Please reconsider Kerry !

And all the smaller cultural groups get to play a part!

While I can understand that there is a bit of a hoopla over the Rugby World Cup next year, that is over an event that is not known for creativity, is totally male dominated, and really only relevant for the sports-mad. Personally, I couldn’t give a flying fish toss for the moronic sport of rugby or the mostly moronic supporters – the whole culture of beer drinking fat lads and ridiculous running up and down a muddy field clutching a ball was something I happily left behind in school. The lengths that this city is going to, for the 2 or 4 nights that there are actually games on in the Cake Tin, seems ridiculous – and the proposed Weta sculpture, glorifying a jumping rugby lineout, is just ugly, tacky, and ridiculously expensive at $350k.

The city would be far better off to fund the Cuba Carnival, and scrap the statue. Priorities!