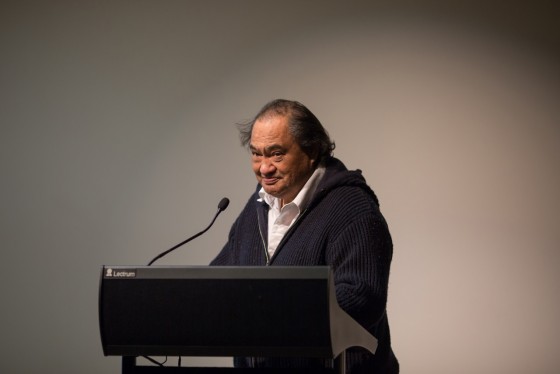 Sadly, very sadly, Rewi Thompson has passed away. An architect, a mentor, a professor at Auckland University, Rewi was of Ngati Porou and Ngati Raukawa lineage, but was also just an incredibly nice, friendly guy. I don’t think I ever heard him say a bad word about anyone. Having met him a few times, I was always impressed at the quiet way he conducted himself, and of the careful consideration he gave to his designs. And the equally fair and careful way he would draw out a compliment about the poorest student scheme…

Rewi, being one of the few Maori architects around in the 1980s, often had a perhaps undue load on his shoulders – to have to carry the expectations of many on his shoulders. He was not a showman like Dave Mitchell or Claude Megson, both super-confident in themselves and in their own abilities, but Rewi still had to stand up for himself as well as stand up for his race. That’s not an easy task, and I don’t know if he enjoyed doing it, but for many, Rewi was THE voice of Maori architecture for a generation. Today of course, things are a little different, with Rau Hoskins, Deidre Brown, Derek Kawhiti, Henare Walmsley, Paki Maaka, Brendan Himona, and many many more coming through the ranks, but still: it is a difficult path to follow, and John Scott and Rewi were leading the way. Kia kaha, be strong, and walk the path proudly!

Rewi’s architecture was different and difficult as well. Not everyone appreciated it. Some people didn’t “get” it, some others did. His house was one such example – uncompromising is the only word that springs to mind.

I’ve never been there and so all I have is the same photos that you have – but I imagine that the neighbours were probably a little wary and unkeen on this project at first, although it has mellowed over time. I recall Rewi speaking of the house at one stage, and the way he spoke about it made it seem an entirely logical response to the site, although I can’t remember now how he justified it. Can you help fill me in on the details there?

The NZIA notes that: “After completing a Certificate of Engineering at Wellington Polytechnic he worked at Structon Group as a structural draughtsperson before transferring to the firmâ€™s architecture department. He then studied architecture at the University of Auckland before joining Structon in Auckland. After registration, Rewi established his own practice in 1983. He rose rapidly to prominence with projects including his own house (1985), Boehringer Ingelheim Office & Warehouse (1989) and Pukenga at UNITEC (1991). Over the course of more than two decades Rewi served as MÄori design consultant for numerous projects, among them new educational, correctional and health facilities.
Rewi won numerous competitions and architectural awards, including a UNESCO International Award for a housing scheme designed for urban MÄori. In 2002, he was appointed Adjunct Professor at Auckland Universityâ€™s School of Architecture, and was a key figure in the education of a generation of Auckland architects. Recently, Rewi was a member of the creative team that produced Future Islands, New Zealandâ€™s exhibition at the 2016 Venice Architecture Biennale.”

Although I can’t find any reference to it right now, I recall Rewi designing housing for young urban Maori families in South Auckland, carefully trying to pare back what it meant to be Maori, and to get past the barriers that Housing Corp put in his way. He persevered, they got built, but I’ve never heard of them again since. Somehow, somewhere, I hope that Rewi Thompson gets a monograph made on his life’s work, of the built and the unbuilt, the schemes and the not-to-be schemes. Rewi – you were a lovely man – RIP.