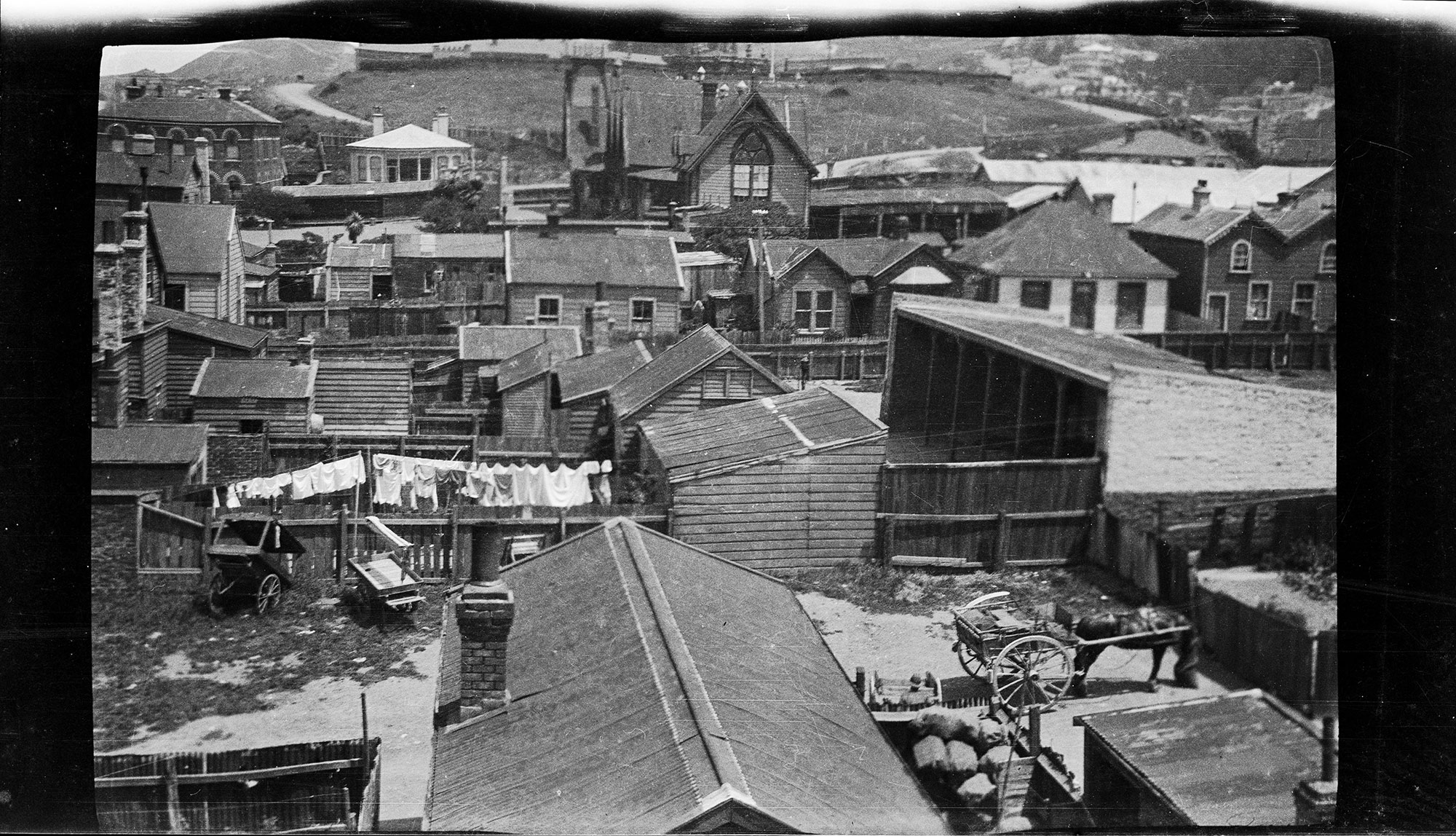 You’ll all be aware of the recent central Government dictat that New Zealand stop using greenfield land and instead learn to densify. This is a Very Big Thing for little old Aotearoa. We’re a country that still thinks of itself as a rural paradise, a land where the Quarter Acre Half Gallon Pavlova Paradise is still a thing (thanks Austin Mitchell). Actually, section sizes haven’t been Quarter Acre for over 50 years. 1012m2 of land as a suburban section in a NZ city? For the last twenty years they’ve been no larger than 300-400m2, so we’re looking at a twelfth of any acre at a more likely average, and I haven’t seen a half-gallon jug for years either! NZ is actually one of the more urbanised countries in the world, with 85% of our 5 million population already living in urban/suburban areas. We need to stop building over green agricultural land, we don’t want people building all over our mountain ranges, and in Wellington the centroid of our city is in the middle of the harbour. So where should we be building in the future? Well, the populace was asked last year and some pretty clear feedback came from the select few that bothered to reply: building in the city and in the suburban centres, not on greenfield land. So what is the proposal for Planning for Growth therefore?

There are three main areas: Central City, Inner Suburbs, and Outer Suburbs. Inner Suburbs – Mt Vic, Oriental Bay, Berhampore, Newtown, Thornton, Aro Valley, Holloway Road. Six storey apartment buildings in Newtown? Seems so. Current planning rules protect these characterful heritage buildings for their contribution to streetscape amenity, but character protections need to be eased. I’m going to talk about that on another day. Outer Suburbs – I’m probably not going to get to that at all. Central City – meaning the Wellington Central CBD, the Pipitea lands down by the Port, and Te Aro. What I’m going to concentrate on here is Te Aro, and what the proposal for Te Aro is.

Minimum building height in Te Aro of at least 6 stories and maximum building height to at least 10 storeys. Te Aro, apparently our most populous city suburb, sits alongside Thorndon and Adelaide Road, which are also strong focus areas for the area, so these proposals will affect a great many people. I was hoping to view this live at the event at Te Papa, but you know, Covid lock-downs and all: plus the original Star Wars on the big screen at the Embassy – so the movie won. I’m watching the “Planning for Growth” event on YouTube instead. So – several speakers were on stage, 3 male, 3 female. All highly knowledgable in talking about the WCC proposals for the future of our city. MC: Bryan Crump. The following are some of my notes from what the speakers said. Speakers: Kate – chief planner for Wellington. Gerald Parsonson – an architect, keen on the greening of the city. Rebecca Kiddle – a Victoria University lecturer, what’s in it for manu whenua? Aaron (Gen Zero) – opportunity is good. CBD is for everyone – a wide variety of incomes. Chris – creating more mixed use communities. Isabella Cawthron – Transport could make or break this plan. LGWM – place and destination being worked in. Auckland is now benefitting from very integrated thinking of both transport and development. At the moment, the integration here is… interesting.

At the back of the event, projected up on the wall behind the speakers, a Slido.com feedback panel for #pfglive with a number of continually changing questions Such as: “How are we taking care of character as we grow in the central city?” and “Where’s the equity? CBD housing is expensive. I’m not hearing HOW this is going to be achieved? Transport congestion? Water.” and also “How will the draft spatial plan enable housing affordability? Has the Wellington City Council discussed the draft plan with urban economists?” For me, the very interesting question: “Does the plan have a mandate to encourage developers to create family sized apartments instead of the shoe boxes they are currently creating?”

Rebecca Kiddle on housing affordability – asks “Affordable for who? In the central city we need to be enabling housing for families and others in the central city.” Gerald Parsonson – “lack of supply pushes up prices. NZ is just an expensive place to build – it just is. There are economies we can employ – scale, prefabrication, legislation for a certain amount of social housing over a certain scale.” Isabella – urban Nerds discussed these issues with a developer the other night “We need some new vehicles to channel private investment…We want people to be doing good development with a foundation of public good land ownership. Community land trusts. Housing providing ownership. Plethora of players. Businesses and cities. More intelligent development contributions.”

Chris – “we need audacious public transport options.” Isabella – “what does it mean to have a good life? You want to be able to do the things you want to do, you want to get the stuff you need to get. Ideally, you don’t need to expend a huge amount of your energy, your time, your money, getting there and back. At the moment, many are forced to drive because many of the other options aren’t there.”

WCC want our feedback on Planning for Growth. It is the Draft Spatial Plan for Wellington City and looks as though there has been a lot of work gone into the website – heavily driven by Maps and sketchy pictures of what the future may be. It describes itself as “An Integrated Land-use and Transport Strategy” but it is not sure to me whether LGWM has been part of the discussion or not. The PFG website notes that Te Aro is “An area that encompasses the city’s main entertainment district around Courtney Place, it consists of a diverse mix of uses from bars and restaurants through to small professional businesses, larger format retail operations and residential apartments. It is also characterised by lower building heights and level of density relative to the Wellington Central area.” Well all that is true, but that is also because it has been the official rule in the District Plan for the last 20 or 30 years: Wellington CBD was designated as the “High City” and that Te Aro was designated as the “Low City”. Low in height, they mean, but it was also always lower class as well, and one of NZ’s larger slums for many years.

Industry has always operated in Te Aro, with abattoirs, car assembly factories, food retailers, as well as the early ChinaTown, Te Aro Pa, working class and unskilled, and ever since its inception: drinking in public houses. There are good reasons why Courtenay Place and Cuba Street are the prime drinking places in the city: the edge of the working class area. Nothing like a good long cool drink after a hard day’s work. Below: the local. Working class cottages converted into Te Aro’s finest bar.

Critically, as I am sure you are all aware, the District Plan volume of Maps, defines that southern Te Aro has as a maximum of “6 stories” with a height limit of 27m. A 27m height limit with only 6 stories works out at 4.5m each, which has been causing problems ever since. Many developers and architects routinely try to use this height to their advantage: if you squash floor to floor heights down to just 3m, you can fit in 9 floors within 27m. Developments like The Peak and its ugly neighbours operate on this basis, with extra floors granted or at least asked for on the extremely dubious basis of “Design Excellence”. Other areas in the northern extent of Te Aro have a height limit of 48m (not low at all) and examples of this include the Soho Apartments on lower Taranaki St at 17 stories tall.

There is a real disconnect between the aim of the existing District Plan and the unfortunate outcome, with low quality shitty tower blocks. I believe the original aim of the “6 story” height limit was a neo-Hausmann vision of Paris, where a limit of 6 floors would be reached across the Low City. Mansion blocks, providing strong edges to the streetscape were strictly limited in terms of height. Baron Hausmann, for the maybe few readers that don’t know, was the lucky city planner at the time of Napoleon, who took advantage of an almost unrestricted budget to flatten large areas of the city of Paris and reshape them according to his own personal vision. An old, entangled, medieval street pattern extant in Paris was wiped clean and replaced by wide boulevards and a uniform roof height. The boulevards of Paris are wide enough for troops to march down now or for cannons to be fired down – no more Miserables mounting the barricades!

Te Aro has never been a medieval city of course, and nor does it have many aspects that Hausmann would be comfortable with: no boulevards, no cannons, no troops marching down the road. One exception of course: Taranaki Street is arguably our only boulevard and our only street that troops have marched down in anger (back in 1951 I believe). Boulevard it may be, but the buildings lining it are certainly non-boulevardian: its fair to say that ugliness rules from start to finish. Where did we go so wrong?

Te Aro has been redesigned once before, on paper at least. Te Aro Replanned was a work by the Architectural Centre back in 1947, with Bill Toomath leading on the very Corbusian redesign. This is the famous image produced by Toomath which must have startled the horses back then, and still startles this fish right now: I’ve been struggling to place the location ever since. Is that the side of Mt Victoria? Or Mt Albert? Lower Kelburn perhaps? Can you see Dixon St flats or Gordon Wilson maisonettes in there?

The important thing, of course, is what is the future of Te Aro? Crucially to me, is the vision for Te Aro to be a place to stuff as many people as possible, or is it a place for people to live and enjoy life as they do so? There is no doubt that it can be densified, but should it lose all its charm along the way? How would you densify it?