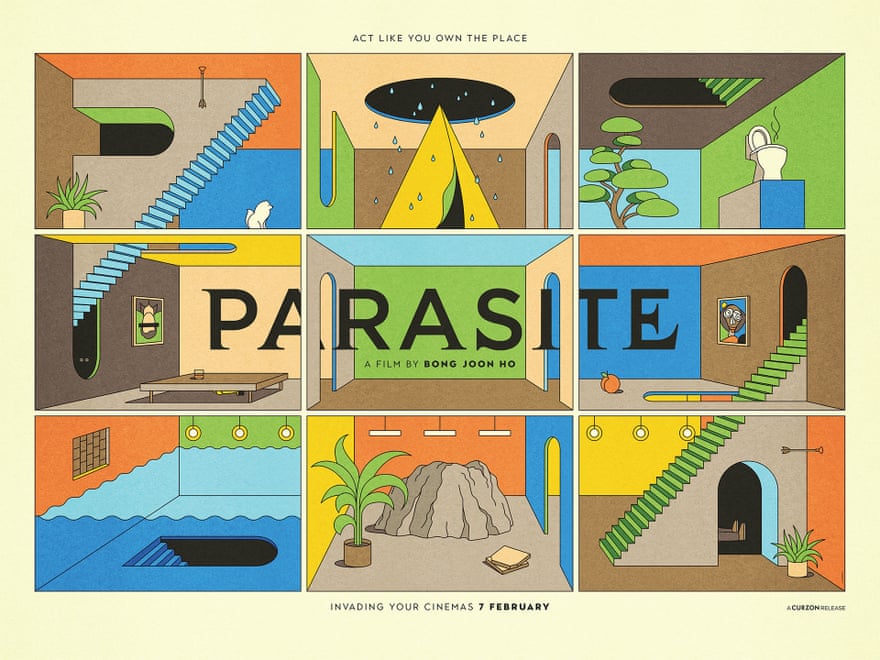 Walking into the Embassy, I didn’t know what to expect. It was opening night, before all the Oscars hype, but there was a buzz in the air – literally an audible hum. Clearly others had heard something, but if so, they were keeping schtumm – first night at the movies but packed to the rafters and in the Embassy that is quite something. Was it going to be a horror? A comedy? A drama? Definitely not a rom-com…

What followed was a dryly observed, sardonic depiction of the class struggle in South Korea, with excellent deadpan acting by a cast who reeked of talent (and at times, raw sewerage). I was entertained, titillated, bemused, delighted and unlike the Resident Rump, I knew exactly what that was all about. Gone with the Wind it was not – thank goodness too. The acting was excellent – the script was brilliant – direction superb – Oscars are well deserved. But predictably though, the real star was unheralded and unrewarded. The house itself.

I suspect that, like me, a few of the architects out there in the audience were sitting there thinking “I never heard about this architect in Arch School” and wondering whether the architect (Namgoong Hyeonja) was an associate of Mies, or if there was a little-known branch of Korean modernism that was flying under the radar. Superbly crafted Modernism, with beautiful timber surfaces, masterful walls of concrete, luxurious feel and warmth, along with a fine selection of preserved fruit and ram-don noodles. Is there a category for the set itself – could the house be a winner? It should! For those of you that have not seen the film, I’ll say no more, although I suspect that most of you already have seen it: if not, go see it now.

I was therefore amazed and bemused to discover the truth about the house – from this well-written source – and then also the inevitable check on Wikipedia here – but the attention to detail was huge – apparently even the proportion of the rooms was designed to fit in with the 2.35:1 aspect ratio to best suit the big screen (does that mean that they will have to redesign the house when it is released for TV ?). There’s more detail in an Indiewire article over here. Nonetheless, despite the fact that this is a set-designer’s interpretation of a fictional architect, there are some great lessons to be learned here, in terms of layering of space and presentation of the journeys through the house. Stairs, processions, open plan living vs basement storage. Its a masterpiece of course, with luxury in every frame, well, every frame in that particular house, not the other one… Set designer HJ Lee says: â€œIâ€™m not an architect, and I think thereâ€™s a difference in how an architect envisions a space and how a production designer does. We prioritize blocking and camera angles while architects build spaces for people to actually live in and thus design around people. So I think the approach is very different.â€ (IndieWire).

Not everyone is happy, of course: “Residents living in Parasite’s filming locations have reportedly complained of a sense of embarrassment and discomfort due to an increase in tourists visiting their neighborhoods and taking photos of their surroundings, making them feel like “monkeys in a zoo”.” says Wikipedia. Even that neighbourhood was a set, so that it could be flooded, but apparently that is a reality and the set was not unlike true to life student housing (both in Korea and here as well!).

The toilet scene reminded me of the descent into drug-addled shitty lifestyle enjoyed by Renton in Trainspotting – yes, you know what I’m talking about… which had the audience shrieking in horror each time the toilet bubbled. Oh such fun… Well done Bong Joon Ho !