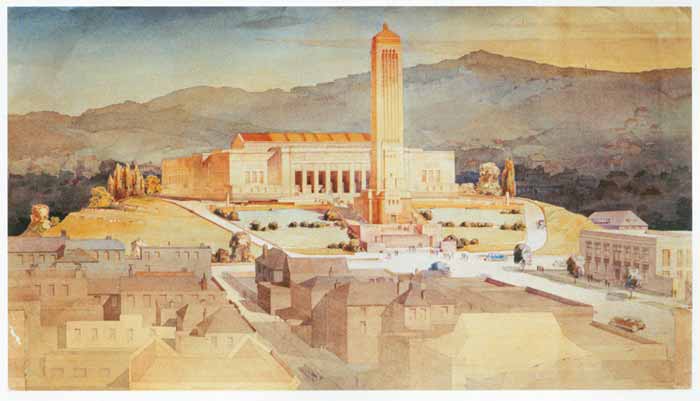 So today the news finally hits that the streets that the old, former Dominion Museum, now masquerading as part of Massey University, is being sought by the Government as a potential site for… a museum. Thing is, of course, that it is not actually owned by Massey, nor by the Government, but instead is owned by the Tenths Trust – or subsidiary thereof – who in fact are the descendants of the original landholders in the area. Not sure that they would ever want to sell that land again… but they may be prepared to lease it out.

I don’t think it is any great secret that Massey have always struggled with the use of parts of the Museum – the great Hall, at the formal entry to Massey, has always felt awkward and empty, and in my very humble opinion, doesn’t work at all as part of the University. If Massey would be honest, they would probably agree – the space is too large, too echo-ey, too much of a void and not enough of a place. Some would say – it’s a disaster. Others would say – it worked well as a museum, and can again… what a brilliant idea!

Putting two and two together, it could be argued that the recent sudden departure from Te Papa of the former boss, Michael Houlihan, and his ensuing new job as head of ANZAC day 2015, and person in charge of military pomp and glamour, would have something to do with this. For a man used to a building the size of Te Papa, then the temptation to grab hold of a big, relatively unused space up behind the National War Memorial, must be a logical progression. What is interesting is that the old Dominion Museum was abandoned for the big mothership on the foreshore because it never had many visitors – basically about a tenth of the daily amount that Te Papa gets. Of course, it was cut off by a nasty State Highway running at ground level across its front doorstep – and within a year, that won’t be a problem any more. The coming of the War Memorial Park, and the undergrounding of the highway at that point, really opens up the connection of the old Museum back to the rest of Wellington. Its ironic that so many of the current design team argued so hard for the route to remain at ground level, so that drivers past could enjoy the sight of the carillon and the War Memorial, but that they are now busy championing the opposite, and celebrating that the road is underground. And so they should be – it was always the best answer, the only logical answer, and the only proper way to recognise the gravitas that goes with a national monument like this. Its doubly ironic though that now the cars are going, the people may slowly wander back to repopulate the area.

Green Screens and the Presence of the Void