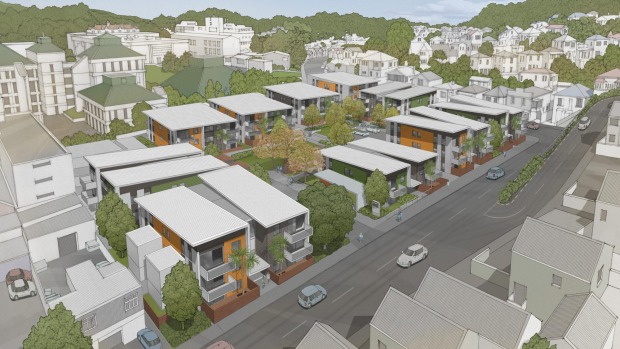 Good news today – at least I think its good news. WCC is to build 750 more houses, in order to help relieve the incredibly tight housing market we have here. It’s got ALL the buzz words we want to hear: New, Affordable, Social, Warm, Dry, Housing, funded from a ring-fenced fund which won’t cost anything to the ratepayer. Seriously: what more could you want?

It’s not exactly a huge surprise, as the SHA for this area was devoured a year or two ago, but it is good to finally see some movement on this Special Housing Area. Up in Auckland, they have been trying to build on their SHA as fast as possible, but Wellington was looking pretty much like a SHAM on the SHA front due to their inaction.

The original article on stuff seems a little confused to me – it includes the Arlington 2 project as part of the 750 (already started on site), and one day going to look a little like this:

That’s very much just a lowish medium density, not really trying to pack them in on site, unlike the Arlington House nearby, (the really adventurous, really dodgy, leaky, earthquake prone one):

Some quick maths on this: $200 million for 750 houses, equals an average of $266,666 construction price each (not including land, as the Council or Government already own the land), and if you allow $2000 per square metre construction costs, then they will average out at about 133m2 each. That all sounds about right. No doubt there is a mix of sizes and purposes, but 130m2 should be able to make a perfectly adequate three bedroom townhouse. Hawkins Construction have the current lead contractor role on the Arlington project, but the remaining houses will be scattered around the city on other sites, and so will be up for grabs. Interestingly, the 105 units currently under construction are costing $33 million, which averages out at $314,285 each, about 18% more than this next phase. Do they have enough money, really?

There are a couple of questions up for discussion though: firstly, what is going to be done with the Arlington House Athfield Tower? It badly needs work, but it is also a pretty exciting, individualistic building, with views to die for. The other (new) houses are nice, but pretty suburban really. We could get a better, more dense solution, could we not? Who are the Architects? It looks like either DesignGroup Stapleton Eliot, or maybe Architecture Plus? Lastly: where are the other sites going to be, and are they going to be out for design tender to other architects or is this all packaged up already? So far, all that is said is that: “Other sites will be mostly on existing council housing land in the CBD and beyond.” That leaves it pretty wide open if you ask me…