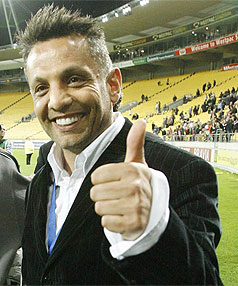 The folk here at the Fish have been following the reshuffling down at the City Council with interest, as they restructure the Urban Strategy Group yet again and find new positions for expired urban designers and heritage advisors. We’re given to understand that this morning they will be announcing the addition of a new position to the team, in the form of a new City Architect. In a surprise move, the position is heavily rumoured to be going to a prominent business figure within the Wellington development community.

The candidate, who we are unfortunately not yet able to confirm by name in the position, but who may be hinted at in the following series of photographs, has a keen interest in vehicular design and is a regular sight on the fashion scene. The new candidate is known to like to keep a low media profile. He has a strong and well-respected string of high profile building projects under his well-tailored Hugo Boss belt, including recent developments such as the “Millenium Village” apartment building and motel. With regard to tall building projects, he has been noted as saying that Wellington needs more eye-opening projects, and that he would really like to have a big one. He has been quoted as saying: “There’s no use earning a whole lot of money and not doing anything with it.”

The Mayor has made it clear that the cross-over appeal of the new Council figure-head will be enhanced by the candidate’s strong connections with the sporting codes of the Capital, and the subsequent support of the Phoenix is likely to be especially welcomed. Wellington’s home and away fans are now renown for their fanatical support of their team, their adoption of yellow clothing, and their shirtless rendition of support songs, although it is fair to say this is not a tactic that we expect to see in the upper echelons of the Council hierarchy.

But the Mayor is especially pleased that the introduction of new means of control over the minds and hearts of the Council employees will be possible, and may well become an important means of controlling staff churn in the various departments, given that recent reports have indicated that turnover of skilled Council staff is at an unacceptably high level. The Council is alleged to be keen to implement a new policy, to see if they can retain staff for at least one year before they get dis-illusioned by restructuring, and move away. While it is unusual for Council announcements to be made via 3rd party websites, this has been done successfully before. We understand that the introduction of certain branded television reality shows into the Urban Group has not, as yet, been confirmed as policy, although a short, sharp announcement in the style of the show, is expected around mid-day from PR mouthpiece for the Mayor, Richard MacLean.

“The new City Architect has been selected on account of the exceptionally high design standards of the successful applicant, and the exemplary qualities he has shown with relation to client-contractor relations,” a spokesperson for the Council noted prior to lunchtime today. “The standards of Urban Design noted from the applicant are exceptional, especially when it comes to tricky sites like sensitive additions to inner-city rooftops, and modern interpretations of the Cuba Design Guide. We have the utmost confidence in his ability to handle Key situations.”

Other front runners for the position included another well-known Wellington property holder, a novelist of some repute, with over 20 books to his name, whose views on fly-fishing, boxing and property development are understood to be behind a bid to oust the current Mayor from her position. We understand that efforts to pedestrianise Lambton Quay have met with glowing approval from the Mayor, but this has failed to entice her onto his bus ticket.

A spokesperson for the candidate for City Architect was not available for comment. We understand that there is no truth in the rumour that he may be taking on an apprentice for the position.