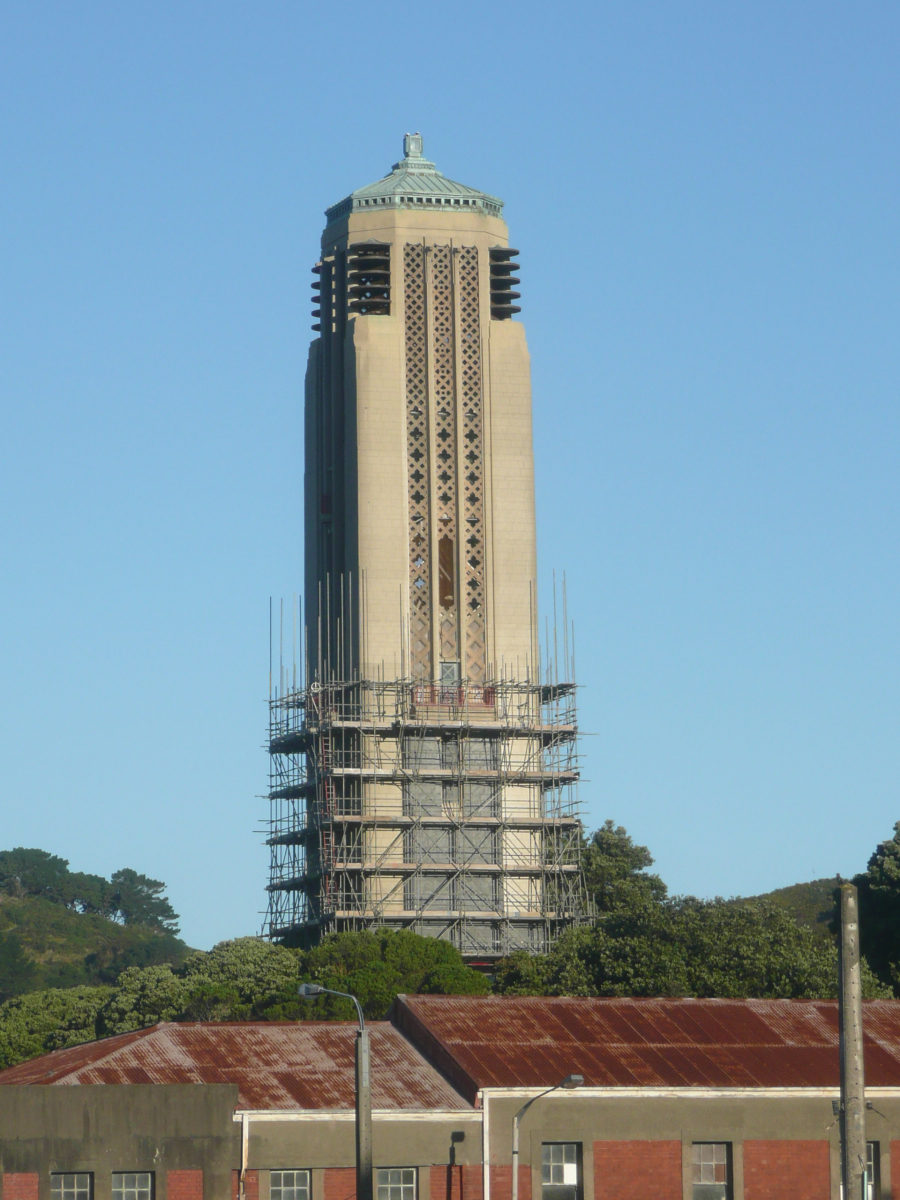 In some pretty shocking news that has just been leaked out of the new super-ministry this morning, the National War Memorial in Buckle St has been declared to be an earthquake prone building. The building, completed in 1932, has a concrete frame, but the weight of the heavy bronze bells in the Carillon is thought to have caused hairline cracks in the superstructure. The workers undertaking emergency repairs to the external stonework panels this week, say the structure, seen here in its current state of scaffolding, has scared them greatly. “Its not just the sound of the bells ringing at midday that scares me” said one. “It’s the thought that this may be the last tune I’ll ever hear if this lot comes tumbling down.”The structure has been rated at less than 33% of the current Building Code’s seismic strength, following a WCC drive-by IEP assessment.

Acting prime minister Gerry Brownlee (no, don’t laugh, that’s true!), has rubber-stamped the decision after a cursory meeting with the Historic Places Trust. Brownlee is reported to have said: “Look, its an old dunga and it has to go.” Historic Places Trust chairperson Ann Neil has said that there has been so much demolition in Christchurch recently, and that the HPT had decided to do nothing about this one either, as they were “worn out”. . Ms Neil is reported to have said “Well, yes, it is Grade 1 listed, but that doesn’t mean anything nowadays. If the Minister wants to knock it down, he doesn’t even need to ask us any more, so what’s the point in kicking up a stink over nothing?”

Although the Wellington City Council has been taking a careful, pro-active position on its building portfolio as of late, with promises to shut the Town Hall for two years so catch up on seismic strengthening and other works, the War Memorial is held in trust by the cash-strapped Ministry of Culture and Heritage. The MCH has recently signed over the ownership of the proposed War Memorial Park to the NZTA so that they can build an “urban expressway” through the parkland, and connect it to a double flyover near the Basin Reserve. It is thought that the MCH has no funds available for any future work, and so they are apparently also unlikely to fight its demolition.

That therefore leaves just Stephen Joyce, new uber-minister for Building, Working, and Thinking – or whatever they call it this week. As head of the Ministry of Working, he is keen to get the Memorial itself out of the way, as it currently causes big traffic delays twice a year. Minister Joyce was reputedly not available for comment today, but our sources say that he has ordered demolition to go ahead as soon as midday tomorrow. “Public safety is paramount, and if this structure fell over it would block State Highway One, so we have no choice really but to knock it down.”

We’re deeply saddened to hear about this, here at eye of the fish, and will be out laying on the ground in front of the bulldozers if this terrible bad dream does come to light. If you squint really hard at this last picture, it will show up the hairline cracks in the facade that are causing all the concern.