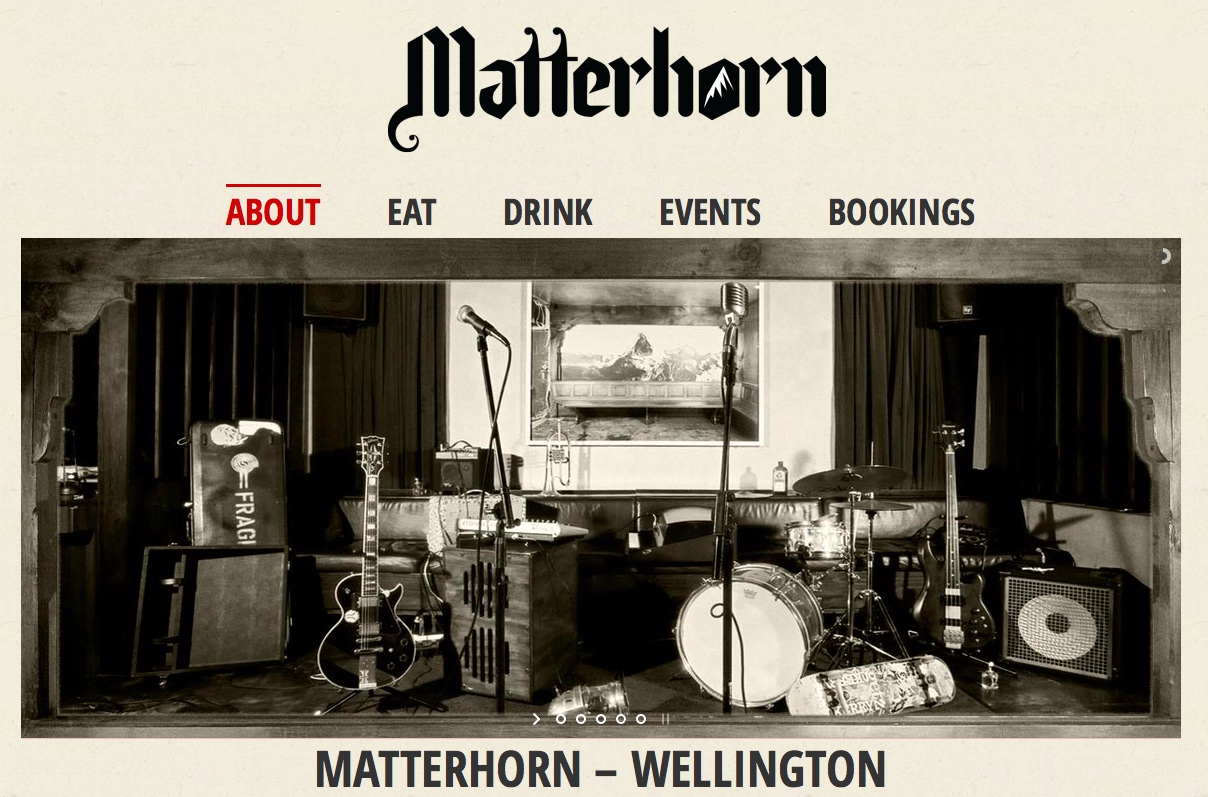 Sad news today that the Matterhorn is to close. A Wellington institution, a Cuba St staple, a 60s icon beyond compare. In many other worlds, the Matterhorn would be a sacrosanct thing, a protected and listed function, and yet here, at the word of an engineer, it is to be largely destroyed. Sad indeed.

But hold on a sec – is that all true? Is it all really going to go? What is there really? Is the heart of the Matterhorn the inside or the outside? The bricks and mortar, or the bars and tables? The staff, the mural, or the atmosphere caused by an alcoholic fog? I’m writing this at 4 in the morning, for unknown reasons, so this may make no sense, but that seems rightly appropriate for a requiem for a bar. Although, of course, I am not drinking – as Maximus would say, a Fish drinking? Whatever next? When it really comes down to it, what do you love the most about the Matterhorn? Where exactly is the horniness and what does it really matter?

But it matters to me. There is beauty and quirkiness in the facade, of course, with a flatness and the most Wallpaper of ironic incised murals, which you would find hard to repeat. To me, as an architect, the facade must be retained at all costs – i think of all the buildings in Cuba Street, it is this facade that I love the most. And yet, to most people, I suspect it is not the facade – in fact, i’d wager that most drinkers inside have no recollection of the outside. Both before and after their visit to this establishment. So – what else? Where else is the essence of Matterhorn? Is it the plan?

In fact, who would ever plan a building like that? Born as a back-room cake shop, a tea shop in 1963, by two Swiss brothers, apparently, the plan has always amused me. Who would ever design premises that are only accessible by a long corridor that feels you are on the way to the dunny already? The focus, of course, has always been the large black and white iconic shot of Switzerland’s finest emblem, the Toblerone of all mountains, the cuckoo-clock of all timepieces: the Matterhorn itself. Have you noticed it at all? Of course you have – yet, you can’t save a building just to save a tired old grey-on-grey poster.

Is it the architecture then, or the staff? The architecture is relatively new, of course, as are most of the staff. The staff can be transferred from one location to another, and indeed in Wellington they transfer themselves. If your favourite barman moves from one establishment to another, do you too transfer allegiance just because you enjoy the taste of his mohito more? If so, you’re a rare breed. Most others just drink up, and order another. When the original Wellington owners sold up and moved on, did you boycott it because it was bought by Aucklanders? If so, why so? If not, why not? Or is it your favourite waitress, you know, the one who smiles so sweetly as you peruse the menu? You know they’re paid to be nice to you, don’t you? They don’t really fancy you, you bumbling fool. But at the Matterhorn, the attention feels genuine and the menus are encouraging you with exotic visions of a delicate roste of gratin with a caramel mousse and a wee dripping of elderflowers, served on a bed of lebanese wildflowers with jus de couchon drizzled over a cinnamon stick whilst reading Marcel Proust. Or something like that. For me, it is always the food.

Let’s face it – it’s the atmosphere. It is the can’t-quite-put-my-finger-on-it combination of the food, the cocktails, the waiters, the menu, the fireplace, the uniforms, the barstaff, the noise, the lighting, the toilet facilities, the deep-fried goats cheese camembert drizzled with wild african honey served with an extra lashing of irony by a staff member wearing a mock army surplus chemise, starched till the buttons are bursting and filled out nicely with an endearing smile. All of which can, indeed, be replicated elsewhere, but so rarely is. Can they really take the atmosphere with them? Should they, like the other well-known bar, take the actual bar top itself with them when they move? Is the physical surface of the drinks cabinet the real heart and soul of the establishment? I doubt it, and yet, its a great tradition to have been established, and perhaps it is one that is worth keeping.

The architecture, of course, is a gold mine. There is little there that is original, as it has all been rehashed over time, but what is there is a masterclass in late night drinking. My guess is that half the hangovers in Wellington were hatched within these very doors, and a fair number of children as well owe their existence to late night hookups springing from the loins of this bar. We owe the success of the Matterhorn in a large part to two people, the original owner ? and the brilliant young architect Allistar Cox, for it was from his fevered mind that this brilliant monster grew. Mr Hospitality indeed. In fact, i’d wager a bet that just as Cox grew the Matterhorn, the Matterhorn was the making of Cox as well. It is a masterpiece of subtle design, something not done often and often not done well. But here the surfaces are all thought about. The lights are permanently turned down low, so as not to burn holes in your alcohol-damaged retinas. The ceiling is brown and woody, varnished and burnished, with inset lamps glowing vaguely, suitable for a late-night tryst. The tiling in the bathrooms are ironically sixties-ish, while the actual barstaff themselves are just ironic. Floors and walls are, from memory, concrete, but the floors are polished for cleanliness and the walls are suitably roughened, very slightly prickly with a sponged sandy finish. God is, after all, in the details. Daylight falls on the garden at the perimeter, yet sound is retained within their expensive, retro-fitted rooftop. The fireplace roars outside (still?) for winter carousing yet the awning rolls back for hot summer nights. The background music is always at the foreground, and suitably, agelessly, timelessly hip. All of these things matter, to a bar, and to a bar fly. The logo for the Matterhorn is suitably Swissical, if such a thing exists, and the spaces in the bar are constricted enough to be intimate, yet can be large enough to hold the entirety of Fat Freddies Drop and an audience as well. Recordings have been made here, lives have been lived here, marriages have been destroyed here, love has been found here. The Matterhorn will live on in the hearts and the minds of Wellingtonians, no matter what, but I’d quite like it if they could retain the facade, as well as some of the life and soul that grew behind it. LT McGuiness are saving the facade of the Farmers building, next door, can they save this one too? Can they do that? Somehow? Please ?