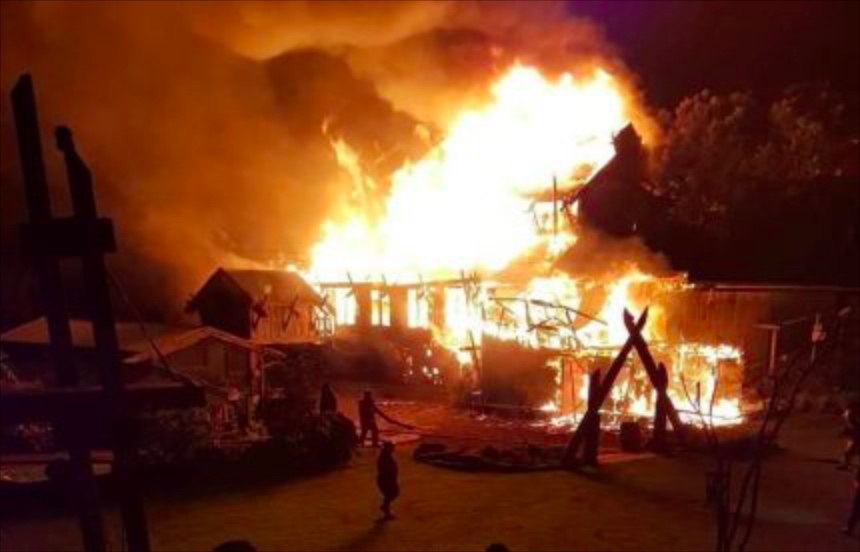 Sad news this weekend that the Tapu te Ranga marae has burned to the ground. Sounds like the blaze burned so strongly that everyone on the south coast would have seen and smelled the conflagration. Just about every fire appliance and fire fighter was there, trying to save the structure, but to no avail.

The good news from this tragic event is of course that no one was killed – over 30 people were staying at the marae that night – many of them boy scouts on an adventure – and imagine the scene if they had been trapped inside and incinerated along with the building. Luckily they were evacuated in time and quickly rehoused elsewhere in Island Bay.

But no one is entirely surprised by this news, as the building had for many years been the subject of disagreement between its founder and the Council. The building was a deathtrap, a fire hazard, non-compliant with the fire code said the Council. We don’t need to comply with your pakeha bullshit rules said the builder, you’re just trying to repress our spirit and our drive for self determination. Maybe so, but the Council was right: the place was a tinderbox and went up like a torch, with a remarkable lack of lives lost. Nothing wrong with pakeha bullshit building regulations if they save lives and protect property.

I met Bruce Stewart a couple of times over the years, and he was a remarkably affable and charismatic sort of guy. Confined to a wheelchair in his later years, Stewart had built the accommodation block over the last few decades with the help of ex-prisoners and gang members – unskilled but enthusiastic builders. No doubt there were many in the community who did not want it there but it seemed to have grown to be accepted in later times, with many now saying it was a treasure of indigenous design. Stewart himself was proud of the fact that he had beaten the Council at its own game and described how he was talking to them about getting an exemption from all those tiresome rules. All the building material was recycled native timber, exposed to reveal the beautiful grain of our native timbers.

But the beauty of the grain in exposed timber is no match for the power of combustion and has been the end of many a marae over the years. New Zealand actually has a special recognition in the building code for the unique situation of the marae which is not evident in other countries building regulations: many people sleeping together in one room. People die in buildings primarily in their sleep, often caused by smoking in bed, while people rarely die of fire in office buildings – largely because they are awake, smell the smoke, and escape quickly down the emergency exit stairs away from any blaze. Sadly the boring old truth is that two things would have saved the marae: a shitload of Gib plasterboard on the walls and ceilings along with fire-stop doors and bulkheads; plus sprinklers. Yes, sprinklers are boring and expensive, but they do their job and save buildings and save lives.