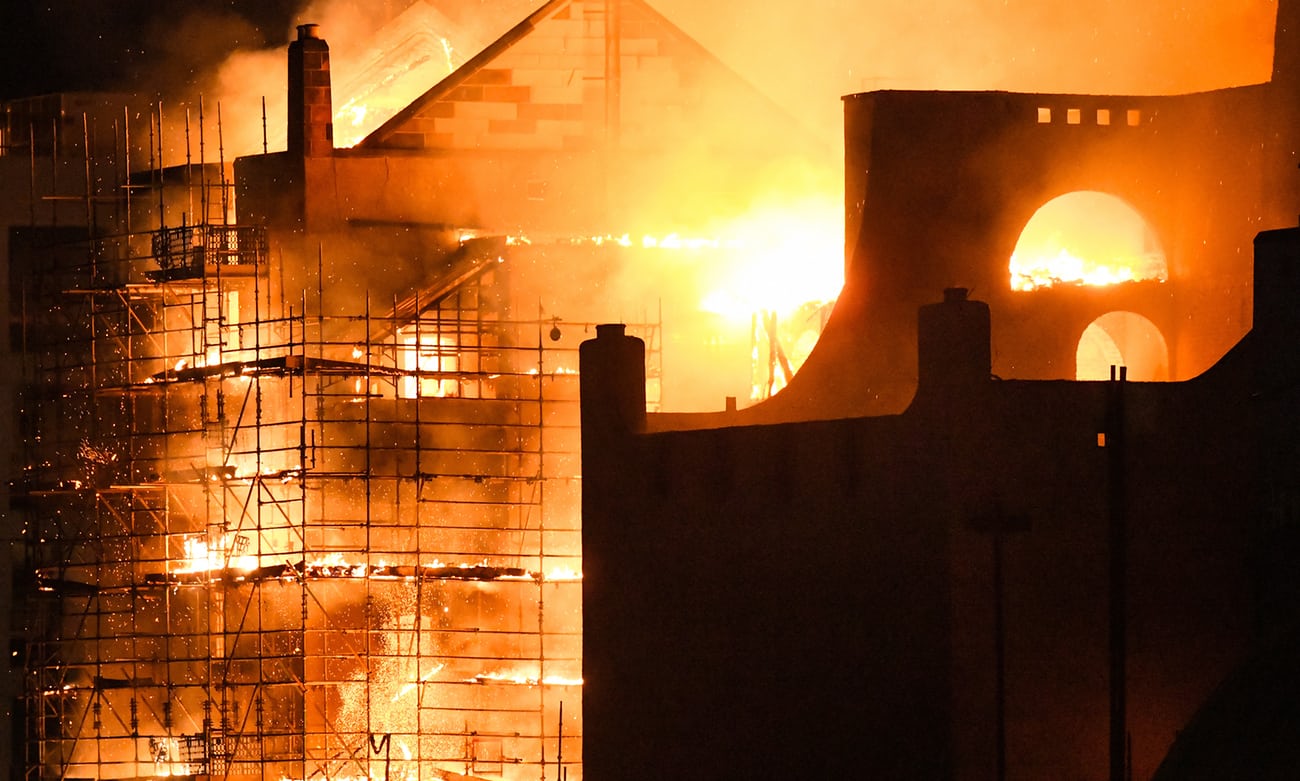 I just about wept when I heard about the first fire at the Mackintosh School of Art in 2014. I’m not at all amused that they have just suffered a second fire, only months before the building was due to be handed over, post-restoration. To lose your building once is a tragedy, to lose it twice is just careless. And when you have a building as iconic, as “one-off” as the Mack, that’s just doubling down on the tragedy.

The first fire was caused by spray from a foam model being made by a student – fire rapidly taking hold in the tinder-dry conditions of the old school. Fires are notoriously destructive when in old stone buildings with wooden floors between – the thermal envelope of the walls just act like a chimney, intensifying the fire. Last time, 90% of the building was saved, with the main victim being the centrepiece – the Library.

This time, the damage is far, far worse – the heat so intense that it melted the roof of the building next door it seems – an O2 sponsored theatre building, that you can see in the police photo above, has collapsed inwards. Tragedy, as a word, doesn’t really go far enough. Last time the artistic community rallied around, with an auction of works by artists who had been through the Mack, using charcoal from the fire to draw, sketch, or create unique works. Total rebuild cost last time was estimated to be Â£35m, with the students moving back in by the end of this year.

Now, however, it is totally fucked. That’s a blunt, crude word, but is a true Scottish word for the situation. Last time, the heat of the fire caused damage to a few of the stones, with the cooling blasts of water causing heat stress and cracking in the stone.
“At the height of the fire, the buildingâ€™s stonework endured temperatures of up to 1000C (1832F), and was then cooled down very quickly by the gallons of water used to douse the flames. This has left some of the stone shattered and fissured and and too weak for reuse.” Source: the Guardian

This time, the amount burnt is so massive that much more damage to stones will have been caused. Steel windows have obviously burnt right out – steelwork on the exterior has probably gone as well. Last time, the iconic hanging lights in the Library were lost in the fire, but:
“forensic archeologists rescued 620 individual pieces of brass plate lamp fittings from the ash and debris in the library. The fragments were then sorted into â€œlight kitsâ€, dependent on their location in relation to the 48 original light fittings that had been hanging on the day of the fire, and enough useable material has been saved to remake 29 complete lights.” Source: the Guardian

Have those new lights been installed in the Library yet? If so, they’re gone again – but my guess is that they won’t have been fitted just yet. Also, last time, during restoration the Scots were horrified to learn that the iconic oak timber posts of the double-height volume in the Library were not, in fact, solid oak at all, but were in fact just an inch-thick oak veneer over a cheaper species, which reports at the time noted as “cheap New Zealand kauri pine”. Tall, straight-grained, immensely strong – yes, that’s our kauri alright! Cheap? Not so, any more. We can sell you some nice LVL pinus radiata though now, if you’d like that?

There must come a time however, when you just throw your hands up and say “Enough now”.

“The fire at the building, which was designed by artist and architect Charles Rennie Mackintosh and built between 1897 and 1909, has been called â€œdevastatingâ€ by the city council leader Susan Aitken. Paul Sweeney, shadow Scotland minister, said the Mackintosh Building was the â€œmost architecturally important buildingâ€ in the city:

â€œOh dear, the 1909 library extension, that was the origin of the 2014 blaze is now fully alight too. It looks like the entire interior space is now fully alight. The best we can probably hope for is structural facade retention and a complete rebuild of the interior. Devastating. There must be a comprehensive national effort to ensure every possible option to salvage and restore what is one of the finest edifices in the history of world architecture is pursued in the wake of this latest setback.” Source: Glasgow Herald

Is it time to call an end to the Mackintosh, and start again with a new building? This time, one with a functioning fire suppression system? Here in NZ, of course, we tear things down all the time, mostly because we pretend they are going to fall down in case of an earthquake, but mostly because we are cultural heathens with no sense of architectural history. So, Â£35m last time – and at least quadruple that this time. Glasgow – is it worth it? The people say…. ?