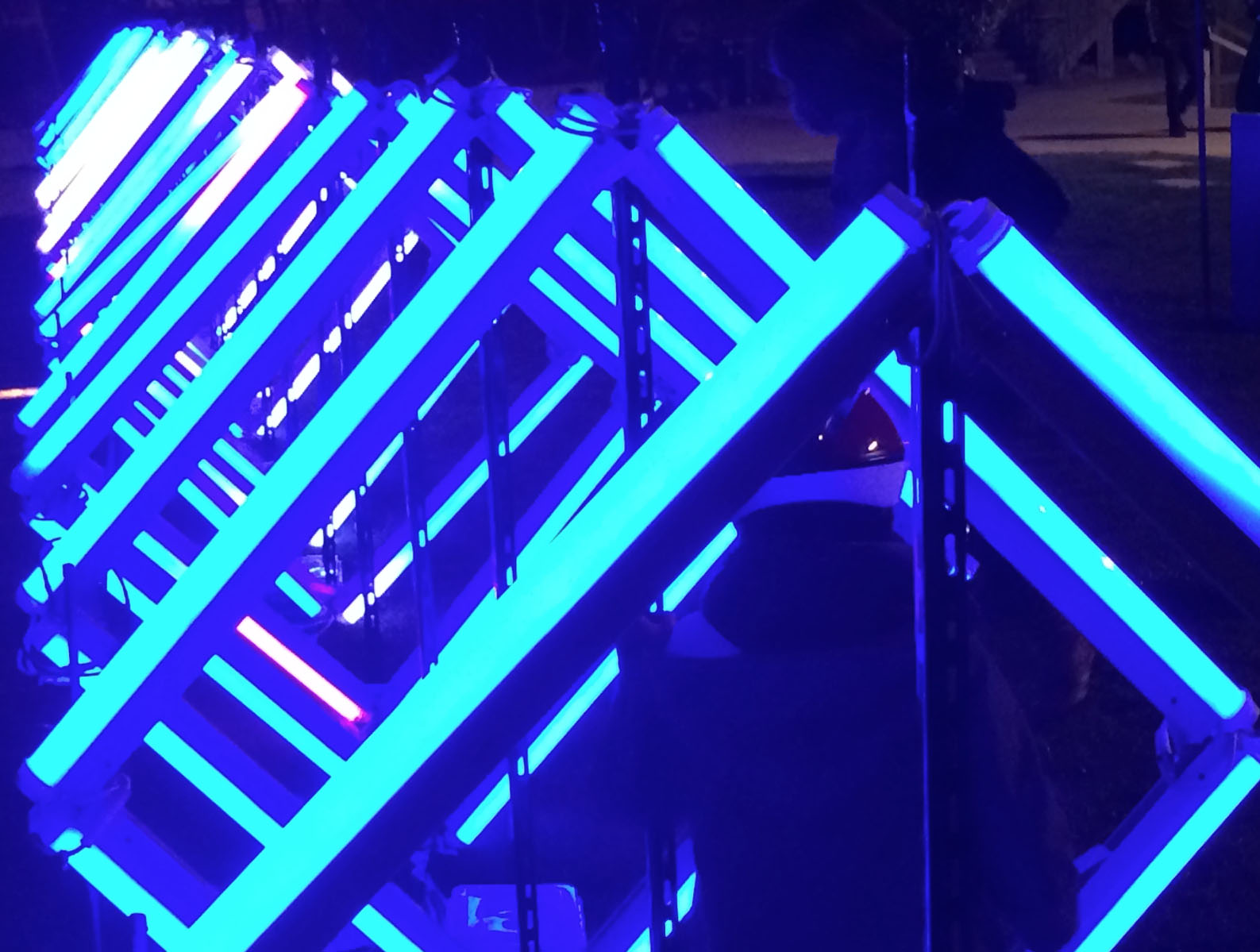 Hooray for us! Wellington was indeed blessed last night, as the first evening of the Lux festival took off. The weather behaved itself (dark, no wind, and nearly completely rain free), the crowds of people roaming the waterfront and lane way enjoyed themselves, and the luminous artworks were superb. As they should be – Wellingtonians are used to festivals and know when to go out and grab one – just fantastic to watch small children out and about on a cold dark night, chasing rainbows up and down Opera House Lane or freakinng their parents out by running along narrow paths on the waterfront. As far as I know, no one fell in the water, which is probably a good thing, and I’m hoping that the various bars, cafes and restaurants along the waterfront got a good healthy boost from the excited late night punters.

The nature of night time events like this are common enough by now. New Plymouth has its annual Festival of Lights, in Pukekura Park at Christmas. That’s a very family oriented affair – a lot warmer, obviously, but also later in the day due to the sunset at that time of year. It’s a freaky thing to find children out at night – they’re not a usual urban nighttime phenomenon but in New Plymouth, they are everywhere. The Lux fest in Wellington is quite a bit different – being artist based – with less general lighting of trees and scenery, and nearly all the pieces being seriously phenomenological with interface of sound and light.

Several of the artworks required audio input – reacting to the input of the people watching. Basically: the louder you yell, the more things happen. Although I can see that not being a popular feature with the nearby inner-city apartment dwellers near those particular installations, it was certainly being enthusiastically taken up by the younger, and the less inhibited parts of our congregation of light-worshippers. My ear-drums were not so enthusiastic – I prefer the audio feedback that required your movement rather than your vocalisation. Not sure what it was called, but one installation, under an old pohutukawa tree in Frank Kitts Park, was seriously voodoo jungle magic – two 44-gallon drums packed with clever sound and light kit – has to be seen and listened to rather than written about. I stayed, played, swayed, for a small age at that alone.

Post script: Curious things at Lux. Firstly, the ordinary stock-market tickertape dispaly on the Share Market / Odlins building looked especially festive and highly appropriate tonight, with the green, yellow, and RED reflecting in the water. Red of course means that someone is taking a bath on the exchange – but wouldn’t it be nice if we could manipulate the market to provide appropriate colours for certain times of the year? Hah! Manipulate the market?! I’m sounding like a true member of Team Key now!

But the other thing was – I took this photo of a man coming bounding down the newly refurbished Operas House Lane – he was in the view finder, and then he had miraculously disappeared. Now that I’ve got the photos back from the chemist (sorry, old school joke there…) i have found out where he went – he mind-melted into the wall itself! Well, either that, or he was going through a trap door back stage at the opera himself… a phantom, so to speak…. What we do in the shadows indeed….