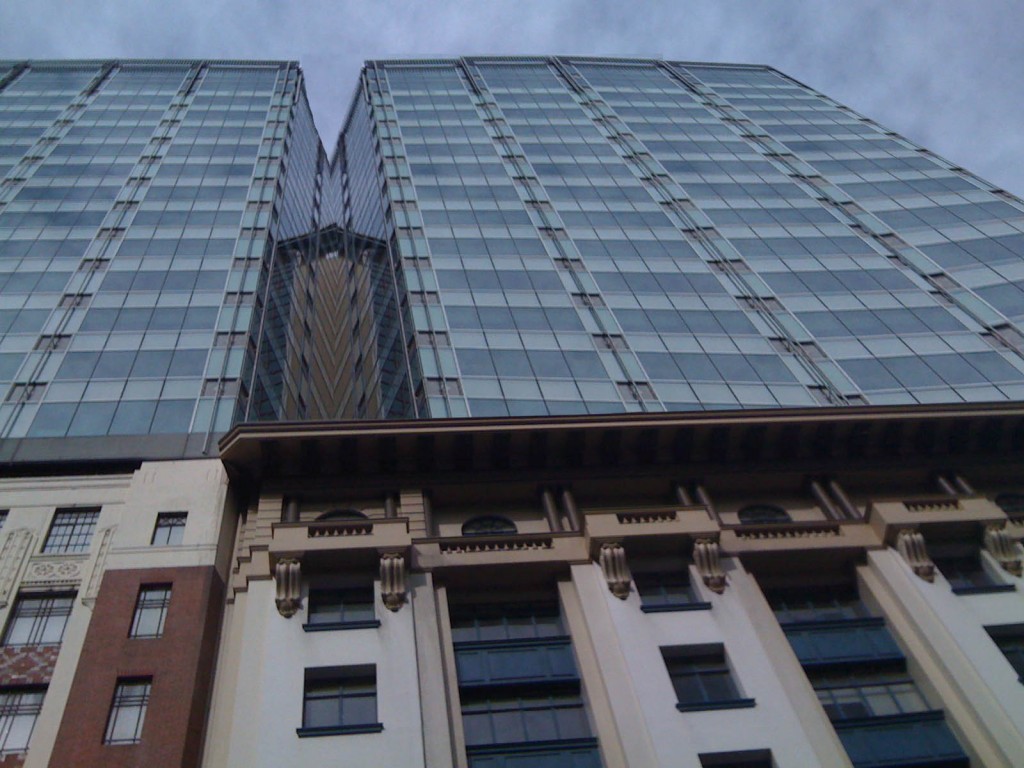 Ancient Wellington property developer Mark Dunajtschik’s dilemma over the Harcourts building is in its final stages of legal action. I’d maintain that, while this is a tedious re-examination of all the evidence that has gone before, it is also one of the most important (in an architectural sense) cases that New Zealand faces, and will have important ramifications for the future of NZ’s past. And with the announcement today of his proposed sweetener / bribe / incredibly nice goodwill offer, then it makes the stakes even higher.

For those of you that haven’t heard, Dunajtschik is apparently now offering to donate $10million to help restore two iconic Wellington landmarks – $5m each to St Mary of the Angels and to St Gerard’s Monastry. That’s an offer of incredible generosity, and one that can’t be sneered at, despite what you may think of the Catholic church and their quagmire of worldwide pedophilia, and a knee jerk reaction by many is that the Catholic church have much money and they should simply spend it themselves.

But is this a real offer, or is it just grandstanding, and does it even have a place to be debated in the Harcourts debate? To me, Dunajtschik is simply barking up the wrong tree. The issue is, of course, incredibly complex, and yet at its heart it is quite simple: demolish the Harcourts building or restrengthen and restore? Mr D keeps saying that it is too expensive, too much in the too hard basket, and yet he has bought it all on himself. He has been a greedy, pushy, and fiscally imprudent developer – he developed the building next door, he put the cursed lift and stair core smack bang in the middle of the light well of the old Harcourts building, and he is the one who has caused it to be unlettable. He has proposed that the old building could be demolished, and then re-created in polystyrene overcoat in a facsimile of the original, although crucially, what he says he might do is not not part of the proposal. And to me, that is where his argument comes undone and falls to the ground like a pair of rumpled trousers.

Sorry, horrid visual there. Moving on…

Quite simply: D says the choice is that he must be allowed to demolish, or that he will leave the building there to rot for eternity, or until it falls down and kills people in the next big earthquake. Actually, I think that he is 100% wrong, and that legally, he should be thrown out on his skinny white arse.

Dunajtschik needs to stop offering dingleberries such as St Gerards or St Mary’s for the city to suck on, and man up to the fact that he is not offering a valid replacement for Harcourts. His current Resource Consent application is for the demolition of Harcourts, and it is this that he has spent millions debating, hiring local bulldogs to savage the legs of the Council’s expert witnesses. What he needs to do is to put in a Resource Consent application for what he is proposing to replace the Harcourts building with. It’s that simple. They will never want to say Yes to someone who simply wants to replace a heritage listed building with an empty section in the middle of the town, and a promise that he may build something on that site in the future.

What is a completely different story, is to say: what do you propose for the future? What is this future building, of which you speak? What heritage lookalike is it that you want, and how good or bad is the details of this polystyrene wall? Yes, the existing building has been an important part of Wellington’s heritage for the last almost hundred years, especially in shaping the city by virtue of its bulk and dominance on the street, but it has been hopelessly compromised by the insertion of MFAT’s stairwell in the light well and – well, I for one, would like to see what a 25storey tower would do to the city if the MFAT extension was built on as Dunajtschik obviously plans.

This problem has been completely brought about by the developer himself, and he has the power to resolve it as well. Let’s change the question from Demolish or nothing, to a different one: if so, then what?

Slaters in the woodwork