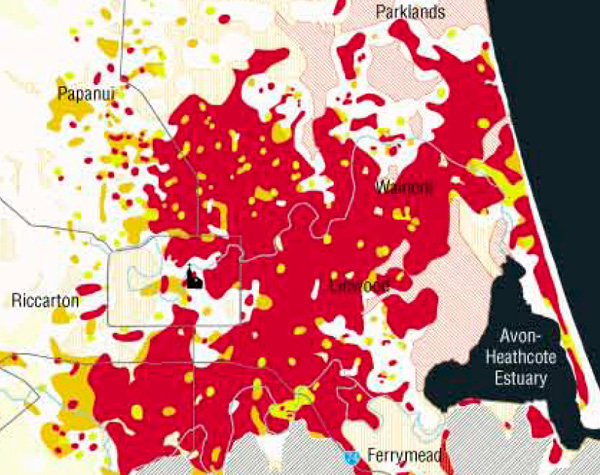 In case you didn’t know enough about it already, we present to you some liquefaction for your degustation, ingestion and digestion. Oh yes, we’re all experts now, but would you have bought a house in the Eastern suburbs of Christchurch if you had seen this map before the earthquake? And if you’re interested in finding out about Wellington’s proclivity to this and other potential disasters, then click here. And the Hutt valley is here, wonderful sunny Porirua is here and the Kapiti Coast lives here. We’ve got a lot of hazards!

I’m not sure if you can quite read the writing on the map, but the gist of it is that it shows the likelihood of liquefaction occurring to Canterbury when there is a high water table – which, seeing as we have had a bit of a wet summer, and the hydro lakes are overflowing, I’m guessing had a fair bit to do with it. 264,000 tonnes of silt have squeezed up out of the ground – the locals I’ve spoken to said it happened almost instantly – the ground shook them to the floor, and when they got up there was silt oozing up from every pore in the ground. The image I have in mind is running along the beach just above the wave line – and the water squishes out from between your toes or from around your jandals.

This second map shows an extreme close up of the likely suburbs to get hit – East side – you’re deep in the red. Or, knee deep in silt, as you will have noticed. The map, based on geological info from geotechnical surveys of the Canterbury subsoil by Beca and others, and published by Environment Canterbury (which the observant amongst you will remember is the institute that National sacked last year for not toeing the party line and allocating extra water rights to dairy owners in the region).

Based on this info, if this map had been published a bit more prominently, would have to have you asking – what the heck were the authorities doing allowing houses to be built anywhere east of Christchurch. Of course, nothing is that easy – they’ve been building here for years, although more so recently, and sprawling out to the east into the cheap land – just as Hugh Pavletich from Demographia would have them do. Hmmm, cheap land Hugh – that was a great decision really, wasn’t it? In hindsight, I’m sure even he would say No.

We could tie all that into Len Ring’s theories on the effect of the moon on gravitational fields – his theory being that the extra pull of gravity when the moon is aligned means that earthquakes happen when the tide is high or low, and hence forces on the earth’s crust are pulling the hardest. I had a good look at Ring’s website the other day – as did, probably, many people following John Campbell’s TV3 meltdown – and it seems to this little fish that Ring’s theories are just as fishy as ever. Yes, I get that the moon affects the tides of water sloshing around the globe – but the net effect of an extra metre of water on the earth’s crust, would seem logically to make little difference.

Ring says the moon’s gravitational field also affects the liquid magma sloshing around under the earth as well, and that from 50km deep, magma is pushing up in an effort to tide itself to the moon as well. Sorry, but I really can’t buy that one. According to Ring, it is not the faultlines that cause the earthquakes, but that the earthquakes cause the faultlines – and the tides and the magma help cause the earthquakes. Sounds very much like pseudo-claptrap to me, rather than pseudo science. Seeing as we have tides right around the whole of the country, as we do right around the world, I’m not sure how he extrapolates that into predicting earthquakes in Canterbury…

Anyway, if you’re interested, here’s his predictions for the next few months worth of earthquakes.