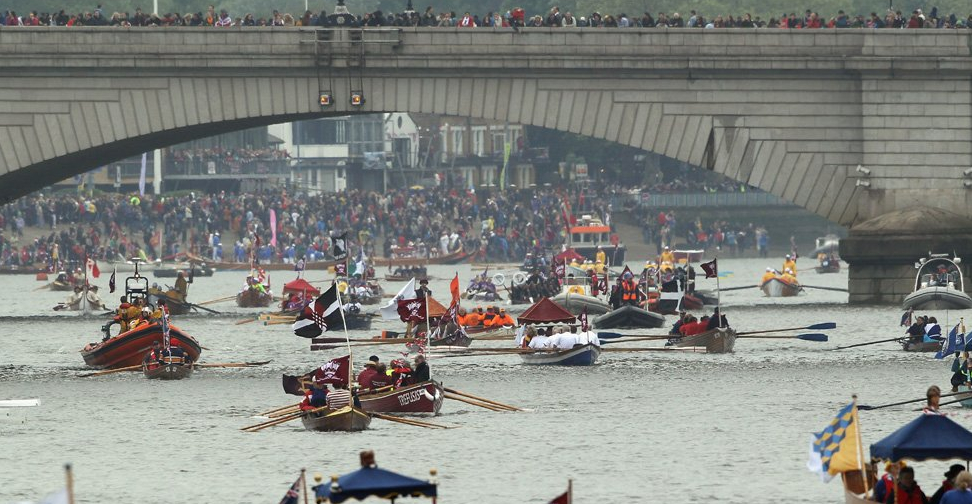 It’s time like these, in the dead of winter, that I wish I was back in England. No – not for the weather – by all accounts we are having better weather in NZ today than Britain had over the weekend, but because of the shear sense of fun. Or should that be sheer? One is a pair of clippers, the other is a see through negligee: neither seems quite appropriate. Hmmm. But right now, I want to indulge in the magnificent silliness that is the right Royal Knees Up known as the Diamond Jubilee.

Sixty years seems to be an awfully long time to be doing anything, and even more so if it is a job and lifestyle combined – but good on her Majesty for having the stickability for the last six decades. Not that she has any choice about it really – knowing that if she was to back out, like her miserable uncle did, she’d be royally poo-poohed, and probably the world would end – for those that live in Britain at any rate. But, I dunno, this surely must be the last decade, no? And then the whole ghastly business of trying to convince Charles that he should quietly pass up on the job he has been practicing for all his life, in order to – to what? To allow his nice but dim son to set the tabloids alight for a few more years? There was a time of course, when Charles was seen as a sexy beast (an elderly relative of mine had a poster of him on her wall, in the manner normally reserved for the Bay City Rollers), and similarly there are those that still get excited by the looks of big Willy Windsor (as opposed to the really more favoured royal appendage being his wife’s sister’s derriere). Really – if they wanted to put an arse into the monarchy it would have to be Pippa’s, rather than Camilla – but, oh goodness, I really am digressing away from the point of this blog – urban commentary in Wellington.

Hmmm. How do I get back on topic? Well, in the meantime, here’s some nice pictures of a lot of boats. Maybe that’s HMS Wellington anchored there?

Ooooh, and look, here’s a royal whaka! Hooray – they did get in after all!

Let’s leave this happily little global family with one last picture – her Madge, with her two boys – old and young.

Hooray! God Save the Queen! Hold on a tic. What’s that they’re wearing? Both Charles and Phillip: we know Prince Phillip has a NZ gong of the highest order – cos he got it today – and there it is, looking lovely, like a little flower, in lead place on the brag swag of jewellery, with a tiny tukutuku panel zig-zagging down the ribbon. That black, whate and red can only be from NZ, surely?

But did you know that Charles appears to have a matching one as well? Really? Yes: look. Future King of New Zealand right there?

Actually, I’m wrong. Although that is from the Order of New Zealand, their matching pair appears to be only a NZ Queens Service Medal. Nice, but not the full monty. So – better make room for one more Your Highness!