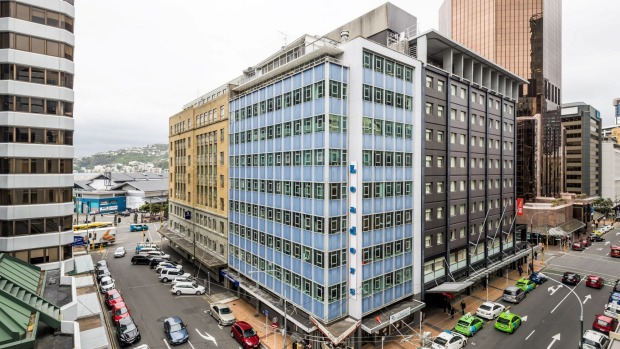 Keep an eye on this

As summer continues it’s blazing trail across the Wellington region, this blog site has been a bit sleepy too – but got woken up with a jolt recently, as a direct challenge was fired across the bows of the architectural profession. From a headline in the NBR, and Dom Post, an article caught my fish eye: “Blame the architects for the building my company is about to destroy”.

Provocative, no? The author, Robert Jones, a long time professional property developer, has, through his property company, bought a building on a prime Wellington corner site. Nothing unusual there: Sir Robert’s company has bought many buildings (16 in total) on Wellington corner sites. Always corner sites – Bob doesn’t believe in any other sites. You’re a mug if you buy a building hemmed in on either side, apparently, and he is right – a corner site has two street frontages, and reasonably unlimited access to sunlight. Plus, people love corner offices, and will pay higher rents. It all makes sense.

The building, described as the Leaders building (formerly Sun Alliance), sits on the corner of Featherstone St and Brandon St, and sits on a 333 m2 Wellington City Council leasehold site and includes eight office floors – about 260 m2 each, ground floor retail space, and a rooftop apartment. It is not included in David Kernohan’s book on “Wellington’s New Buildings” (now very out of date), and so I have very little info at hand about the building, although I have always A) admired the proportions (a frame makes the building look taller than it is) and B) thought the ground floor layout was shockingly bad. Who was the architect and engineer? It looks like a late 1950s / early 1960s effort. Structon perhaps?

But Robert Jones Holdings Ltd is also doing something quite unusual: as Sir Robert says when he got the hyperbolic press release that he was going to “take the building to a new level”, he replied – “We will indeed be taking it to a new level, specifically ground level.” So, they’re apparently going to demolish and rebuild, despite this going against what Sir Robert has said many times: that property developers are mugs, and that he (and his company) is not a property developer, but just a property investor (buy, don’t sell, and hold on to the damned thing and its cash flow for years) – reference Jones on Property etc. Let other people (mugs) develop the buildings and take the losses, he just wants to buy and hold. So why has he decided to break the rule of a lifetime – to redevelop?

In his own words: “Iâ€™m on record for claiming, as borne out by the world-wide record, that all property developers ultimately go broke, which is why we are permanent investors and not developers. That said we annually spend tens of millions of dollars on what can simply be summed up as correcting architectsâ€™ design errors. Weâ€™ve had enough.
This relatively modern building which we will destroy is typical. A perfect oblong site on a prime corner with a lengthy north facing facades, itâ€™s the standard architectural disgrace. The foyer and thus lifts, instead of being in the middle, are at one end, thereâ€™s a ridiculously poorly engineered row of columns down the middle, the windows are tiny, the lifting poor; I could go on but you get the picture. So for our own satisfaction we shall build the perfect building. I refer of course to function and not aesthetics.” (NBR).

Hmmmm. So it will be the perfect functional building, but will not be overly concerned with perfect aesthetics? That implies to me that it stands a good chance of being butt-ugly, unless you believe the old modernist maxim that form follows function and that aesthetics will just follow that form naturally leading to perfect beauty. Wellington’s largely crap aesthetics of most of its commercial buildings would seem to negate this theory.

“Thus, this site provides an excellent opportunity on a small scale to erect a new structure and demonstrate correct office building design principles, which we shall do.” (Dom Post).

Sir Robert claims that there “are many excellent residential architects in this country as evidenced everywhere but the commercial lot are a disgrace.” This he should know well – he seems to have worked with, and dispensed with, most of the commercial architects in town. There are many stories about the joys of working with Sir Robert, none of which are repeatable in a public forum such as this, but his love for architects and their work is evidenced by this other quote:
“by God my first duty, and duty it would indeed be, would be a mass public hanging of the architects responsible for the majority (not all) of our CBD buildings. It would not only be a great family day outing but highly educational for youngsters in demonstrating the consequences of unthinking ineptitude.” (NBR).

Of course, as most of the buildings in the CBD were designed 50 years ago, most of the architects are probably already gone, although not by public hanging. Still, there are plenty of younger architects for Sir Bob to string up, along with his usual dislike of women, council inspectors, lesbians, beggars, fat people, people wearing sunglasses on their foreheads, and probably especially fat lesbian council inspectors with sunglasses worn incorrectly. You have been warned.

So in the interests of this highly educational opportunity, we will be watching closely to see what Robert Jones Holdings Ltd does with this site (i.e. presumably apply for Resource Consent to demolish), and rebuild (i.e. presumably apply to build a largely glazed, column-free building with central core, and lots of lifts (i.e. 3 or 4 rather than 2). The “perfect building”, designed without architects. Good luck with that Bob! Perhaps designed just by services engineers then, to entail a perfectly engineered and well-serviced structure?

Comments welcome as always, although keep it strictly factual, as Sir Robert is prone to suing over any inaccuracies and misinformation, so keep it seemly.