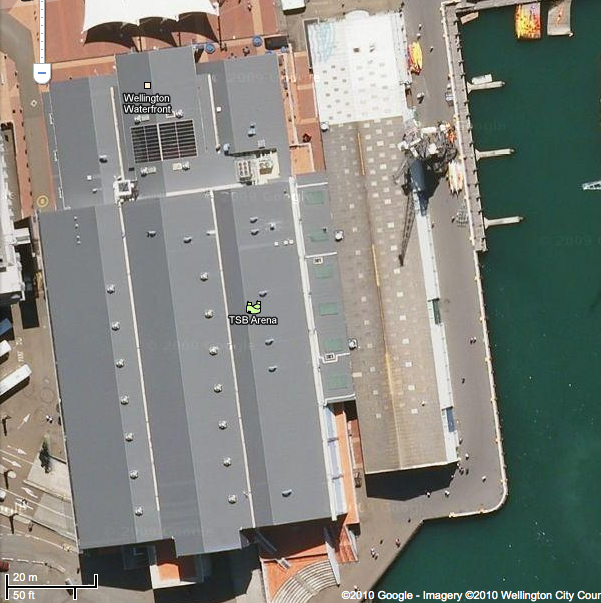 In the interests of being a good citizen, and supporting the search for another possible site for the TSB Arena should it chose to relocate away from it’s foreshore-grabbing frontline position (surely the most pointless place for a ‘black box’ to be), I thought it may be useful to research some other sites around town that have been mooted. All the images have been sourced from googlemaps, and all are at exactly the same scale and same orientation – so you can see how they compare. Hold on a tick, I’ll load them up:
Here’s the original, for starters: the TSB Arena, from above.

Next up is the concourse in front of the Westpac Stadium, or Caketin:

We can see that the areas are about the same size really. So, not that much extra room there – a bit longer, but thinner. There are issues to deal with, including getting people out of one stadium, and safely away from the exits – but this could be simply dealt with in the design phase.

How about we compare that with the site of the new Indoor Arena at Cobham Drive – no earthworks showing on Google yet, but looking great on site:

OK, we can see here how much larger the Cobham site is. The new Indoor Stadium there is going to be massive in size, as this photo is only really a corner of the whole site.

What about the Centreport land, and that bloody ugly log storage area that is such a waste of foreshore? Here it is – or, just a small corner of it:

Safe to say there is a whole lot of room there, should anyone want to build there. And surely a far better solution than piling up raw, unprocessed logs, shipping off our best assets.

Another suggestion from one of our readers was well away from the waterfront, at the Newtown old showgrounds. That seems like a good option, and their site out the back looks like this:

Large, flat, under-utilised area, on main traffic route. Seems like it could do with a new life. This surely has to be a strong contender for under-utilised site of the year. But: it is in Newtown. Hmmmm.

What else? How does the site compare with the Michael Fowler Centre? What sort of size are we really looking at:

That shows that actually the Fowlhouse is quite compact really. Well designed, no doubt. And, evidently, undersized for a decent mid-sized rock concert, as it must hold less than the TSB Arena.

And here, compared in size to the hallowed green turf of the Phoenix and the Hurricanes, being used for cricket in this photo:

There are other options for a new site, of course, with land currently sitting empty, such as at the proposed new super-sized Super markets, in John St:

There’s loads of room there – do we really need it filled with vegetables? (and no, I don’t mean the people of Newtown). If someone could solve the traffic issues, and get some decent public transport flowing there, that site could be put to great use as a Convention Centre.

The other supermarket site is of course at the Basin Reserve, where it will just clog up the traffic:

Very silly place for a supermarket, in my humble opinion. You’ll need a flyover to sort out that mess…. So, I guess not that good a place for an Indoor Stadium either then !

Where else? Well, there is the Railway yards, but to be honest, those boys down at the railways don’t like anybody else playing with their trainset:

But this was a serious and well thought out suggestion from one of our regular readers – Erentz – who has it all worked out. Read his comment here.

There is another place though, that sings out for redevelopment to me. Currently split in two by one of our main roads, the sites have been sitting empty for years. Even car yards have deserted them. Probably destined to be more upmarket, skyline-blocking and view-hogging apartments for those that can afford them – at least until the whole apartment market went tits-up and the land is just sitting there vacant. What about building on this site – both sides of the road – even over the road – and linking it together with connections to both Te Papa and to Courtenay Place? Yes, I’m talking about the land between Wakefield and Cable, around the back of Readings Cinemas at Courtenay Central. Surely that is a choice place for a new Indoor Stadium and Convention Centre?

Post-script: Here is the Vector Arena in Auckland, at the same scale, as a way of comparison: