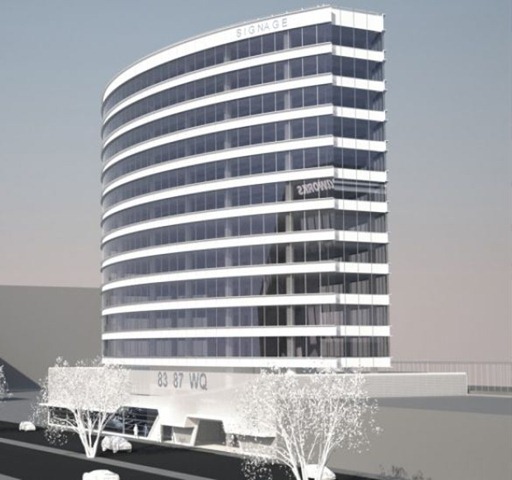 Last week, was of course, the unveiling of the iPad, Apple’s biennale Next Big Thing.

However, on a more local note, last week also featured another product launch: the iLoft, or 85 Waterloo Quay. Normally a property development isn’t pitched as a ‘product’, but in this case the cue comes straight from the developers themselves. Their promotional effort is certainly prolific, boasting not one, but two websites, a twitter account, and a (now defunct) webinar.

For all its enthusiasm, the general voice of their marketing appears ill-considered. As with Apple, their choice of name suggests either naive ignorance, or an arrogant attempt to generate buzz. Given the gaudy slogans and colours spread across the iLoft promotions, Conrad Properties seems to have gone for the former.

If you can get past the absurdity of labeling a building with a prefix popularised by consumer electronics, iLoft serves as a decent description of the building and its inhabitants. The development features 288 units, with the majority being approxmimately 41m2. This size — and the i —indicate the target market: the young professional.

Each of these units is distributed across two levels. The architects — ArcHaus — used a similar loft layout in their design for Tattoo, and its good to see this approached repeated.

The Archaus website reveals something of an interesting history to the building. Initially designed to be office space, the development has since been adapted into a residential apartment block. Given the recent glut in the commercial marketing, this move isn’t so suprising,  and is doubtless a cheaper option for the developer than redesigning from scratch.

In terms of the design, this change from commercial to residential explains the somewhat atypical move of placing apartments within a curved building profile. As an open plan office, the shape of the exterior matters relatively little; cubicles and partitions can be reshuffled to accomodate all variety of arrangemenets. However, when trying to fit residential apartments into such a space, the (re)arrangements have produced somewhat interesting results. Shrinking and shifting the building’s core to the center has created a double-height atrium area on each floor that curves into a point at either end. Meanwhile, the curvature of the facade means that each of the apartments tapers slightly as it approaches the facade, so the apartments end up being slightly trapezoidal.

Moving outside, the exterior is a bland curtain wall, made slightly more elegant by the slow curve that spans both sides of the building.

The rendering on the right shows that the ribbons between each floor have a kind of double border; appearing almost like curved i-beams that wrap around the facade.

Down at ground floor there is a glazed street face, presumably for commercial tennants. Diagonal arches interupt the car-park masking screen, echoing some of the design elements proposed for Due Pension. Its a shame that the curves of the upper floors couldnt be continued at street level, and as a result two parts of the building seem distinct and unrelated.

Hat tips to Mark and SkyscraperCity for bringing iLoft to our attention.

The Eye is undergoing something of a redesign at the moment. A lot has changed already, but a few more features and tweaks will be added over the next week or so. Overall, we’re looking to make the comments system more flexible and engaging, as well as add some more location-based features to tie posts more directly to the places they mentioned. Feedback would be much appreciated.