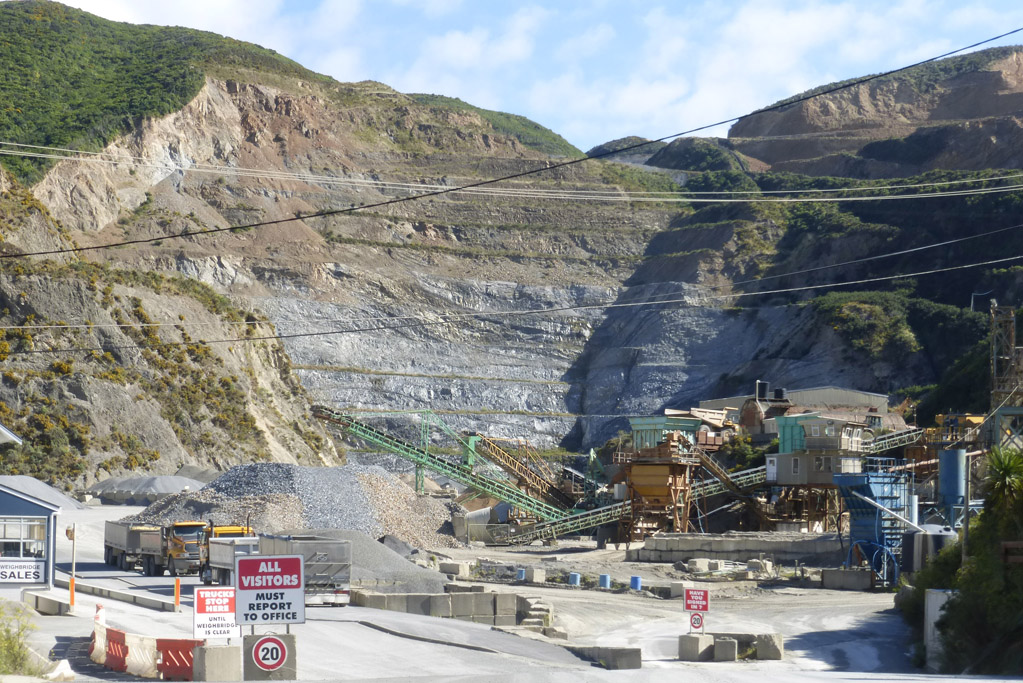 I met a bloke in a pub a few weeks ago, who to my amazement said that he came from Horokiwi. I confess, that as I am a stupid young thing, and did not know it to be more than a quarry, I teased him about being born under a rock. He took it good naturedly, and fortunately did not hit me – no one wants to pick on a Fish, after all, even a geographically confused Fish with no idea where Horokiwi is.

To cut a long story short, I now find that Horokiwi is in the news, both on this website and elsewhere. Indeed, NZTA have proposed to build a road through there, not just for the hell of it, but because they, like any good chicken, want to get to the other side. So, like any good investigative journalist, I went to do some research, and drove to Horokiwi. The sign, that i have often seen from the Hutt Road / motorway, points not just to a quarry, but – blow me down with a feather – what a magnificent quarry it is too.

It strikes me that if NZTA had been clever, and planned coherently for the future, they could have had their road dug for free by the Quarrymen (no, not John and the gang for those of you who are sharp today, but the men who run the Quarry). I presume it is run by men – no Howard Roark figures visible when i took the Fishmobile for a run, but it’s pretty awesome heroic stuff indeed anyway.

The current road, which is honestly little more than a goat track, is obviously not suitable for any seriously large amounts of traffic – in fact, it rivals Takapu Valley for its cuteness and narrowness in many parts, and as summer swings into autumn (as it seemed to do so today), then so to the conversation focuses on the road that is proposed to connect Petone with Tawa, possibly via Takapu.

Once you’re out of the quarry, and have climbed up the steep hill, past the sign that warns you you are being watched (there is, after all, only one way in and out at present), past the other, much more welcoming sign – a blackboard – cute!

…and then you get to the top and – what a heavenly view. No wonder the locals have been keeping it a secret.

There’s views down to the harbour mouth in one direction, to the Meridian West Wind windfarm in the other, across to Tawa in the middle, Porirua away on the right, and across to Te Wai Pounamou at the back, with of course a view down to Takapu Valley somewhere in the foreground. Hold on, I’ll zoom in closer for you:

That’s an extreme telephoto shot of the lighthouses at Pencarrow, with a giant red transmitter pole in the way. Mount Kaukau?

And here’s the middle ground – is that Tawa in the foreground, and is that Churton Park in the background?

Whilst over here on the right, there is virtually nothing at all, apart from rolling hillside. And a strange start of a creeping cancer of suburbia rearing its ugly head…

I was actually so blown away by the view that i took loads of photos and then my battery ran out, so didn’t get to photograph what I had gone there for, whatever that was. And, I have no answers as to where the proposed road should go, to “short-cut” across the countryside from Petone to Tawa / Porirua, except to say that when I came back, southwards to Wellington on the Hutt Road, it took next to no time to get to Ngauranga on a nice flat road, and then up the well-maintained Ngauranga Gorge road. I have to say, I agree with Sav, and there seems to be absolutely no need for a link road at all…

Postscript:
Further to discussions with 60mPa below, i’ve added in two link shots, just to pick up how close the two sides actually are.
Notice to NZTA: just use the Lincolnshire Drive roads! Saves lots of dosh!