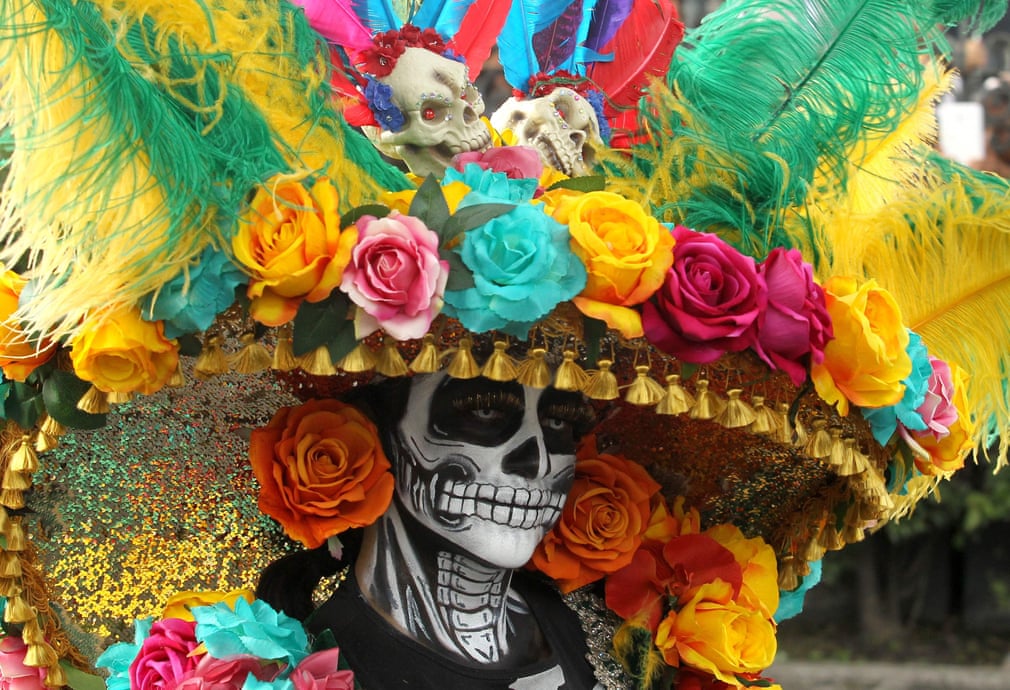 Halloween: All Hallows: The Day of the Dead.
What better way to spend the end of October than to celebrate the End of Life?

Although it seems wrong to my stiff anglo-saxon heritage, to celebrate death, it makes a lot of sense really. Its the most natural thing in the world, and the only certain one – even more so than taxes – we all gonna die sometime. As the man said: you’re a long time dead. In fact, we’re all gonna be dead for far longer than we’re ever gonna be alive – even the Bristle-cone pine trees in the Rocky mountains, the longest living things ever found at 3500 years old, will be dead one day, although it appears that no one has told them that yet.

We’re sad that a plane crashes killing all on board, or that a helicopter crashes, wiping out a family legacy and a fair chunk of DoC expertise, but we’ve all got to go some time. Why not celebrate that? The Mexican cult of Las Dias del Morte, pictured above, has a parade. In a case of art imitating life, the parade above is only the third year it has happened – the first was staged for the last James Bond film, and it was so popular that now they have it every year. James Bond is also on its last legs, so there is a nice circular logic going on there. But celebrate they do: skulls, skeletons, flowers, music, passion and life.

We have a slightly perverted view of that in the anglo american culture we live in the side of. While the Brits may sometimes still cling to the idea of All Hallows, an idea so old that it even precedes Harry Potter, the Americans have, of course, perverted it full. Over there entire costume shops are filled with plastic packs of costumes (because of course, that’s what the living do: consume! Consume with a vengeance because there are no shops in hell!) so you buy a Witch costume, or Sexy Witch costume, or… you get my drift.

There are literally Hundreds of Sexy Witch variations – so I thought I’d try to balance out this by having a Sexy Wizard costume pic as well – no such luck. It morphs into Sexy Hogwarts Wizard costumes (Gryffindor scarf and not much else) or Sexy Wizard of Oz costume (ummm, you should google that yourself).

So – anyway – let’s forget America (I wish!) and their sexual predilections (I like beer! make me a Judge too!) and just celebrate the day that all the dead walk the streets again. Seeing as I am flying to Auckland and back today, in the middle of a large storm, wish me luck, and I’ll see you on the other side…