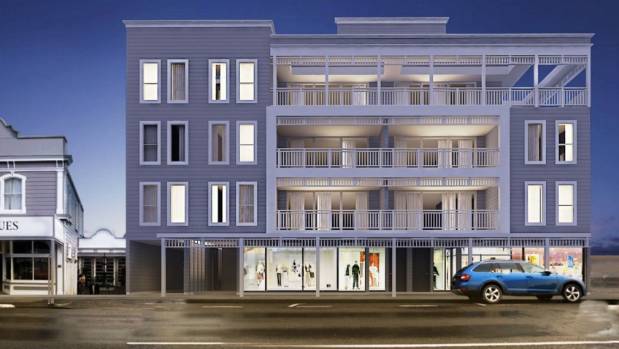 There are several topics we’re keen to explore in the news right now, including that motorway bridge in Genoa, historic buildings in Whanganui, and more on the subject of buses etc in Wellington, but right now there is one pressing subject: what should Greytown do?

Predictably, there is quite a Clash over the subject, and battle-lines are being drawn up. Greytown is by far the most picturesque of all the towns in the Wairarapa, besting even the cute little Martinborough and streets ahead of Masterton which always just makes me want to drive on through faster. A large part of Greytown’s appeal is the consistently heritage architecture present in the town – you probably knew this, but I didn’t until relatively recently – it’s not all original. That is, while it is original heritage, it is heritage that wasn’t originally there. Or reusing old bank buildings for different uses.

At some stage in the recent past (the 1970s?) Greytown started collecting nearby town’s old buildings as they were being removed, and re-siting them in the main street. So now the town has a wonderfully eclectic mix of old, while other towns nearby have a nasty bland mix of modern. Nothing quite matches. There’s weatherboard, there’s crinkly tin, there are parapets galore and there is heritage character in every detail, setting the town alight.

And then they have the odd proposal like this:

That’s undeniably a modern building. The architect hasn’t been identified in the news so far – whoever it is, they’ve tried to disguise its bulk by visually breaking it down into two pretend small buildings connected by external balconies, styled to look a bit like everyone’s favourite White Swan hotel.

The proposed apartment block is, quite possibly, the first example of a previously unheard-of genre: the Wairarapa Wonder, the rumble in the jungle, the tallest of them all: a “skyscraper”. This proposal makes it even more obvious by being situated next to what looks like one of the smallest and cutest buildings in town – the tiny little Wild West style facade with the swoopy facade:

And the proximity absolutely ruins everything. There’s what looks like an urban style entry to a carpark, right off the main street, right next to the old swoopy cutey. There’s clearly a lift tower and stairwell rising up in the background (which no one will see from the main street of course), but still: the first elevator in Hicktown – whatever should they do? Is the building too tall? Or is it just too dull?

The answer, to me, is quite simple. The building should not go ahead in its present form. With its present architects. As advised by its present planner, working to the present planning rules. Quite clearly there is a height limit, possibly of about 12m, and the architect and planner have agreed to keep within that. The form of the building, by want of being a series of apartments, is predominantly horizontal. The roofline is also horizontal. There’s a smidgeon of parapet left standing above, but this is not a piece of urban infill that fools the tourists – it’s all too much same-same. The stories above are not connected to the ground floor in any coherent manner. The building, to me, is too horizontal. I’m left…. unimpressed. But that’s just me. What do you think? What does Greytown think?