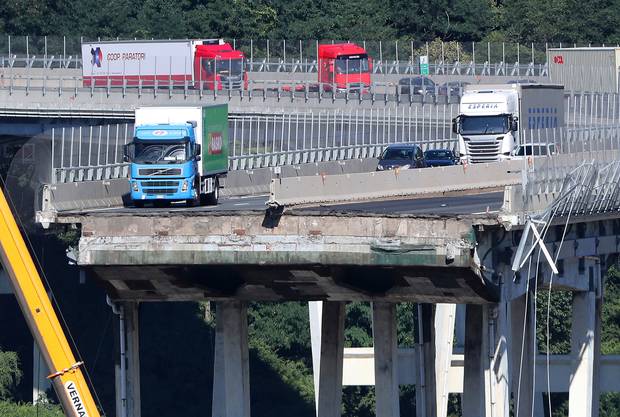 Amidst the tragedy of the collapsed autostrada in Genoa, and despite the death and destruction beset upon that city, there are still some interesting things to observe from this horror story. I hope it is not too distasteful to write about this while they are still pulling bodies out of the wreckage, but really: does anyone else think it is strange that there is so little steel reinforcing in the photos we’re seeing of the wreckage? 60mPa? Ali Cat? Is it just me, or is it not extraordinary that there are reports that an architect designed the bridge, which implies that an engineer had nothing to do with it? And does anyone else find it bizarre that the bridge was flying along 60m above the town in the first place? Who is pointing fingers at who?

I’ve always had a small crush on Genoa, having gone there a few years ago, and enjoyed the amenities of a once proud city, one of the original centres of hundreds of years of Mediterranean rule, before getting superseded into the dustbins of history. Fantastic buildings. Amazing history. Incredible basil pesto. Sumptuous food and wine. Creaking infrastructure. Indeed, one of the features of the city is indeed the sopraelevata autostrada that ruins the view from just about everywhere. It is as if the motorway that we have carefully tucked away down the back of the Terrace was instead built at high level along their waterfront, about 3-4 floors up. Much the same as the Basin Bridge would have been if that monstrosity was allowed to be built. The sopraelevata autostrada cuts right across the heart of the town, and there were plans to stop it one day and force a diversion. Perhaps a bypass. Reclaim the streets! But all too late now.

No one these days ever wants a highway through their property, let alone a superhighway barrelling along 100 feet above your head, so I really can’t imagine how it ever got permission to be built – especially back in the 1960s when there was so much less traffic. And certainly a lot less trucks on the road – one lucky trucker in the picture above, closing to stop just in time.

The thing with this highway, the A10 or whatever it is – it’s now redundant. It will take years to rebuild that lost span – and in the mean time the traffic has to get off the entire bridge from start to finish, and find a new route through the town. In fact – its been 2 days already – I’m sure they already have found an alternative route. So why rebuild it? Why not just tear the entire structure down now? After all, it’s clear that the entire structure has a very worrying potentially catastrophic fault built into it…. Some people say we should not be speculating already, but that’s what we humans do best. From the Guardian:
“Prof Gordon Masterton, the chair of future infrastructure at the University of Edinburghâ€™s school of engineering, said there needed to be a â€œforensic and thoroughâ€ investigation to get to the root cause.
â€œThere are several potential triggers for what appears to have happened and until more evidence is obtained from the debris, the eyewitness accounts and the videos, it is unproductive and disrespectful to speculate as to whether one is more likely than the others,â€

But let’s speculate wildly anyway. Let’s start at the start – the tragic video of the storm hitting the bridge, and the moment of collapse being caught on tape, with the over-arching voice saying “Oh Dio, oh Dio, oh Dio”. My God indeed – and yet, if you watch the video hard through the mist and driving rain, you can see that one half of the pylon falls east, the other half then falls away to the west. The inbuilt fatal error is exposed right there – there is no redundancy built into this structure – there are only two support “cables” holding up the bridge each side of the pylon – and if one of these goes, the other side cannot possibly hold the bridge, and disaster from that moment is guaranteed.

So in a way, it does not matter if the cause was maintenance, act of God, or a lightning bolt, the end result will always end the same way – total carnage. Oh yes, it is easy to be wise after the event – but there is no way anyone should trust any of those other bridge spans now… And to think that my bus went over and under that bridge when I flew into that sweet ancient old town.

But amidst the photos of the carnage shown here, it is the lack of steel reinforcing that I notice most. Any structure built in the 1970s by the Ministry of Works would be fair bristling with steel rebar, inevitably with the concrete finish as bush-hammered concrete, as hard as flint and twice as tough. But look amongst these photos and observe how the concrete is unreinforced, and has cleanly cleaved along certain lines.

Yes, the Mafia will have been involved, that goes without saying in Italy when it comes to construction contracts this size. Did they skimp on the expensive metal stuff? Are they the real ones to blame? Or is it as the professor of engineering said – that it was the fault of the architect – as it so proudly stated on the front cover of the Dom Post, who I’m not entirely sure whether they would know the difference between an architect and an engineer. The designer of the bridge was, of course, an engineer, not an architect. In fact, Riccardo Morandi was the Professore of Bridges at both the University of Florence and the University of Rome.

“The huge Morandi Bridge, spanning the gorge where the port of Genoa sits amidst coastal mountains, was built in the 1960s to a bold plan by Italian civil engineer Riccardo Morandi.” says Stuff.

I don’t know if we will ever find the real cause of the collapse – the smoking gun, so to speak. Clearly something caused one of the stays to snap or sever – perhaps, in that wild storm, a car or truck or even lightning bolt crashed into one of the pintels or gudgeons, and it all just unravelled from there. There are also suggestions that there was work being done on the foundations of the giant pylons, but that seems doubtful that this would have caused the collapse – after all, in the Dio video we can see the pylons collapsing after, not before.

It is also pretty amazing that the great central pylons could have collapsed as well – the bridge falling down is one thing, but for the pylon to collapse suggests enormous pressures uncalculated for. My surmisal would be that this again puts the torsion into the structure, from a presumed one cable suspension side going before the other.

The other thing to notice, in one of these pictures, is that the steelwork appears like a thin elongated sheath to the outside of the columns, while lightweight hollow terracotta blocks have been used in the centre of the column, in an effort to reduce weight. Is this correct?

Meanwhile, Wikipedia notes that:
“The bridge has been subject to almost continual restoration work since the 1970s due to an incorrect assessment of the effects of viscosity of the concrete in the bridge’s design. This oversight resulted in excessive deferred displacement of the vehicle deck so that it was neither level nor horizontal; at the worst points, it undulated in all three dimensions. Only after continual measurement, redesign and associated structural works was the vehicle deck considered acceptable, approaching horizontal by the mid-1980s.”