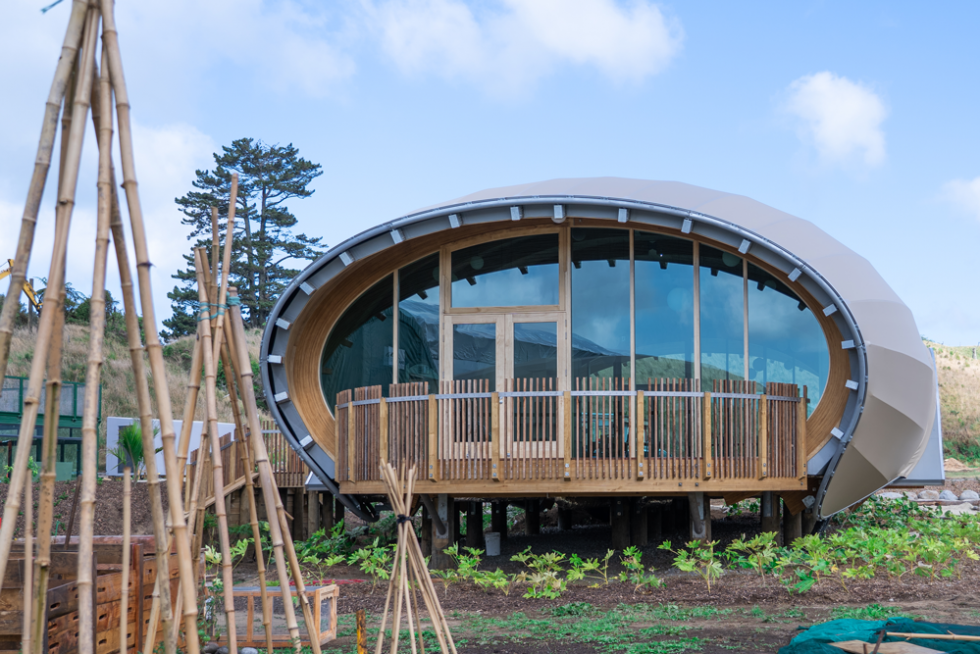 There’s a lot hanging onto the proposed extension to the Taranaki “Green School” at present, including the job of the Greens Co-Leader James Shaw, the future of the Green Party itself, the resulting possible coalition Government of Labour / Greens / NZ First, and heck, that could even possibly lead to the re-emergence of National under Crusher Collins. Yikes! And all because Shaw was silly enough to agree to fund $11.7million to a small elitist school of students with rich parents who want their children to be taught in a bubble with curved timber walls.

“Green School New Zealand is thrilled to have recently been announced as a recipient of the Government’s “Shovel Ready” project that will not only support the school’s expansion, but add to the growth and development of Taranaki. Green School New Zealand is to be supported with $11.7 million, 100 per cent of which will go towards the construction of the school’s campus expansion. In doing so, the school will be creating more than 200 local construction jobs, as well as being able to expand its roll to 250 students. The increased roll is estimated to make an annual contribution of $43 million to the local economy. Green School CEO, Chris Edwards, said he wished to sincerely thank Associate Minister of Finance, James Shaw, for his support of the Green School project.”

“The Green School philosophy is about connecting with and supporting our local community. This funding – for which we are profoundly grateful – not only allows us to add to the livelihoods of many in our community through job creation, but in attracting new families to the school, it will continue to allow Taranaki to flourish as a thriving economy.”

But there is something else that the main-stream press are missing here – and I’m sure the eagle-eyed readers of the Eye of the Fish have already spotted the real news story amongst this.

Yes, of course, the truely criminal part of this story is that a parent of one of the children of the Green School, Christof Melchizedek, calls himself an architect. A New Age Architect. Christof and his partner Alaya hosted a fundraising event at the school – a “lion’s gate abundance and manifestation ceremony” including “bio-energy field cleaning” and “DNA activation”.

“We’re going to be laying down a crystal bed. Everyone will be bringing crystals from all around the world. We are going to be unifying them and bringing in this 5th dimensional consciousness,” Christof Melchizedek explained in a video.

Now that may just sound like standard whacko new age bullshit to you, brought to the world by well-meaning but wooly-headed advocates of humming and stretching and charging you a fortune to do so in a bio-friendly way (no doubt involving breathing in the purifying energy of the world’s pure air, like we all do), but what really bugs me is that he describes himself in the video as Navigator. Architect. Guardian. Accelerated Spiritual Evolution in Service of the Divine Plan.

That’s truly shocking. Does he have any right to call himself those things? Who or what is he the Guardian of? Where and how has he Navigated to or from? And what right does he have to call himself an Architect? As we all know, only people who are Registered Architects have the right to call themselves an Architect – and anyone who is calling themselves an Architect while they are not, can be taken to Court and prosecuted by the NZRAB. And why not? Why not right now? What time could be better? After all, the School now has $11million to pay the Court Costs and damages !

No doubt Christof (sounding suspiciously like he is trying to channel the Second Coming of Christ) will claim that he is just a Guardian of our souls on their passage from the crystal-clad slopes of Mount Taranaki to the pearly gates above, or that he Navigates us along the Journey of Life as he carefully removes such base worldly belongings such as cash from our pockets, especially if they are bulging uncomfortably from our pockets when we go to sit cross-legged on the cushions made from Himalyan mountain goats scrotums, carefully washed in organic pear-tree liquid coaxed from the fruit by the voices of 50 vestal virgins singing the Hare Krishna Hallelujah chorus whilst in a transcendental trance on their Astral travel. And that’s all fair enough by me.

But he can’t call himself an Architect. He is NOT on the Register – I know – I’ve checked. What does he know of E2 and water-tight claddings? How well versed is he on Resource Consent applications and the vagaries of answering Council RFIs? Has he done an H1 calculation or an E2 Risk Matrix lately? Perhaps a Risk Matrix should have been used by Minister (ex-Minister?) Shaw, before saying yes to the School. Hmmmm.

However – that’s all a bit unfair, and I’m going to quite rightly dismiss my concerns as scaremongering and falling into the same trap that the rest of the media has done. The Mayor of Taranaki says that it is fine, and quotes a number of other projects with similar costs. The real architects of the buildings are of course BOON (Team Architects), who explain their curvaceous architectural design as:

The Green School campus is a collaborative design developed by international and local designers, architects and engineers.

It has been designed from the most organic materials available, in order to function sustainably, and provide students with a shelter nestled amongst nature where they can have a safe and comfortable environment to learn and focus.

Curved shapes are predominant in the architecture to create an atmosphere that supports alternative thinking.

Our learning pods and combined areas are built with the lightest of touches and surrounded by native plants in what is an inspirational environment for our students to think openly and creatively, while enjoying all aspects of the exquisite outdoor setting on our doorstep.