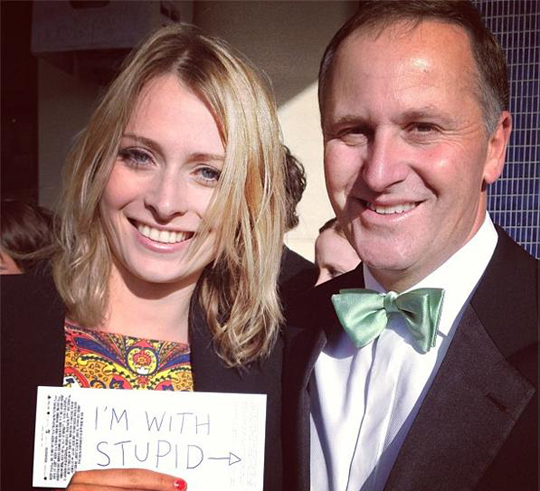 Since Johnkey’s stupid comments the other day about Wellington dying, there has been a predictable uproar and outpouring of denial from all of us proud Wellingtonians. Without doubt, if he meant to stir us into action, he has succeeded. Also without doubt, he has no endeared himself to anyone in this town – if chef’s didn’t spit in his soup before, I’m sure they will now.

Then today, chief of everything, Mr Joyce announces that Celia Wade-Brown is the root of all problems and that if only “she and her silly council” (words to that effect) would support more roads, then everything would be rosy. In reply to all this, it seems that WCC has decided the way out of this imbroglio is to Brand its way out.

Roads improve productivity, a little, and improve the bank balance of companies with large road moving machinery – but that’s about all. Branding improves Saatchi’s bank balance quite a bit, but does nothing really. Construction, on the other hand, affects a wide range of industries and workers, and is an area well worth investing in.

Wellington has an issue, not so much with lack of Government confidence in its Mayor (although that is a concern that it is stated so openly), but to me, the greatest issue is the stock of existing central city buildings. It’s a fair cop, Guv – you’ve got us bang to rights – we do have a problem with existing buildings not being seismically up to snuff, as well as the old chestnut of us sitting on the biggest potential earthquake hazard this side of the San Andreas fault. If we knew the Big ‘Un would be arriving tomorrow, we’d all happily decamp up to the Wairarapa for the next week, until it was all over. Except of course, that the Wairarapa is just as bad really. Actually, probably the safest nearby place is Nelson, but that’s not going to be an easy exodus. We all know, deep in our hearts, or perhaps in a lot shallower place – like at the front of our nose – that if an earthquake comes it will wipe out the city.

But what if we were to put two and two together, and come up, not with four or five, but instead a perfect ten? What if we were to use our currently sitting idle construction industry, and get them to work to quake-safe our homes? What if we were to be determined that an earthquake of magnitude 8.0 will not wipe us out, but that we would sit here happily, ride it out, shrug it off, sing Hallelujah, and then get back to work? How would that feel? How secure and happy would we be then? Is that just a pipe dream – or is that achievable?

Of course, it is. Tokyo has had that attitude for quite some time. Japan has long since been prepared for both earthquakes and tsunami – evidence being that they even named the word themselves. New Zealand, and quite specifically Wellington, is gloriously unprepared, and at present is just relying on the time honoured tradition of sticking heads in sand.