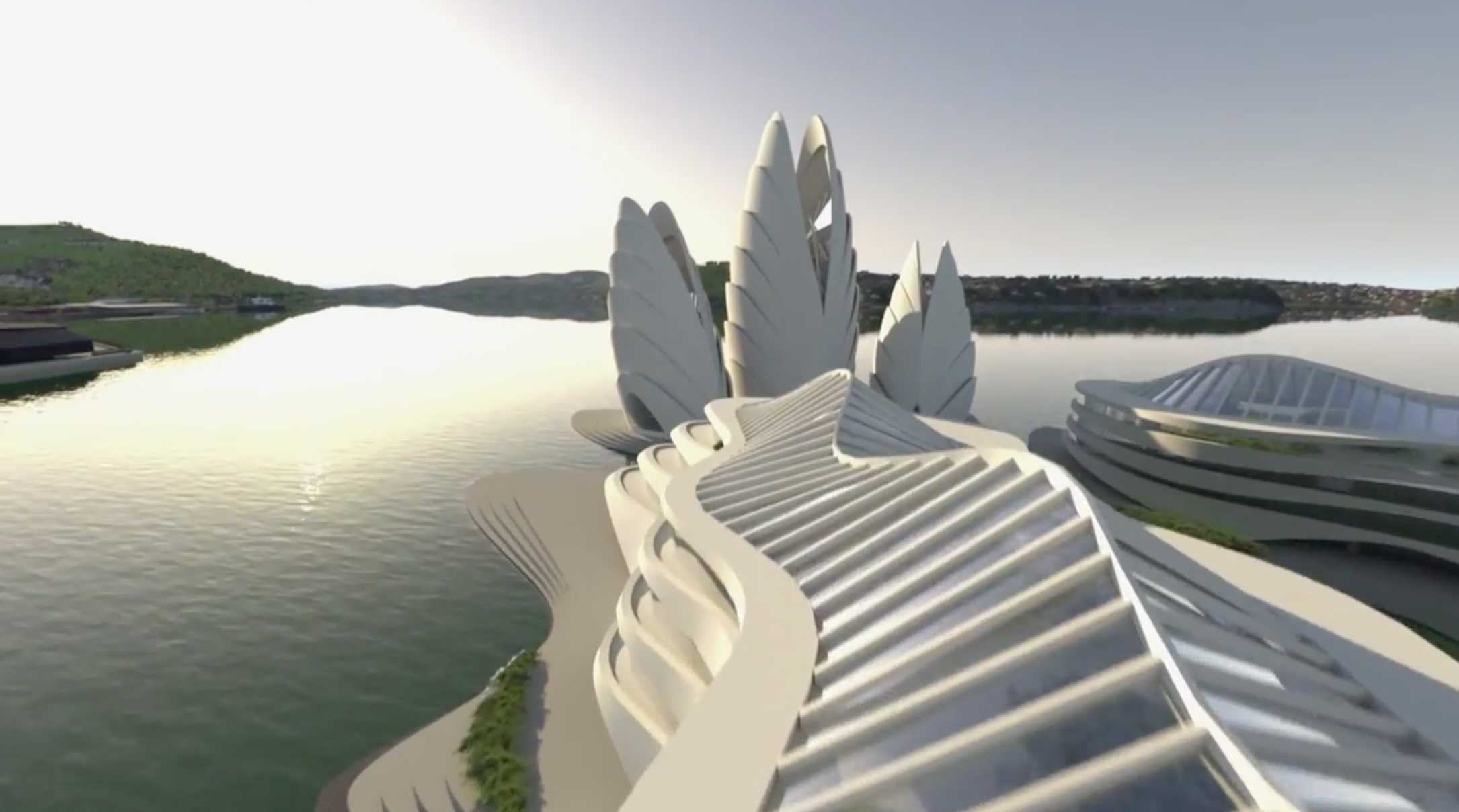 While this blog site is aimed at matters urban and matters Wellingtonian, there arises an occasional foray into waters further south – and this is one such case. Wellington is, as we all know, home to one of the finest waterfronts in the world, and is certainly the creme de la creme of waterfronts in Aotearoa, being possibly only excelled by that of Rawene. Auckland doesn’t come close!

But Hell’s Belle’s – what is that lurking in the shallows, waiting like a floating outcrop of beached blue whales, or a melange of bearded clams and crocodiles teeth – waiting to take the crown away from Wellington’s lovely waterfront?!? It looks like it is nothing other than the lovechild of the (late, lovely) Zaha Hadid and (still kicking) Santiago Calatrava, frolicking naked on the shores of Otago Harbour and coupling with a mission so compelling that they have already produced several flowing, lumpy off-spring. Apparently the vision of Ian Taylor (no relation to Richard Taylor I presume?) and from the pen – no, scratch that – from the parametric modelling tools of Architecture van Brandenburg, the following scheme has sprung, fully formed, wings still furled but ready to fly at a moment’s notice. The Gummint, according to Lord of the Fishes Shane Jones, says “Yum Yum, give us some of that sweet southern magic” and is, apparently, keen to see something happen on the waterfront down there. If only the gumming had been so equally excited and keen to fund Wellington’s waterfront and then we wouldn’t have had to build buildings all over it just to fund the new paving…

Exactly what the various forms are, we’re not yet at liberty to know, but we can make some uneducated guesses. The video starts off with some calatravaesque glowing white bridges, taking walkers from the Octagon (the staunch grey cold granite heart of Scottish Presbyterian minsterness) over the top of roads and railway lines down to the water’s edge.

What has been, up till now, a stone and brick Victorian-era waterfront, full of mainly derelict old warehouses that are sure to fail a earthquake simulation, is transformed into a mini version of Dubai upon Thames, replete with a melange of mixed metaphors about sinuous snaky things, bits of Gaudi-esque banter, Calatravery winged forms, and what could possibly be a hotel perched on the outer point, looking not unlike a collection of giant mussels eating each other, or possibly crocodiles mating at dawn. At present there does not appear to be any functional windows out, but there are certainly skylights in, warming those cold southern hearts with the magic of wavey, bendy Starchitecture.

I’m not here to bitch about a scheme I know nothing about – no doubt the van Brandenburg clan have been busy for months working on this scheme, and no doubt it’s about time that Dunedin has a vision worth fighting for. Our poor wee southern Scottish cousin has been a bit down in the dumps since, about, oooh, 1870 or so, when it passed it’s highlight hours and has been turning itself into a venue solely for the Auckland students to get drunk on cheap booze, far away from their mothers and fathers in Remuera.

There is really no future in becoming a centre known only for student antics involving burning couches and rolling jaffas (or a presumed replacement) and generally, drinking and vomiting a lot (a battle that Wellington is still trying to fight against). I’m not sure that Dunedin will ever become a tourist Mecca due to the simple fact that their airport is situated so far out of town that you almost have to mortgage your house to pay the taxi fare – it’s obscenely far away – but is this the trick that will pull in the punters?

There is no doubt that someone (perhaps everyone) at van B is an absolute whiz with some very swirly CAD software but that’s not always a guarantee of good architecture, nor of buildable buildings. Clearly the van B studio has this aspect down pat, especially as they are responsible for some ginormous “fashion district” collection of improbable show-rooms somewhere in the hidden regions of China, where they are pulling off this swirling excitement on a grand scale.

And clearly, also, they may be better at doing this type of architecture than Mr Swirly-pants himself, the Saint James of the Cala trivia himself, whose PATH station in New York has opened within the last year at a price point closely proximiting obscenity. Was it $2 billion or $5 billion? Whatever – it is obscene on a scale far exceeding even the salary of a Fonterra CEO. So – if Calatrava himself might be too expensive to be invited back to New York again – then are we better to line up for a can of Calatrava-lite and suck back a cold one?