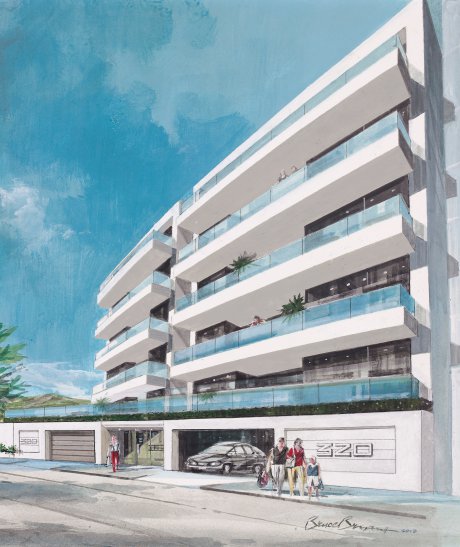 Oriental Bay is one of those rare Wellington locations with both northerly sunshine and views, and as such is heavily sought after by those with money to burn. Unfortunately, those keen to burn vast amounts of their funds on high cost glitzy real estate seldom also possess much taste. While earlier buildings on this southern riviera concentrated on individual villas with character galore, like the much admired seven sisters of domestic bliss by Joshua Charlesworth a 100 or so years ago, more recently the waterfront has been the place for apartments to congregate. There are some apartment buildings with class and grace, like Edmund Anscombe’s slightly deco streamline block, a nicely proportioned low rise building with a top floor apartment commanding a superb view.

Some of the later apartment buildings like Sunhaven were much larger, and concentrated more on housing for everyone, rather than just the elite few with oodles of cash. Sunhaven performs more as a vertical piece of urban design, quietly accommodating a serious number of aged retirees, growing old gracefully in their own setting sun. There are still some houses dotted around, where a remarkable number of young friends of mine have managed to eek out a spot amongst the highrises, lapping up the luxury of sunshine and view, without the need for a million dollar bank balance. Over all, Oriental Parade is an interesting mix of old and new, tall and small, heritage and modern.

But slowly but surely, the interesting architectural features of the area are getting ripped out and replaced by blandness and vileness. Over the last couple of decades, the apartment buildings being created here having been getting more and more vile, with a faux-Miami Vice experience being portrayed to the world. Vast expanses of flat horizontal strips wrap around the inevitable wall to wall balconies, offering a chance for aged orange skin to be exposed to even more sunlight, basking away their retirement years while watching reruns of The Old and the Tasteless. Glass is inevitably tinted, with long ribbons of bland facade frontages obliterating any sense of individuality in the apartments within, and inevitably reeking of crassness.

There are many fine apartment buildings in Wellington as of late, designed by architects with care and a sense of proportion, making our inner city streets interesting with carefully thought out facades and a varied use of materiality. But in Oriental Bay, we seem to be seeing more of the opposite. Appalling developments with untold more money than taste, resulting in deathly dullness from Donald Design. The street frontage is inevitably just converted into an endless series of tedious garage doors and blanked off panels, enclosing the inevitable plethora of high-end SUVs within. There’s no sense of the location, and bugger all relating to context, unless that context is just to comply with the equally hideous neighbour, and by god there are some hideous highrises here already. Having been inside a few of these monsters, I’m always amazed at how any trace of individuality and interest has been wiped out in a horizontal slice of tedious beigeness, the tinted glass and miles of flapping white curtains contrasting with the clutter of inherited antiques and some serious quantities of art works trying desperately to stay out of the harsh sun. Despite the allure of the view to those inside, the buildings really need to offer something back to those outside, other than just a fuck-you I’m rich attitude. Something more substantial than smoked glass to break up the blandness wouldn’t go amiss here.

Indeed, verticality is something that is missing here. Despite Wellington being known for years as a mini-Manhatten, a mantle it wore proudly for years as its office towers strove to reach for the sky, just across the bay at Oriental Parade, recent developers seem to be striving for a mini-Miami, with all the tastelessness that implies. Cue Don Johnson music, vast power-boats with enormous engines and twin pneumatic blonde outriders cresting waves across the bay, chasing tanned coke dealers with gold medallions and bags of blow, being cornered in a back-street carpark by a couple of cops driving Ferraris. Surely all those coke-dealers can’t have come to Wellington to retire? Yet the architecture seems to say so. Where else can you stash that property except in hideously large boats or houses?

What is curious is that those who live in these monsters seem to think that they are “all in the best possible taste”, as Kenny Everrit used to say, except that the rest of Wellington doesn’t seem to think so. Donald Design’s scheme at 308 Oriental, a vast staircase of god-awful development marching up the hill, is one of the most execrable pieces of real estate in Wellington, simply loathed by all for its ugly aesthetics, poor design, and vulgar crassness. Nearby, another Donald Design building at 310 Oriental (these are all lovingly portrayed on his website) proudly shows off the black tinted glass and glass lift fronting the building above a suite of shiny garage doors lining the street, killing off any last signs of street life. The lift, of course, keeps breaking down in the harsh marine environment – a consequence, perhaps, of not using an architect, but allowing an engineer to play at developer instead. No doubt Donald means well, but what he keeps doing is killing off the very things that we like about Wellington – the quirky, the interesting, the well-considered. The prospect of yet another vast crass acre of Donald Design deathly dullness fills me with dread, in much the same way as the upcoming Royal Tour – it’s something that we could well do without.