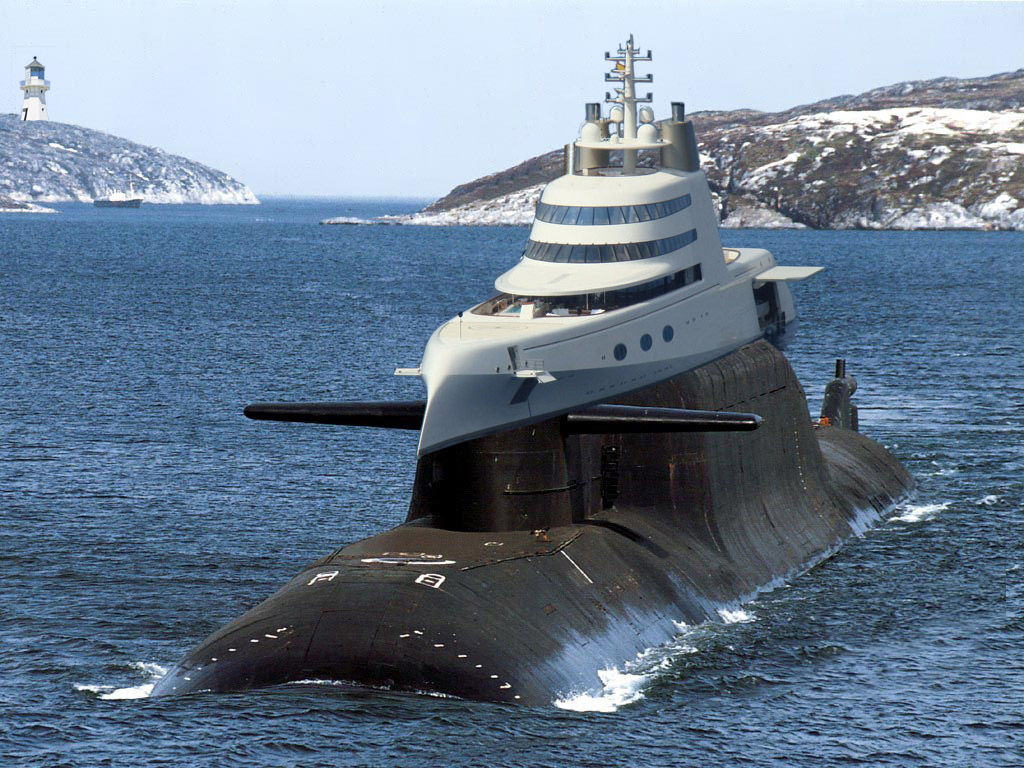 News reports this morning that “A”, the Russian phosphate and gas tycoon Andrey Melnichenkoâ€™s futuristic white “yacht” has sunk, are believed by some to be a smokescreen for a far greater secret. Agents working worldwide for the global Eye of the Fish news network, can safely reveal that the Philippe Starck designed vessel that has been parking mysteriously in the centre of Wellington harbour, is in fact capable of completely submerging. This helps to explain how the vessel has been appearing overnight in various harbours around Aotearoa, without anyone viewing it arriving or leaving. A submarine clearly is the only possible reason, and explains the odd appearance of the conning tower / superstructure that appears above the waterline. Exclusive to Eye of the Fish is the following paparazzi snaps of the underwater substructure, captured just as it was surfacing, and showing parts of the superstructure unseen by anyone without security clearance until this morning.

What is below that part of the ship visible is even more daring in terms of design. Although it has been widely reported that at 119m long it is the largest superyacht to have visited New Zealand and is 1m longer than New Zealand’s two warships, the frigates Te Kaha and Te Mana (the biggest New Zealand-owned superyacht is Graham Hart’s 77m Weta), what has not been reported until now is that the ship has another several decks below the waterline, capable of surviving full-scale nuclear warfare. The “A” was built in Germany in 2008 by the same Hamburg firm that built the World War II battleship Bismarck, for the owner of the Russian petrol station chain Big ‘n Large. The Wall Street Journal reports that at the top of the conning tower of the boat is a spiral staircase lined with scalloped, silver-leaf walls, that a door with a fingerprint security system:
“…opens to an all-white, 2583-square-foot master suite wrapped in bomb-proof, 44mm glass,”.
Yes, it seems that the whole ship runs off Apple’s latest iOS7.1 as used in the iPhone 5S. The ship is simply called “A”, after Melnichenko’s wife Aleksandra – a former Serbian model and singer he married in a $36 million ceremony. Serbian supermodels are well-known for their quiet demure behaviour and good taste in interior decoration. The long projecting roof sticking out towards the prow of the vessel covers an outdoor pool – one of three pools on board.

Below is an image of the well-kept Gas stations typical of those of Melnichenko, who is renown for his quality care of the quality Russian stores, and his devotion to customer service. Satisfaction form the Russian people is said to be high at the quality of these retail outlets, where all sorts of quality goods can be purchased, some still with their “Made in Crimea, Ukraine” badging still evident.

In another mockup exclusive, of the “ship” moored in Napier harbour, this view shows the full size of the indicated submarine structure. Optimist dinghys sailing in the forefront are reputed to have seen glimpses of the substructure and are returning to base to file their reports back to the Fish headquarters.

“With its radical shape – more sleek submarine than boxy pleasure boat – and reams of custom parts and finishes (including bath knobs costing US$40,000 ($46,211) apiece, A is a conspicuous marker of an ocean-going plutocracy that’s largely been untouched by the recession,” the Wall St Journal reported. Indications are that the basis of the submarine design is the spaceship shown in the Pixar film Wall-E, said to be an all-time favourite of Starck, who has a renowned love of animation and cartooning. Mock-ups of the vessel have been undertaken by some of the little fish here at the Eye, including those fish who love a little nibble to stimulate your early morning senses.

Apparently Andrey and Aleksandra have been seen driving ashore at the boat ramp at secluded Scorching Bay, in a matching white Lotus Esprit submarine car, similar to the one snapped here by an Eye of the Fish contributor. It is thought that Melnichenko has been secretly meeting local tycoon Peter Jackson, and the two men have been comparing the size of their swelling bank-balances.

Also captured was this top-secret picture, believed to be the “A” launching the under-water Esprit transport vessel, in a rarely seen angle of the Russian uber-magnate’s mothership.

After snapping these exclusive pics, the Eye of the Fish was chased away by Melnichenko’s / Jackson’s secret security divers, who had arrived on the Wellington sea-floor scene in a remote controlled shark, clearly a prop for the upcoming Tintin film that Jackson is working on, “Red Rackham’s treasure.”

Starck, a bombastic Frenchman who loves to speak “like ziss, wiz a siriusly silly accent”, that he puts on just to captivate his design followers, is reputed to have worked on and off with people in the film and animation industry for many years now, evidence of which can be seen by this design for a juice squeezer based on two characters from Pixarâ€™s Wall-E film. Evidently issues with manufacturing the Juicy Salif caused the appearance to be transformed into metallic, from the original white cladding. This original photo from the Starck archives, clearly unretouched, indicates the design direction that Starck wanted to take, even from an early age.

Unveiling of the design blue-prints of the “A” will set the design world of global tycoons on fire. Chief among those is Sir Richard Branson, who has a submersible super-yacht of his own (pictured below), and he is bound to be interested in the somewhat larger design for Melnichenko. We hope to bring you further updates to this story as they come to hand, and we expect to know further on the accuracy of these reports by later today.

Toomath, Cheshire, Home of the Year, and Kiwi Dundee