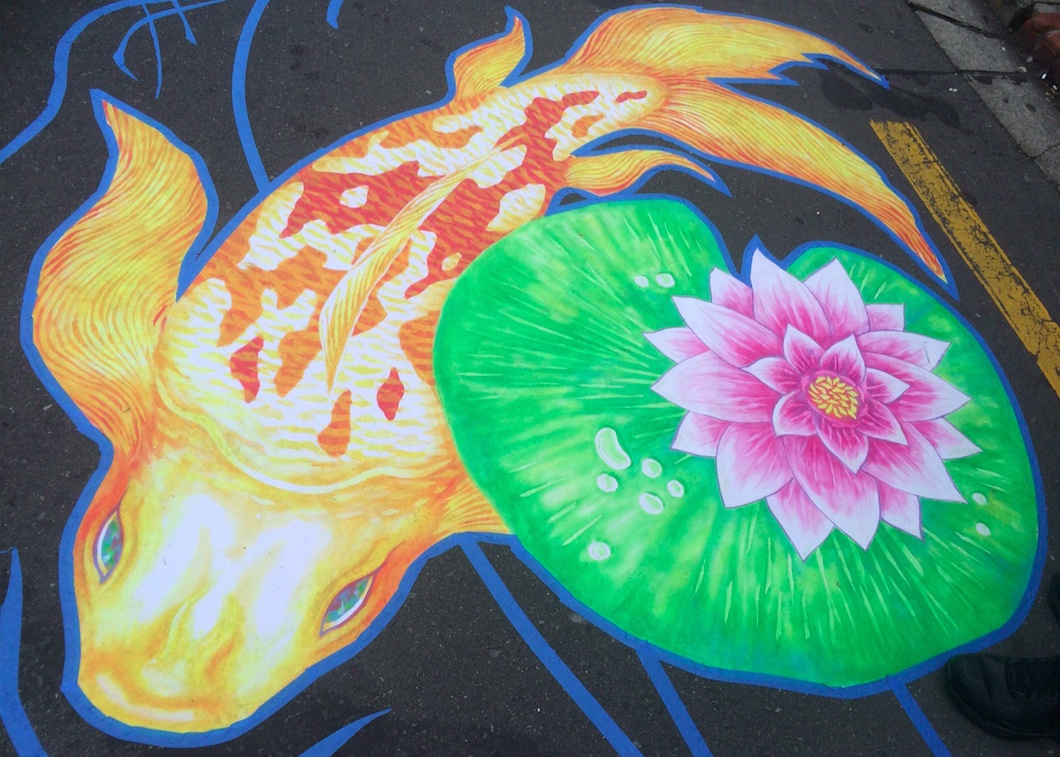 Everything looks better with sparkles, seems to be the motto of the Cuba Dupa carnival organisers. And apart from the glistening rain drops, everything was indeed sparkling over the weekend, with the whole of Cuba Street entering into the spirit. This town sure knows how to party!

I love this city, with the mad way that we have taken the name of one of our first ships to bring settlers here, and extrapolated it into a Latin carnival. I felt like I was the only person not dressing up – many people were steam-punked, or had complimentary colour and glitter and even flowers in their hair, and with sound stages at every corner and street end, the city was full of music, art, creativity and life.

Even the rubbish bins had been transformed into works of art, temporarily, with children’s art efforts blocking off the regular bins and redirecting people to recycling stations (only bad point: we need twice as many) complete with volunteers guiding you which bin to put your waste into. Incidentally, while: Hooray! – can we please have a range of bins please all over the city? Can we have recycling bins next to rubbish bins, every day of the year please, all over Welling Town? Isn’t it worth recycling more than just 2 days a year?

It’s interesting to compare it with the Cuba Carnival of old, back in the days when it was run by slightly mad locals rather than run directly by the Council itself. I do miss the actual Carnival Grand Parade – with the community floats and dancing girls and decorated trucks with lights etc, way better than a Santa Parade but not as noisy as a Notting Hill Parade. That was indeed a highlight – but now instead we have theatre and vaudeville all over the town (well, all up and down the street at least) in individual clumps. Less concentrated, more spread out, both in terms of area but also in terms of time. So you get pockets of enjoyment all through the weekend. I guess that’s Ok.

The real success though is the transformation of areas normally ruled by cars, into pedestrian havens. If only we could put State Highway One underground at the Cuba / Vivian junction – the eternal stream of cars is just so divisive. Can’t they go somewhere else? Can’t Karo Drive be made two-way, at least for a day? The big Samoan guys manning the intersections on this crossing? Brilliant. Human door stoppers, stopping the traffic and letting the pedestrians flow.

But the pedestrianisation needs to spread, permanently. Maximus was always an advocate for the permanent pedestrianisation of Swan Lane car park: that it should be a park alright – just for people though, not for cars. I totally agree. And upper Cuba Street as well, more permanently. Just as things go better with Coke, or everything looks better with sparkles, Cuba Street works better without cars. Interestingly, while Marion Street also was partially denuded of vehicles, it didn’t feel quite right. Didn’t have the party atmosphere that Cuba or Ghuznee had. Is it just too damn wide? With the sad departure of the Post Office, there is no longer any reason for aged bad drivers to do U-turns in the middle of the street and park poorly – perhaps the Council needs to have a rethink about this whole street?

The Laneways, of course, performed brilliantly (except for West Bank, which looked tired and dead). The Leeds Street area was brilliant – the child performers on stage were amazing (young and hungry for fame and glory – what a combination!) – the Hannah’s Courtyard is a natural gathering place and stage area, although I’m not sure I would like to live there if that noise was going on permanently.

The absolute prize for me though, was the transformation of the area near Fidels into a fern-clad kiwi grotto, complete with Cuban cocktails. It was like a winter wonderland, a thermal highway holiday hide-a-way, complete with rum. Magic, just magic. Well done Wellington!