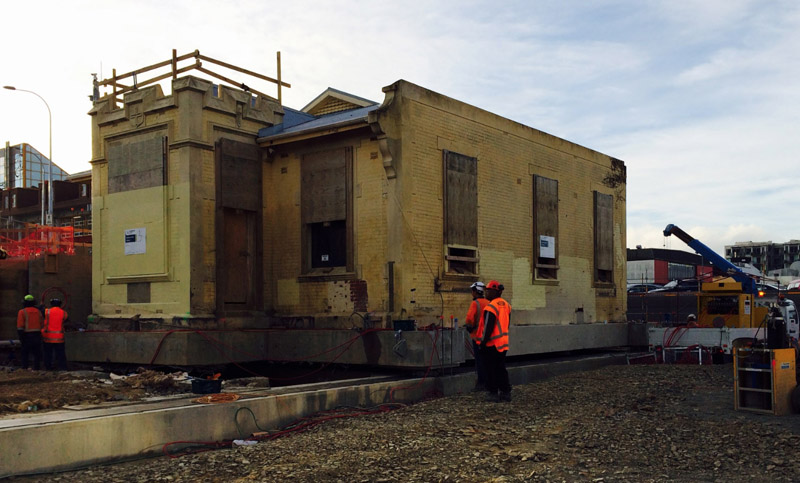 Blink and you miss it. Never has there been a more apt saying, than with the moving of the CrÃ¨che of Compassion. It can’t really be said to be a surprise, but the CrÃ¨che was moved backwards on Monday, quietly and without any real fanfare. Which is surprising, as the NZTA are normally keen on a bit of good PR. I’m most annoyed, because I actually physically walked past the site of the crÃ¨che twice yesterday, and didn’t notice anything – and apparently it was moved in between times. Morning – still there. Afternoon – moved. Chance for Maximus and the public to observe actual moving procedure – nil.

But all is not lost. It has to be moved at least twice again. It doesn’t seem to have been moved all the way back, so it has a little bit more of that journey. Then it also has to be moved in the Z axis, upwards. And then again, it needs to be moved sideways, to get to the final resting place.

What is interesting to me, is that it was moved, quietly, just as the Basin Bridge Board of Inquiry seem to have been waking up to the realization that the CrÃ¨che move is not needed by the War Memorial Tunnel work, passed under urgency a year ago, but is only being moved now to facilitate the potential new Basin Bridge, which doesn’t even have permission yet. If I have read the reports correctly, the Board have been trying to ascertain the legality of the dividing line between the War Memorial Park work, and the Basin Bridge work, with the CrÃ¨che obviously sitting so closely to the edge of both. With things being the way they are, and The Board moving at such a glacial pace, it is no surprise that in the intervening confusion, NZTA just slipped in and moved it anyway. You snooze, you lose.