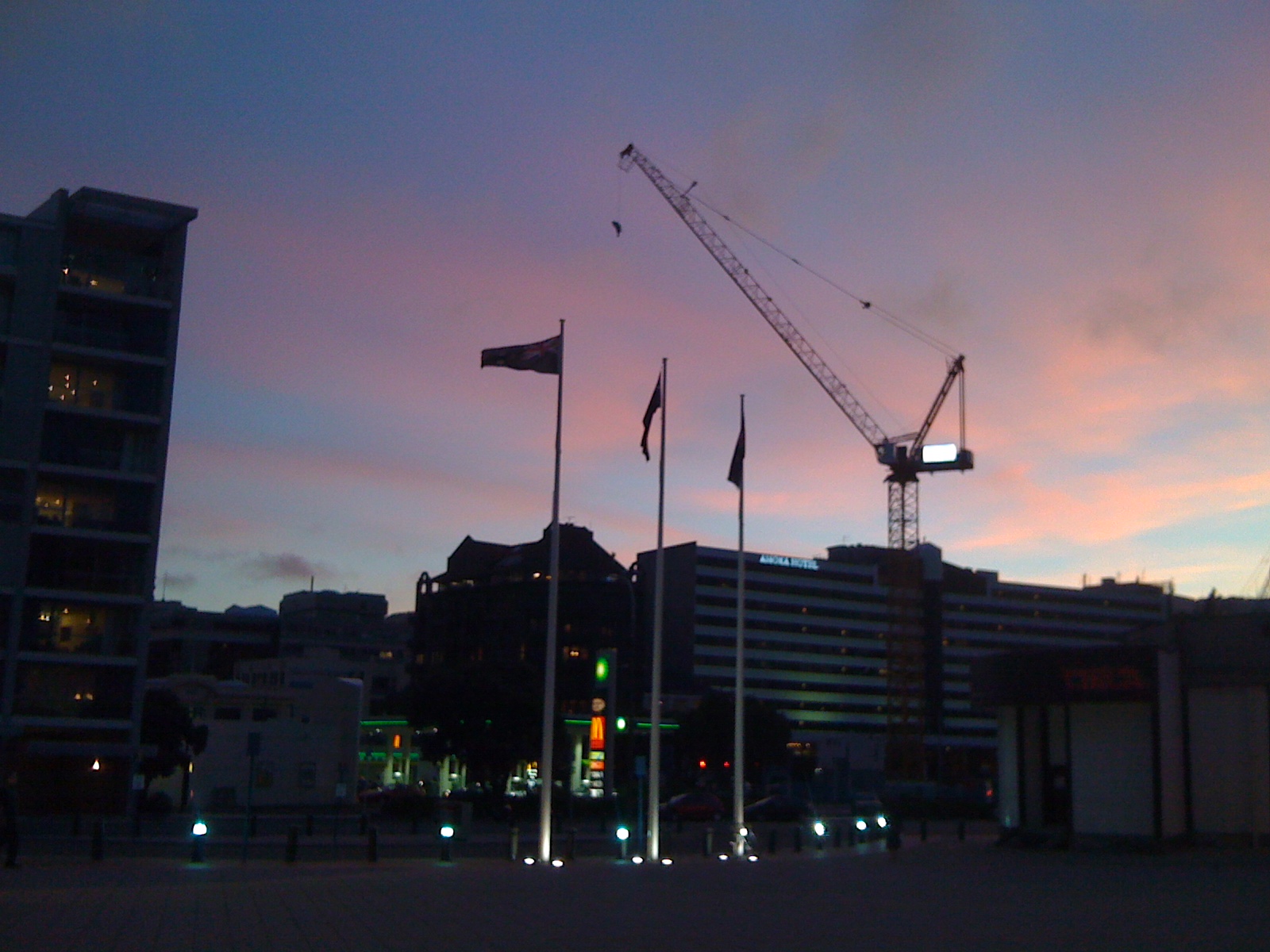 Although the recession is by no means over, and our city is heading into yet another winter with a construction deficit, there are some bright shiny lights on the horizon. No, not the gleaming lights of a distant city, nor the landing lights of an Imperial star-fighter, but a more simple, down home version: construction lights on a crane, coming soon to a neighborhood near you. I was out the other weekend taking photos for this blog, as you do, when I realized that we almost have a mini building boom going on. Right here, right now.

First up, and most prominent of all, is the crane that is building the new Willis Bond project: “Clyde Quay apartments”. What you and I might know as Overseas Passenger Terminal rebuild, but without the passengers, and a different take on the word “overseas”. It is a tricky thing to photograph, projecting out to sea, and other than hiring a kayak, being provided with a personal tour, working for Athfield’s, or actually buying one of the apartments, I shall probably never get a good shot of it. But, the wharf there is crawling with cranes and lifting equipment, and progress looks good. Logically, they are starting at the far end, and have got more than halfway down the wharf by now – the job must be a logistical nightmare, juggling men, materials, and truck-movements up and down the thin remaining walkways to the side, as well as having to pile up to 35m down to find some rocky surface below the seabed. Well done to LT McGuinness for tackling this. Massive adverts in the paper the other week indicate that they are doing well on progress, as well as on sales. No one seems frightened off by potential tsunami threat, which shows an admirable disregard for that thousand year event. Fingers crossed that it looks OK on completion – because it is looking pretty massive during construction, with up to 6 stories of steelwork on show. Far, far higher than the illustrations gave any credence to. Architects are, of course, Athfield Architects, who seem to have a good – almost symbiotic relationship with Willis Bond and LT McGuinness. Structural Engineers are Dunning Thornton, and completing the team is Beca.

Secondly, and just as prominently, is the new development on the old Il Casino site in Tory St. It is one of the more beautiful skeletal structures going up in town, with a reduced frame of thin steel tubular columns and some big slabs of south facing precast concrete standing guard to the rear. So far it appears to be a mixture of opposites – light and dark, heavy and weightless, concrete and glass. Now getting shrouded in safety netting, it will be hidden from view until the final unveiling – presumably later this year. There’ll be more on that in a later post, but here’s a wee peek now:

But of course it is Taranaki St that is showing off the most at present, with two giant apartment projects going up in town at present. There’s the “One Market Lane” project on the site of the old “Watermark” project, although at a quick glance it looks a very similar scheme. Apparently though, it’s all very different. Not quite the massive money-pit that the earlier scheme was, the cranes on site have been busy at work in the foundations, and at last there is structure rising out of the ground, in a very, very congested site that must have the contractors effing and blinding. A perimeter ring of concrete columns has appeared on the north and east sides, and we should see some real building progress before the year is out, with completion some time in 2014. The construction team is much the same, but architects on this are Studio Pacific Architecture. LT McGuinness must be stretched to capacity at the moment, with these two massive projects going on simultaneously.

Just a few metres away up Taranaki St, is the biggest (tallest) project under construction in Wellington, and it is at a similar stage to the Market Lane project – running just a few weeks behind. For years the site was home to the dodgiest of dodgy strip-clubs, not that there is ever a high level of finesse in such things (or so I am led to believe), carefully sited above a quick lubrication and service station. Que here for unrequited double entendres… More to the point, the new building will provide a long sought after screen for Wellingtonians of the ugly side view of a giant old carpark and its aging collection of graffiti that has long towered over Taranaki St. Instead we will have the “Elevate Apartments”, an Architecture + designed building, that will offer its residents an excellent, although slightly slanted view of the harbour.

There is a whole different team at work here, as the project is a Stratum development – their biggest yet I believe – and also one of Wellington’s tallest apartment buildings. Certainly it must be architecture +’s biggest project to date, although they have had a lot of practice over the past few years with the Republic, Monument, Piermont developments. Who is the rest of the team? I honestly don’t know – Stratum’s websites are always annoyingly obscure and tell you nothing about what you (and I) might want to know. Eventually I found out from the SCNZ website, that the building is engineered by Aurecom and is potentially one of the more exciting structural solutions in Wellington = it’s 15 stories tall and sitting on springs. Not just your average car ssuspension springs, but similar: these are by Ringfeder, and will make sure that the whole building can bounce around, without falling to the ground. Read more about it here if you want to know more. As Tait, Sidwell and Finnegan say: “Tension limited Concentrically Braced Frames and Steel Moment Frames with Sliding Hinge Joints were innovative applications of low damage design adopted in the design. The use of low damage steel frame systems meant that stringent site constraints and architectural geometry could be accommodated.”

And rounding it all off, the other big cranes on the horizon are of course the lumbering tracked cranes of the NZTA’s contractors, busy walling off the long awaited Memorial Park tunnel. More coming on that one too!