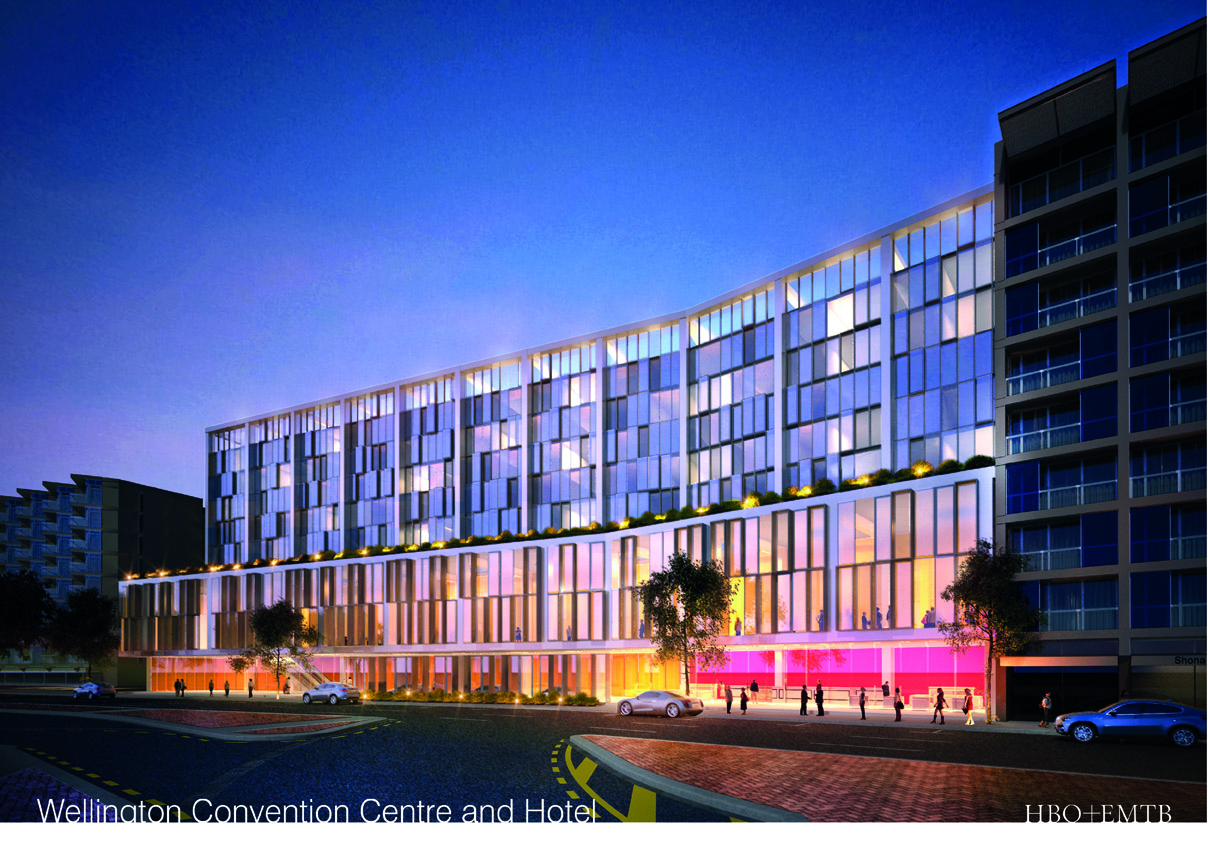 So the big news of the week, in Wellington at least (if we ignore the wars in Iraq, Syria, Sudan, Ukraine, etc), is the proposal for a large convention centre and accompanying Hilton Hotel smack bang in the middle of the city. The City Council will be voting on it this week, but it’s not out for public consultation. While it feels a little trite to be worrying over such first world problems of what it looks like, while the world keeps erupting in war after war after war, when all anybody really wants to do is watch the football; we still have the issue of a large empty section in the middle of town, for which a developer is planning to fill with a very large building. In the eyes of Wellington – is this the best we can do for our city? In Urban Design terms – what are we getting for our capital city – how does it work? Actually, nobody knows yet, because we haven’t seen a plan – all we’ve seen so far is this very pretty picture.

But I want more than just a pretty picture. I want substance. I’ll leave the bean counters to debate the net worth of a $2m cost to Wellington each year, but there is more than just the Hilton at stake. What I’m more interested in how it fits into our grand city plan (that, of course, implies that we do have a grand city plan).

So there is no plan for a Casino, which once upon a time was seen as a saviour for Wellington’s ills, but the Convention Centre has, it seems, taken the place as the piece of infrastructure de jour – if you don’t have one, you’re nowhere. Lower Hutt wants one, although the logic of that really hasn’t been thought through. Who wants to go to Lower Hutt? Where would you stay? Where would you go to eat out? The answers to those questions are quite simple: No-one, Wellington, and Wellington. Auckland wants a Convention Centre as well, even though they already have a large one – just for the hell of it, they want something bigger, and seem to be quite happy to accept bribes to the government to get it, with Sky buying off JohnKey with a few hundred more frazzled Chinese pokie players. Dodgy, dodgy, dodgy, and he’ll probably burn in hell for it, but who cares – its Auckland, and they’ll do what they want. Queenstown wants one too – and their $52 million deal is all the more relevant, as their Council is proposing to pay for a large chunk of it themselves: $29 million.

On the surface, Wellington has got an extremely good deal on the table. An (almost) reputable developer, an International Hotel chain, and an economic boon to our fading rose. This city definitely needs an economic boost. But I still want to see some details. What’s the plan, Stan? Well, the Architects for the project are HBO+EMTB, whoever the heck that is. Actually, in Wellington it’s Michael O’Brien, but I have the feeling that there may have been a bigger team involved – the HBO+EMTB team evidently has offices all over Australia and throughout Asia, as well as a couple of satellites in NewZild.
“HBO+EMTB is an established, regional design practice. We design responsive environments, delivering sustainable, humanistic solutions that integrate commercial imperatives and social objectives.
The HBO+EMTB group offers multi-disciplinary expertise in architecture, interior design, workplace solutions, urban design, landscape design, heritage and planning. These complementary services achieve quality, cost and time efficiencies for clients â€“ from project inception to occupation. Representing a century of design excellence, HBO+EMTBâ€™s history is complemented by a fresh perspective.”
OK – so what about a plan? Alright then, I’ll do one.

I’m trying to figure out how it fits into the city context. At present, if you want to go from the main street of Wellington’s action-packed night-life (ie Courtenay Place), you have to wander off down some awkward footpaths on either Tory or Taranaki St. Neither of them are good experiences. The desire line, which I’ve shown here in blue, leads you straight from Courtenay Central, direct to the waterfront and to Te Papa’s front door, and it passes straight through the site for the Convention Centre (outlined in red). Its a route that I often take as a shortcut direct from the St James to the Foxglove, say. Its always been a bit dodgy, given that until recently it was a working car yard, and they hated people crossing their patch without buying a new Alfa, but it needs to be recognised as a major pedestrian route. Trouble is, of course, that Coundown are planning to put their giant foodbarn in the way, so the protection / recognition of the route needs to be set down in stone even more. It would be a tragedy not to do so. The planners and urban designers at WCC have been banging on about laneways for ages – now is your chance! Anna Harley? Gerald Blunt? Jan and Clay? Tom Beard? Andy Foster? Iona Pannett? Celia?!? Whoever the heck is in charge of things down there at WCC, make sure you preserve a route through!

Of course, most of the time the building isn’t going to look like that sexy night-time shot. Most of the time we see it, it’s going to be daytime, and look like this (above). It’s competent, it’s modern, glassy, and fairly bland, but then again, Hilton Hotels are nearly always bland, and Mark Dunajtschik also loves bland. So for him, this is probably pretty exciting. Personally, I’d be looking the other way – what about the view out to the front?

Or the view out, to the rear?

Even though the views out aren’t the best, this has the potential to be a fantastic asset for the city, in just the right place. Yes sure, it has a mini-motorway swishing up either side of it, and the view out is just of the arse end of Te Papa, but it is perfectly located to be in the middle of the city. It has a massive carpark already existing at one side (which presumably will get fixed one day…) and the national treasures of Te Papa out the other side on your way to the best little waterfront in the world. It has a entertainment zone of fast food stalls and movie theatres nearby, and a supermarket on tap. Some of the best beer bars nearby (Hashigo Zake anyone?) and even access direct to Waitangi Park. Best of all, for me, it could possibly also double up as the long awaited venue for mid-sized events, like bands and – heck, anything is better than the awful shed 6 or the TSB ! Bring it on!

Feilding scenes and the Pakeha in the Butter-Churn