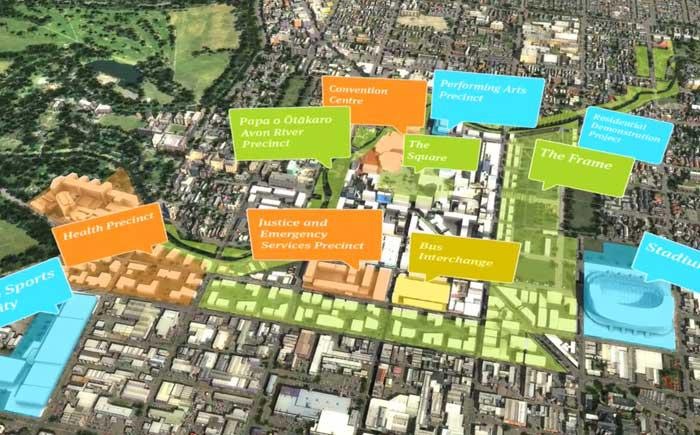 The 100 day time limit is up, and the very green-looking “blueprint” is out. This blueprint should set the city alight, in a good way I hope. At the most basic and obvious level, a new greened strip, an entire city block wide, wraps around the south and east sides. Hagley Park, of course, already sits to the west. The Avon River wraps its way lazily round the north side. The new garden city then, sits entirely wrapped by a ring of green.

It is a big and bold vision – city planning for a vaunted post-colonial age – and has been brought together by a big united team of architects, planners, engineers, urban designers etc – all headed by Boffa Miskell: landscape architects and planners. It’s nice to see that not everything in Chch is going to be by Warren & Mahoney. An entire city block wide will really reduce the city down to a much smaller size – and the rigidity of the greenscape will set a firm boundary to do things – confine the city to stop it sprawling, and also to set a clear boundary for the suburbanites as well. Judging by the values placed on the houses at the edge of Hagley Park, there is a plus factor to being on the edge. Well, now there is more green to be on the edge of. Ka pai!

I don’t know about you, but I find it hard to orient myself in Christchurch. It is just much of the same in all directions – worse than Palmerston North. A bit of something different is really going to help therefore. No longer will the city just fritter away at the barriers. It will stop, and keep those nasty box box retail zones out where they belong in the nowheresville of the suburbs. It’s not as radical as Sir Robert Jones scheme to dig out a large lake at the centre of Chch – not a bad idea, but definitely one which took a more sylvan visual of the city as a romantic ruin, islands of ruined stone churches afloat in a sea of blue. They have gone for a sea of green instead.

I haven’t had a chance to read the report yet, but one thing I’m going to be looking out for is the proposals for traffic. Will the light rail tracks have been integrated back into the planning? Will they have been extended at all? Or have they been omitted entirely? Has Chch managed to avoid its love/hate relationship with the boy racers? Will the newly reinstated avenues of green merely become stretches of V8 revving tarmac?

Of most interest however was the comment from one of the planners. He said that what they were after was the tight city framework that Wellington has, and does so well. That’s a huge compliment to us – and a warning not to get complacent – but a route down which Chch will have a problem following – we have a Harbour to edge our city, and a rim job by a paddock of green will never have quite the same effect. He also mentioned the Laneway word – that is all we hear about lately. The buzzword de jour. Everyone has been to Melbourne. Wellington wants a Laneway down Opera House Lane – despite it being patently obviously the wrong place. Auckland calls its Festival the Laneway just to copy Melbourne some more, despite Auckland not having a single way worthy of being called a Lane. Oamaru has a Laneway that actually is a Laneway. But good old Chch? What will it take to convince them that their biggest problem is the car, and the people that drive them? Delete some of the roads for cars, and automatically you will have some lanes for people.

And of course, the final question: where do all the pubs go? The answer seems to be: here:

In praise of… Roof Top bars