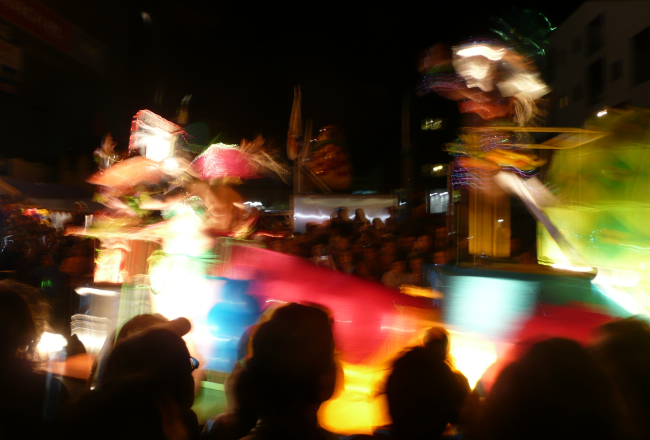 Every year, around this time, Wellington comes alive with festivals and carnivals. Last year it was the Cuba Carnival, when we blossom briefly into a Latin lovers paradise for one brief weekend, complete with dancing girls, massive gaudy floats, and the almighty Batucada band. We blogged about that somewhere – maybe here. Note to self: must start planning for massive Fish float for next year.

Perhaps combined with the Film Archive, sitting on one of their new Aeron chairs, and being pulled along by a school of massed sardines. Something like that, anyway.

This year of course we have the Festival, which is really two – the Fringe, on now, and the International, which is about to start soon: 6 days and 14 hours away. Every year, like most Wellingtonians, I forget to buy tickets until its too late and the best events have sold out. But then again – how do you know what tickets are good, unless they are selling out? Go to their award winning website and find out. We’ve also got Homegrown coming up this weekend, and Tom Jones on Monday, although sadly all his tickets are gone except for the back row, putting him well out of reach of my knicker throwing potential. Lucky for him. But his voice is so powerful, we should still be able to hear What’s new Pussycat? without a ticket, as his songs escape the MFC and echo around the rooftops of the inner city.

Around the world, this time of the year is Carnivale Time, which makes a lot more sense if you’re Catholic and from the northern hemisphere. There’s a Lent thing going on, fasting for Easter, echoes of Fertility rites, issues of spring goddess birth and rebirth, giant eggs, gold lame costumes, nudity, hilarity, and a fair bit of procreation due to all the exposed flesh. We miss out of that here in NewZild due to our inbuilt Scots prude heritage, although the slappers of Courtenay Place do their best to make up for it. But we do also miss out on the masked elegance of the Venice Carnivale, where elegant costumed revellers cavort behind bejewelled masques, with the somewhat bizarre origin of being a method to stop men dressing as nuns from entering nunneries for a bit of How’s your Father. Well dodgy, those Venetians (although, in terms of Urban Design, quite good…). Speaking of good urban designers, we farewell today Gerald Blunt from the Council, who is leaving to set up his own Urban Matters consultancy, after a decade or more of excellent urban design guidance in Wellington. Fantastic work Geraldo, and thanks for keeping Wellington such a tight urban unit. And good luck to the rest of you.

Continuing on with the Carnivals, we also miss out on the earthier delights of Rio’s Carnivale with the massed rump-shaking booty-call of Brazil’s finest breasts and buttocks, and even getting downright dirty with the mud cavorting of the Bloco de Lama in Paraty. While I would no doubt do well in the Bloco party, slithering away in the mangroves, I’m very envious this year of an urban designer friend of mine who has gone to Rio expressedly to see the Carnivale and experience the Urban highlights of a city that really knows how to party. Kevin, if you’re reading this, send us in a picture or two.

But the greatest festival of all, is surely the vast un-organised madness that is Burning Man in the Black Rock deserts out of Nevada. Normal rules of law seem not to apply – neither the laws of gravity, nor the normal prudish morality of clothing. It sounds great – days of anarchy, culminating in a giant statue burning: drugs, debauchery, artistry on the edge of madness. But a fish in a desert? I’m afraid I can never go….