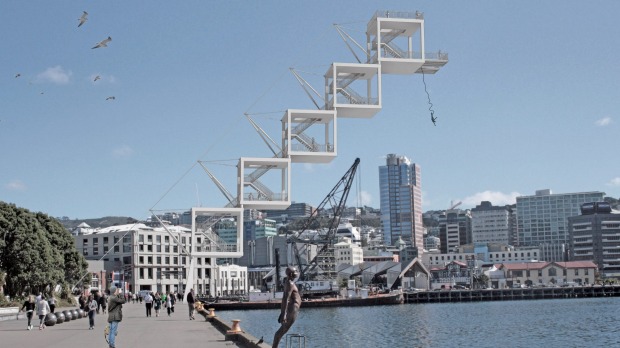 Making news today is a proposal by Architecture Workshop for a giant platform suspended out over the harbour, thus:

It is audacious, to say the least, and probably stronger words are necessary: amazing, visionary, and stark raving bonkers also spring to mind. Chris Kelly, the resident auteur of Architecture Workshop, is one of Wellington’s finest architects, sadly under-utilised despite his obvious talent. His former house in Oriental Parade is up for sale at the moment, which is in itself the most exciting building on the Parade by a long straw, and his design for the visitor centre at Waitomo Caves is still one of this country’s most intriguing spiral bound structures, entrancing the tourists and entrapping the tourist dollar like a giant hinaki eel-trap.

The DomPost describes the proposed structure as a diving platform, although it is clearly shown with a bungy-jumper attached, and no wonder – the height to the top of the structure is about the height of a ten storey building, and a dive off that without a rubber band attached to your leg, is likely to fairly thoroughly smash your head in. As they say, at that height, hitting the water has much the same effect as hitting concrete…

But that’s not the really exciting bit for me. It is the cantilever that is the audacious thing about this project, a series of hollow cubes balanced precariously on top of each other, stopped from falling ignominiously into the drink by a hefty back-stay. It’s heavily reminiscent of a sculpture that Santiago Calatrava did in his early days before he became the superstar he is now, when his sculptural forms were more hands on and less megalithic.

Here the blocks are solid stone instead of hollow steel cubes, but the detail is all in the backstay – and the big question – how do you get it up there? You can balance some blocks in that shape with the help of a few well-placed books or boxes, but on this large scale, would the whole thing have to be supported by scaffolding till the top cube is in place? So much excitement – so many questions!