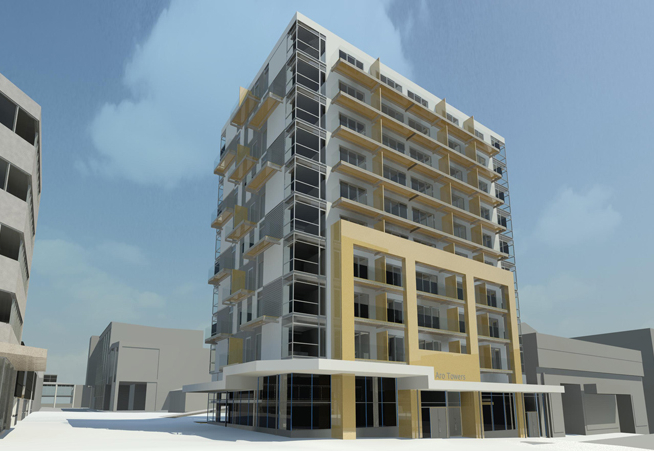 While we’re all waiting for the case of the hung mayoralty to be settled (due today – will it be Prendergast for a 4th or Wade-Brown with a 1st?),
Post-script: Just announced – We have a new Mayor. Celia Wade-Brown beat Kerry Prendergast by a total of 176, the closest mayoral race yet seen. End result: 24,881 to 24,705 votes. To be sworn in 27 October.
It seems that at least one developer is still having faith in the otherwise pretty stagnant property market.

Yes, the Te Aro Towers project appears to have made a comeback – originally it was to have been by Merge Developments, whoever they were (they’ve merged totally into the background now) and now it is someone new. Yes, yes, it is probably exactly the same people, just under a new name. And yes, yes, yes, it certainly is exactly the same scheme as was being touted around before.

There is a slight difference of course, in that it is now not so much Towers, as just a single Tower, but nothing much has happened except the rendering has been redone with a crisper DPI, and possibly a floor or so less in height. That is to say: there is a 9 storey height limit around here (27m) and this building is only 11 stories, instead of the 13 stories they were once showing. Clearly someone at either the Developers, the Planners, the Architects, or the Council can’t keep up a simple maths equation. 27m height limit really should mean a limit of 27m: Archaus show the height limit as 31.2m on their elevations, thereby taking an extra 4.2m as a given.

The plan of the building is still just the same – the developers still clearly believe that the old “two for the price of one” ruse will slip past the bankers, and persuade them that here we have a quality investment. I’m still pretty unconvinced: the theory is that because the banks will no longer loan money on shitty little apartments, then having a ‘dual’ apartment of one tiny flat and one slightly larger than tiny flat, will let the bank fund it as one purchase. Of course, as soon as the bank has closed the deal, the ‘canny’ investor will rent out the bolt hole to help cover the mortgage.

It is a plan that has been done before in Wellington, at the phenomenally crappy Duel on Vivian apartment building, where the bedroom going-ons of the poor cramped inhabitants are now on display to the students lounging on the grass of the newly reworked park across the road. There the apartments are so small that beds are pushed up against the windows, the graceless lack of height and proportion so evident in every move. I suspect that the result here in Te Aro will be much the same.

We deserve better than this in the capital.