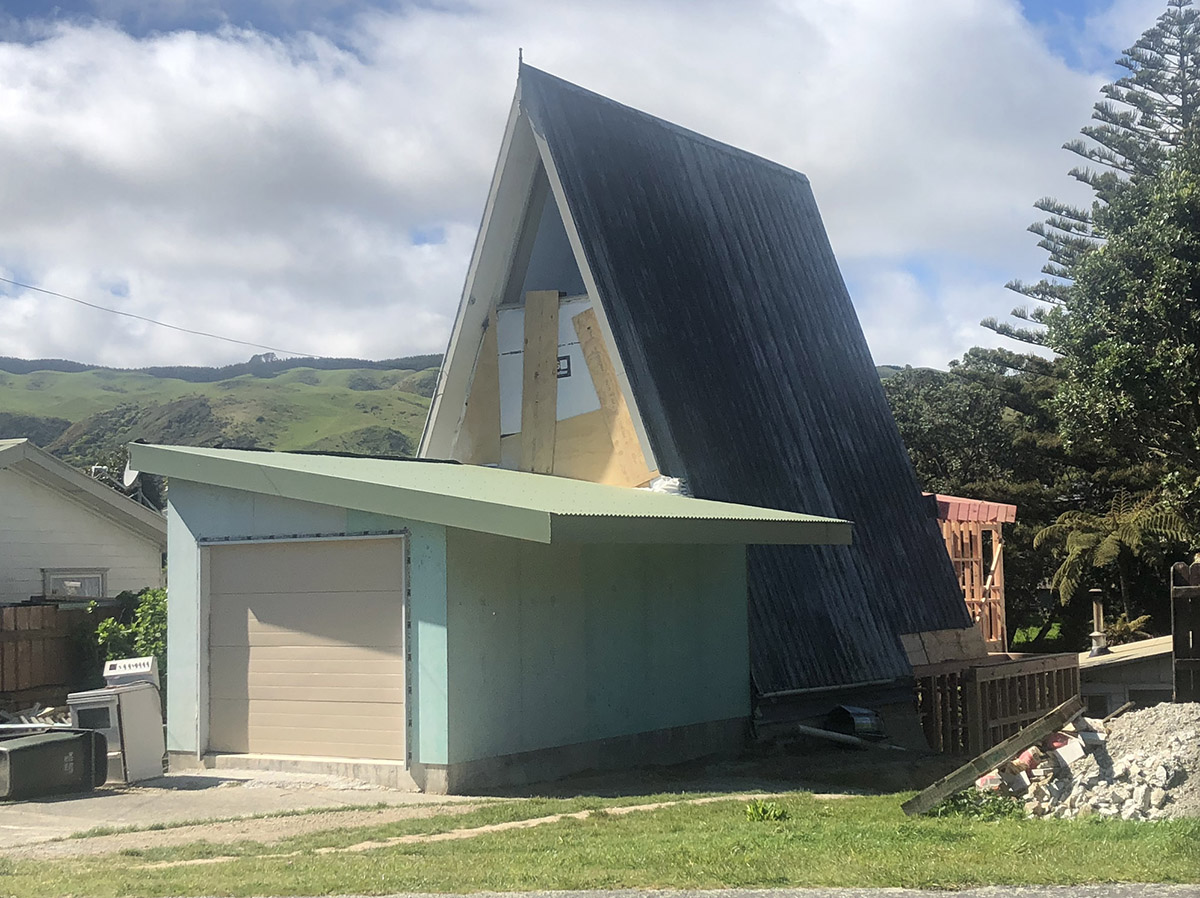 How do you feel about A-frame houses? Being a child of the 70s, I grew up with the humble A-frame as an example of daring, alpine, exciting architecture, even if it was in Titirangi rather than halfway up the Swiss Alps. An A-frame spoke to me of an adventurous spirit in architecture – perhaps some of the mythic power of the pyramid – none of your boring 60s flat roofs and 50s conservatism here! The 1970 really were a time of culture clash – spawning both the Punk movement and Abba, the Velvet Underground and Pink Floyd, Bank America Tower in San Fran – everything was pointy at the end of the Modern movement, and was slightly before the 1980s camp Post-Modern movement minced onto the scene.

Although – given that the A-frame house is indisputably the very essence of a triangle or a built example of a tent, then perhaps camp, tents and A-frames go together like leather and lace? Or is that limp lettuce and lace? Sorry – it’s hard to concentrate on what I’m writing with all this disco music going on in the background. Amy Stewart – You’d better knock (knock knock) on wood. Thanks Active!

So – there was a time when A-frames actually WERE cool – you can see from some of these pictures that they are making a bit of a come-back. They’ve always looked a little lost if they’re not actually set in an alpine setting. So, just to make you feel comfortable, here’s a suitable snow-clad picture for you sensitive souls.

Sometimes they are definitely very cool indeed – this one below was in all the magazines a couple of years ago, and I think may have also been on Grand Designs NZ maybe? Its cheating a bit really, as while it does have two roof/walls, it doesn’t have two end walls – just one. So it’s a pointy 3-sided pyramid scheme thingy. From memory, the guy building it was single, and then the women folk started flocking to the house and now he’s married one – and has to move cos now he has children. Or did I just make all that up from my fevered A-frame A-class imagination?

I don’t usually focus much – if at all – on people’s private houses, but then again, this one below really caught my eye and thus craves your attention. I’ll keep the location undisclosed so as to protect the guilty (standard operating procedure in these post-Trumpian times?) but then again, I’m not sure if it is really a terrible thing that they have done, or possibly its the coolest thing on earth. It’s been butchered alright – my first thought was that it was an abomination to stick the garage on the front like that, but then they went and gave it the full circumcision. “You were only supposed to blow the bloody doors off!” But they’ve given it a true bobbiting, there’s no doubt about that.

Saves on ladder hire I suppose! I’d be keen to hear your thoughts!